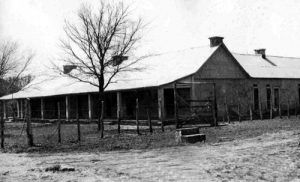 Camp Verde, Texas was one of a chain of forts protecting Texas settlers. The troops of Camp Verde did their share of Comanche fighting, but it won its major distinction as headquarters of the Army’s camel experiment. This project was the brainchild of Edward F. Beale, Superintendent of Indian Affairs for California and Nevada, who persuaded the Secretary of War, Jefferson Davis, to test camels in transporting personnel and freight in arid country.

At his urging, Congress appropriated $30,000 in 1855 to conduct the experiment. More than 70 camels, acquired by the War Department in the Mediterranean area, and a few herders arrived on Navy ships at Indianola, Texas in 1856-57 and were then herded to Camp Verde.

A specially erected caravansary, or khan, modeled after one in North Africa, accommodated them. In 1857 Beale took about 25 of them to Fort Tejon, California, while surveying a proposed road across the Southwest.

Those based at Camp Verde were tested under field conditions in various parts of western Texas. Lieutenant Colonel Robert E. Lee was in charge of the experiment. The Confederates acquired the camels when they took over Camp Verde in 1861 and they were still on hand when Federal troops reoccupied it in 1866.

Three years later, the Army relinquished Camp Verde and sold the herd to a private entrepreneur in San Antonio. Although the camels had demonstrated their superiority over mules, after the war, any project associated with Confederate President Jefferson Davis was discredited. This and other factors brought about the end of the program.

Today, there are only two remaining stucco buildings, much altered and probably dating from the 1850s, used today by the ranch owners as guesthouses. One of these is a linear barracks building, a composite of three original structures. The other building, the officers’ quarters, has a rear wing. Mounds of earth reveal the site of the caravansary. The parade ground is distinguishable. Camp Verde is located in Kerr County, on County Road 689, about two miles north of the town of Camp Verde.