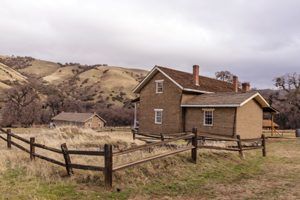 Situated in Grapevine Canyon, Fort Tejon was located on the main route between California’s great central valley and Southern California. The fort was built in 1854 to protect area citizens and the Sebastian Indian Reservation from the warlike Paiute, Chemeheui, Mojave tribes to the southeast and suppress the cattle rustling that was rampant in the area.

It soon became an important military, social, and political center. In 1858, it was the western terminus of the experimental U.S. Army Camel Corps, which utilized the imported animals to carry supplies across arid regions in the Southwest. When the Civil War erupted, the troops from Fort Tejon were sent to guard Los Angeles and later transferred east to fight in the war. In the summer of 1862, violence erupted between the encroaching white settlers and the Owens Valley Paiute, who wanted to protect their lands. Three cavalry companies of California Volunteers forcibly moved the Paiute to the Sebastian Indian Reservation, but the authorities there refused to accept responsibility for them. In 1863 several hundred of these Indians were brought to Fort Tejon, then used by the California Volunteers. The following year the Indians were transferred to the Tule River Indian Reservation. The U.S. Army closed Fort Tejon in September 1864, formally ending its career as an active military post. The land was then operated as the Tejon Ranch, utilizing the fort’s old adobe buildings as stables, storehouses, and residences for ranch workers. 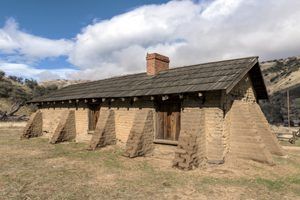 The officers’ quarters at Fort Tejon, California by Carol Highsmith.

In 1940, the Tejon Ranch Company deeded five acres, including the old parade ground, foundations, and remnants of the original adobe buildings, to the State of California to be utilized as a state park. Restoration began on the adobe buildings in 1947. Today, the site, listed on the National Register of Historic Places, maintains several restored and recreated buildings of the original fort, including the barracks, officers’ quarters, and quartermaster building.

The park is located 70 miles northwest of Los Angeles, near the top of Grapevine Canyon, via the Fort Tejon exit off I-5. 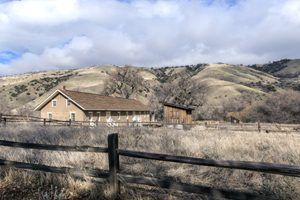 Camel Caravans in the American Desert