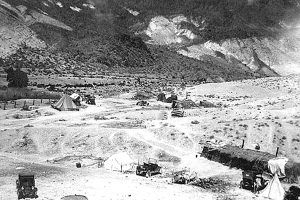 Indian camp at Scotty’s Castle in 1926

The strict segregation between white and Indian employees continued to be rigorously enforced. Any white found visiting the Indian camp was immediately fired. Living conditions between the two groups varied to a degree. Room and board, including a full three meals a day, were provided for all the white employees, the costs of which were deducted from their wages. Most of the men lived in crude temporary structures made of anything available, such as corrugated sheet metal. Often, however, there was not enough housing to accommodate everyone and some men were forced to sleep in the open air. The Indians, however, provided their own tents or wickiups and established their camp just beyond the boundaries of Johnson’s land, the location of which varied from year to year. They must have also provided their own food for no deductions for such are recorded in the weekly payroll. They did at times purchase food and sundry items from Thompson, but only on an irregular basis.

For a few years at least, the Ranch supplied itself with fresh eggs and raised its own turkeys and chickens. The remainder of the food supplies were shipped by train to Bonnie Claire, Nevada from either Tonopah, Nevada or Los Angeles, California. There were no cows on the Ranch, so all the milk they used was from a can.

Johnson vehemently opposed any drinking at the camp. There were, however, three incidents when the problem of carousing and drinking was so extreme that a whole group of men, both white and Indian, was fired and the entire camp closed down temporarily.

In September 1930, Johnson imposed further restrictions on all those working for him. Thompson reported the following the implementation of Johnson’s wishes.

“All employees have signed new working agreement including a clause permitting us to inspect all cars leaving camp, and also to the effect that men interested in prospecting will not be retained on the job. No men under 24 years old are employed, and we have cut off the aged ones, as per our talk.”

Why Johnson felt all these precautions were necessary is unclear. Nonetheless, Johnson was fully aware that the Depression put a great many men, especially in the building trade, out of work and that the situation could be worked to his advantage. In fact, Johnson had the present crew fired and an almost entirely new workforce hired in September, 1930 for the sole purpose of reducing the rate of pay for each position. Superintendent Thompson reported to Johnson:

“The work started up in full force again yesterday morning, at a total reduction in wages amounting to more than $25.00 a day under last season’s schedule. Carpenters are now getting $6 a day and board and Indians $3 without board. Other men have been reduced in proportion, and all seemed to take the reduction in good spirit.” 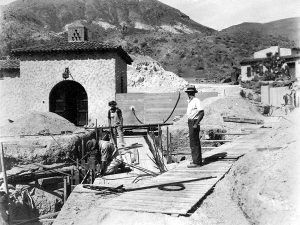 The firing of one crew and the hiring of another was repeated in February 1931 to again take advantage of the falling wage scales as a result of the Depression. The turnover of employees was incredibly high, enough so that Scott, more the frontman and the astute witness than the participant, had been known to say that it took three crews to make any progress: one coming, one going, and one working.

In the late 1920s proposals to make Death Valley a component of the National Park and Monument system were increasingly coming to the forefront. On July 25, 1930, President Herbert Hoover signed an executive order that withdrew over two million acres of land from the public domain pending the outcome of further park studies. Within months U.S. Government surveys were mapping the as-of-yet-uncharted lands within the valley. The survey team, headed by U.S. Transitman, Roger Wilson, used Ranch as a base camp and supply station, often purchasing food and equipment from Thompson.

Wilson kept Thompson informed of the survey’s progress and findings. In December 1930 Wilson apprised Thompson of an “unexpected situation” that “might possibly throw the new township line right through the main house instead of a half-mile south of it.”

The following January, Wilson explained to Thompson in great detail precisely what the situation was, Thompson immediately recounted it to Johnson.

“Mr. Roger Wilson, U. S. Transit man, was just in and explained to me the status of the survey. He says that under his present instructions the survey will place the township line north of the main house about one half mile, thus making all the improvements fall into the Park limits. This situation is caused by the wide discrepancy between Surveyor Bond’s Saline Valley survey of 1880 and Surveyor Baker’s Death Valley survey of 1884 which latter survey throws every corner one mile north and one mile west of where the corners would be if the 1880 survey were projected easterly. The 1884 survey is so incorrect that it might be advisable to throw it out entirely and bring in new lines from the 1880 survey from Saline Valley, but this cannot be done without instructions from the higher officials in the land department at Washington D. C. . . . If you could influence the General Land Office in Washington to order this to be done it will straighten out the situation here so that the Saline Valley survey will govern and thus throw all the improvements north of the park boundary line. But, Mr. Wilson says that this will have to be done quick to have any change made in his present surveys.” 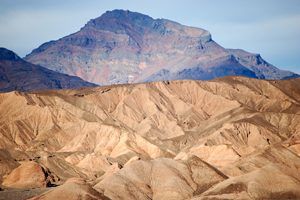 Over the next several weeks, Johnson met with a number of authorities to determine the outcome. Such uncertainty about the continued ownership of the land must have caused Johnson to rethink his plans for the Ranch. In February 1931 Johnson instructed Thompson to close the camp for a two-week period and to meet him in Los Angeles to discuss operations at the Ranch. One specific goal was to establish a lower wage scale for all workers at the Ranch. Thompson investigated present wage scales in the Los Angeles area and believed they could get workers of the same or better quality and still save $50 a day.

An entire new crew would replace all those presently working. This included the dismissal of architect, Charles Alexander MacNeilledge. The connection between the problems with land ownership and MacNeilledge’s dismissal are unclear, but they certainly coincided. Perhaps Johnson felt constrained by time and money and wanted an architect that would deliver his drawings on a more timely basis. Perhaps, even more simply, everything Johnson wanted or could hope to finish had been designed and he no longer needed any additional design work performed.

It was not too long after MacNeilledge’s dismissal and the hiring of an entirely new crew that construction ceased altogether. The final payroll was dated August 23, 1931. Although the most often heard reason for the shutdown has been the effects of the Depression on Johnson’s finances, the uncertainty of Johnson’s continued ownership of the very land upon which he built seems a more likely explanation. The very fact that both the gravel separator and the solar heater were greatly expanded in 1930, well after the stock market crash, seems sufficient to disprove that the immediate effects of the Depression caused the shut-down.