Up until 1921, Johnson had made his month-long trips to the desert a regular spring pilgrimage. He always looked forward with great anticipation the chance to leave behind the worries and demands of high finance, but generally found it hard to get away. The year 1921 proved one of mixed blessings financially. At the same time the National Life Insurance Company, of which Johnson was president, had its best year ever, another company of which he was also president, the North American Cold Storage, lost over $150,000. The loss of such a sum left Johnson depressed and resulted in a loss of confidence. While he was in this frame of mind it was harder to make split-second business decisions required of a man in his position.

In an effort to relieve his feelings, he took some time off to travel. After a one-week sojourn up north in September 1921, Johnson wrote to his sister Cliffe describing how he had felt renewed and what he hoped for the future. “The little week’s trip I had away showed me how tired I was and how much I needed a change and a rest. It is a long pull and a steady strain, with responsibility and detail every day that wears you out; but things are in pretty good shape now and I am going to try to be away a little more this coming year.” 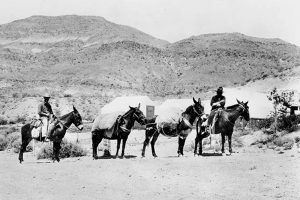 Johnson and Scott in Death Valley

A few days later Johnson informed his sister that he was going on a month-long trip with his final stop to be in Goldfield, Nevada, 60 miles away, but still the closest town of any size to his property in Death Valley. “This is hardly a pleasure trip but more of a business trip, as there are a number of things I want to look over and we are going to make some changes on the ranch.” The letter does not say who the “we” refers to or what kind of changes Johnson had in mind.

In 1922, Johnson decided to build a few crude structures to make his seasonal visits to the area more comfortable for him and his wife, Bessie. In the fall of that year, Johnson hired Frederick William Kropf to be his construction superintendent and live and work on his ranch. Kropf, trained as a carpenter in Utah, oversaw all facets of construction of the first three structures — a garage, a large two-story main house, and a cookhouse. They would all have flat roofs and white stucco finishes.

The work proceeded slowly at first with only a few men employed. Within a year, a crew of approximately 30 men lived and worked at the site. The majority of them were Indians native to the area and were either Shoshone or Piaute. The remainder were whites, generally skilled in a particular trade, such as carpentry, masonry or plastering, that Kropf had recruited in Los Angeles, California. The entire crew was divided into teams that were each assigned a different task. For instance, one team would do all the lathing and plastering and another would truck and wash all the sand and gravel. Kropf was also a firm believer in unions and maintained an eight-hour day and six-day week as the standard schedule.

Because of the extreme summertime temperatures, construction was generally suspended for the months of June and July. Almost all the building materials, such as lumber and cement, were shipped by train and delivered to Bonnie Claire, Nevada, a railroad siding on the Tidewater & Tonopah Railroad line, about 20 miles northeast of the construction site. From there, they were hauled over poor dirt roads by the Ranch’s own trucks to the Ranch itself. All the construction work was accomplished manually with hand tools. Walter Scott’s mules pulled a Fresno scraper for almost all of the excavation and grading work necessary for these earliest structures. 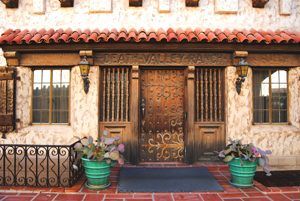 Once the main building was finished, the Johnsons took residence in the upstairs apartment. Conditions were still comparatively primitive to what the Johnsons were accustomed to in their Chicago home and what Albert thought proper and fitting for his wife, so he often visited without Bessie. Scott moved from his shack and occupied the room on the ground level just below the Johnsons’ apartment. This freed the shack Scott used for the occupancy of other employees.

Whenever Johnson was at the ranch he became deeply interested and involved in every aspect of construction. He constantly gave Kropf verbal instructions as to what he wanted done. Scott’s responsibilities relating to the construction were minimal. For the first year, Scott cooked all the meals provided to the white crew. Melba, Kropf’s daughter, was hired in August 1923, when the number of employees was increasing, to replace Scott as cook. One of the rooms in the north end of the garage, the first building to be finished, was used as a kitchen. Melba lived in the storeroom next to the kitchen in the garage.

Kropf and his son Milton put in a concrete floor and shared one of the “tie shacks” left behind from the original owner. Milton, still a young boy, helped with filling out the payroll and the monthly progress reports and sent them to Johnson’s personal secretary, Miss Devlin, in Chicago. Johnson provided all the white men with housing that usually consisted of either canvas tents or crude temporary structures. Room and board were deducted from everyone’s wages. The Indians provided their own housing that consisted of either tents or wickiups. They did not pay for room and board but their wages were usually on a lower scale.</style=”margin-top:></style=”margin-top:>

Johnson insisted that the two groups of men live separately in completely segregated camps. The Indian camp was usually farther up the canyon and beyond the limits of the property Johnson owned, where the white workmen generally resided. Johnson did not allow any alcoholic drinking and forbade the visitation of the Indian camp by any white man. If caught the perpetrator was fired. It is not known why he was so insistent upon the latter provision or which group he sought to protect. 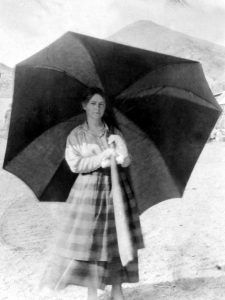 Every day that Bessie was at the ranch she held religious services that all the white men were required to attend. The location of it varied throughout the grounds. Although Albert was gaining a national reputation as a preacher, only Bessie would deliver the sermons at the Ranch. Kropf, raised as a Mormon, once interrupted Bessie and said, “For a change we would like to hear some concepts from some other religion. We will hear from this fellow.” It is not certain if this was the cause, but, it was not long afterwards Kropf was let go. His services were terminated in July 1924. Melba had been fired because of a disagreement with Bessie three months earlier.

In the winter of 1924 Johnson tried to find a replacement for Kropf and made efforts to locate Matt Roy Thompson. Thompson had been a friend of the Johnsons for quite a long time. He had first met Bessie while they were both students at Stanford University. Because of the losses his family incurred in the Panic of 1893, Thompson was forced to leave school. At approximately the same time, Bessie transferred to Cornell where she met and eventually married Albert. Thompson and the Johnsons stayed in touch infrequently over the years. When the Johnsons contacted Thompson he was employed by the Interstate Commerce Commission as a land appraiser.