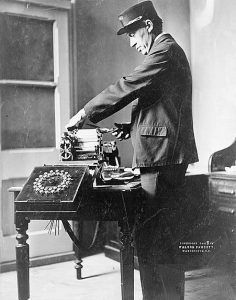 My first attempt at holding an office had proved such a flat and dismal failure that I thought I should never have the heart to apply for another. I worked faithfully in the school for about a month, and then the fever to try again took hold of me. I knew it would be of no use to apply to my former superintendent, Mr. Brink, so I wrote to Mr. R. B. Bunnell, Superintendent of Telegraph of the P. Q. & X. Railroad at Kansas City, Missouri, saying I was an expert operator and desired a position on his road. Mr. Bunnell must have been laboring under a hypnotic spell, for by return mail he wrote, enclosing me a pass to Alfreda, Kansas, and directing me to assume charge of the night office at that point at the magnificent salary of $37.50 per month. This was a slight decrease from my former salary, but I didn’t care. I wanted a chance to redeem myself and I felt confident I could be more successful in my second attempt. So I packed my few belongings, bade goodbye to the school forever, and away I went.

When I left “MN,” I said nothing to anyone about my destination, and I did not know a thing about Alfreda, except that it was near the borderline between Kansas and Colorado. The brakeman on the train in talking to me told me it was a very pleasant place; but when he said so I fancied I could detect a sarcastic ring in his voice, and I was in no doubt about it when I arrived and saw what a desolate, dreary place Alfreda was.

The only things in sight were a water tank, a pump-house, and the telegraph office; and I wish you could have seen that office. It was simply the bed of a boxcar, taken off the trucks and set down with one end towards the track. A small platform, two windows, a door, and the signal board perched high on a pole completed the outfit.

I arrived at 6:30 in the morning and there wasn’t a living soul in sight. An hour later, a big broad-shouldered Irishman who proved to be the pumper, came ambling along on a railroad velocipede. He looked at me for a minute, and after I had made myself known he grinned and said, “Well, I hopes as how ye will like the place. Burke, the man who was here afore ye, got scared off by thramps, and I reckon he’s not stopped runnin’ yit.” Fine introduction wasn’t it?

I found there was no day operator and the only house around was the section house, two miles up the track. The operator and pumper boarded there with the section boss, but the railroad company was magnanimous enough to furnish a velocipede for their use in going to and from the station. How I felt the first night, stuck away out there in that box-car, two miles from the nearest house and twelve miles from the nearest town, I must leave to the imagination. My heart sank and I had many misgivings, in fact, I was scared to death, but I set my teeth hard and determined to do my best, with the hope that I might be promoted to a better office. I did win that promotion but I wouldn’t go through my experiences again for the whole road.

One night after I had been working there for about a month, I went to my office as usual at seven o’clock. It was a black night threatening a big storm. The pumper had not gone home as yet and he remarked, that it was “goin’ to be a wild night,” but he hoped “the whistlin’ av the wind would be after kaping me company,” and with that, he jumped on the velocipede, and off he went.

I didn’t much relish the idea of the storm, for I knew the reputation of Kansas as a cyclone state, and my box-car office was not well adapted to stand a hurricane. However, I went inside, and after lighting my lamps, sat down and wrote letters and read, when I was not taking train orders. This office was kept up solely because it was a convenient place to deliver orders to freight trains at night when they stopped for water.

About 12:30 in the morning, my door opened suddenly, and a man stepped quickly in. I was startled because this was almost the only man except the pumper and the train crews that had been there since I came. Once in a while, a stray tramp had gone through, but this man was not a tramp. He wore a long overcoat, buttoned to his chin, with the collar turned up. A slouch hat pulled well down over his eyes so far concealed his face that his features were scarcely visible. He came over to my desk and gruffly asked, “What time is there a passenger train east tonight?” 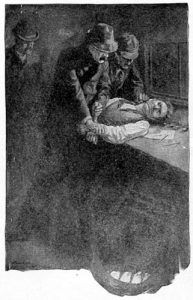 I answered that one went through at half-past one, the Overland Flyer, but it did not stop at Alfreda. Quick as a flash he pulled a revolver and poking it in my face, said, “Young man, you turn your red-light and stop that train or I’ll make a vacancy in this office mighty d——d quick.”

The longer I gazed down the barrel of that revolver the bigger it grew, and it looked to me as if it was loaded with buckshot to the muzzle. When it had grown to about the size of a Gatling gun (and it didn’t take long to do it), I concluded that “discretion was the better part of valor,” and reached up and turned my red light. Meanwhile, the door opened again, and three more men came in. They were masked and the minute I saw them I knew they were going to make an attempt to hold up the Overland Flyer. Often this train carried large amounts of bullion and currency east, and I supposed they had heard that there was a shipment to go through that night.

I was standing with my back to the table, and just then I heard the dispatcher say that the Flyer was thirty minutes late from the west. I put my hands quietly behind me and let the right rest on the key. I then carefully opened the key and had just begun to speak to the dispatcher when one of the men suspected me and said to the leader, “Bill, watch that little cuss. He’s monkeying with the instrument and may give them a warning.”

I stopped, closed the key, and was trying to look unconcerned, when “Bill,” said that “to stop all chances of further trouble,” they would bind and gag me. Thereupon two of the men tied my hands in front of me, bound my legs securely, and thrust a villainously dirty gag in my mouth. When this was done, “Bill” said, “Throw him across those blamed instruments so they will keep quiet.” They flung me upon the table, face downwards so that the relay was just under my stomach, and of course, my weight against the armature of the relay stopped the clicking of the sounder. As luck would have it, my left hand was in such a position that it just touched the key, and I found I could move the hand slightly. So I opened the key and pretended to be struggling quite a little. The leader came over and giving me a good stiff punch in the ribs, said with an oath, “You keep quiet or we’ll find a way to make you.” I became passive again, and then when the men were engaged in earnest conversation, I began to telegraph softly to the dispatcher. The relay being shut off by my weight, there was no noise from the sounder, and I sent so slowly that the key was noiseless. Of course, I did not know on whom I was breaking in, but I kept on. I told the exact state of affairs and asked him to either tell the Flyer not to heed my red-light and go through or, better still, to send an armed posse from Kingsbury, twelve miles up the road. I repeated the message twice, so that he would be sure to hear it, and then trusted to luck.

The cords and gags were beginning to hurt, and my anxiety was very great. The minutes dragged slowly by, and I thought that hour would never end, but it did end at last, and all of a sudden I heard the long calliope whistle of the engine on the Flyer as she came down the grade. This was followed by two short blasts, that showed she had seen my red light and was going to stop. “My God!” I thought. “Has she been warned?” So soon as the train whistled the men went out leaving me helpless on the table. I heard the whistle of the air brakes and knew the train must be slowing up. My anxiety was intense. Presently I heard her stop at the tank, and then, in about a second, I listened to the liveliest fusillade that I had ever heard in my life. It was sweet music to my ears I can tell you, for it indicated to me, what proved to be a fact, that a posse was on board and that the robbers were foiled. One of them was shot, and two were captured, but “Bill,” the leader, escaped. They had their horses hitched to the telegraph poles, and as “Bill” went running by the office I heard him say, “I’ll fix that d—d operator, anyhow.” Then, BANG! crash went the glass in the window, and a bullet buried itself in the table, not two inches from my head. I was not exactly killed, but I was frightened so badly, and the strain had been so great, that when the trainmen came in to release me, I at once lost consciousness. When I came to, I was surrounded by a sympathetic crowd of passengers and trainmen, and a doctor, who happened to be on the train, was pouring something down my throat that soon made me feel better.

As soon as I had recovered myself sufficiently, I telegraphed the dispatcher what had happened, and the chief, who in the meantime had been sent for, told me to close up my office and come east on the flyer, to report for duty in the morning in his office as copy operator.

That is how I won my promotion.

By John A. Hill and Jasper Ewing Brady in 1898, Compiled and edited by Kathy Weiser-Alexander/Legends of America, updated November 2021.

Author & Notes: This tale is adapted from a chapter of a book written by John A. Hill and Jasper Ewing Brady, entitled Danger Signals, first published in 1898, and again in 1902 by  Chicago Jamieson-Higgins Co. The tale is not 100% verbatim, as minor grammatical errors and spelling have been corrected.