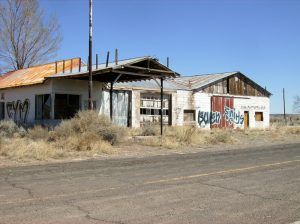 Just about seven miles west of Sanders is the small town of Chambers, Arizona. Established as a railroad siding by the Atchison, Topeka & Santa Fe Railroad, the origin of its name has two possible sources. One claim says that it was named for Edward Chambers, a vice president for the railroad. The second claim is that it was named for Charles Chambers, who established a trading post here sometime before 1888. In the early days of the railroad, J.L. Hubbell, who established the Hubbell Trading Post in Ganado, some 50 miles to the north, maintained a warehouse here to send and receive freight.

In 1907, a post office was established in the settlement, and the following year, Wells Fargo established a stage station. By 1913, Chambers was a stop on the cross-regional road that became the National Old Trails Highway and, later, Route 66. As homesteaders increased in the surrounding area, Chambers became a central meeting place with a public school by 1916. By the 1920s, Chambers had also become a railroad shipping point for feeder stock – cattle and sheep – from Hubbell’s and other trading posts to the north and ranchers and homesteaders in the surrounding area.

In 1926, the name of Chambers was changed to Halloysite for several years because of a clay mine extracting that mineral nearby. Halloysite is similar to kaolinite and is used in porcelain china. The name was changed back to Chambers on June 1, 1930. From 1960-76 wells extracted helium from beneath the surface near Chambers.

Like the other settlements along this route, Chambers has boasted several trading posts throughout the years because of its varied central place functions, early ones being sidelines of ranchers and later ones emphasizing sales of Indian souvenirs to tourists.

The unincorporated community of Chambers is located at the junction of Interstate 40 and U.S. Route 191.

An interesting side trip can be taken here to the Hubbell Trading Post. With this region’s long history of trading posts, a visit to the Hubbell Trading Post National Historic Site will give you a look at one of the oldest trading posts in the Southwest. It is still in operation today, providing all manner of local Native American products. It is located about 47 miles north of Chambers — follow US 191 north to Ganado, Arizona. 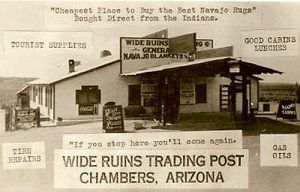 If you take this side trip to the north, you will pass by Wide Ruins, some 17 miles north of Chambers. This was the former site of an impressive Chacoan-style pueblo ruin named Kin Tiel. Unfortunately, the walls of Kin Teel, some of which were 12 feet tall, were pulled down to extract building stones for the construction of a trading post about 1895.

When a few rooms were excavated in 1929 by Haury and Hargrave for the National Geographic Society, it was determined that the outer walls and terraced dwellings looked down on open courts. From the beams in the kiva roofs, archeologists estimated these rooms were built between 1264 and 1285 A.D., indicating Pueblo III and early Pueblo IV periods of occupation. Unfortunately, in about 1895, these walls were pulled down to extract building stones to construct a trading post. A trading post remained here for decades until it closed and was also torn down in the 1980s. Sadly, there is nothing that remains of this once magnificent pueblo.

Continue your journey along Route 66, just a short seven miles to Navajo, at Exit 325.