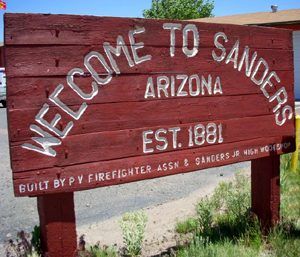 Less than ten miles southwest of Houck, Arizona, is the small unincorporated community of Sanders, located at the junction of U.S. Route 191 and Interstate 40, within the Navajo Nation. This settlement started as yet another station on the Atchison, Topeka, and Santa Fe Railroad. The reason it was called Sanders is still in dispute. Some say it was named after C. W. Sanders, a railroad office engineer. Others believe it was named for  Art Saunders, who had a trading post nearby. However, because there was already a railroad station named Sanders, the community was renamed Cheto. It gained its first post office in 1896, but it would only last for a few years. The need for a post office was inconsistent. In 1932, when it reopened, the name changed to Sanders.

Like many other places across Arizona, trading posts predated the establishment of the community. One of the first stores here was established by G.W. Sampson in 1883. This is the very same one that Art Saunders would later operate. One of the most long-lasting stores was the Cedar Point Trading Post situated on Route 66. It was established in 1928 and was operated by several proprietors until 1980. Though the earliest trading posts are gone today, you can still stop at Burnham’s Trading Post. Though operating today in a building that is about 30 years old, the Burnham family has owned the trading post continuously since the 1890s. It is located along U.S. 191, exit #339.

Also at this exit is the old Sanders Bridge on an abandoned section of Claymine Road (former U.S. 66). Built in 1923, this Pratt pony truss bridge over Puerco River is listed on the National Register of Historic Places. Though closed to vehicle traffic today, pedestrians may still use the bridge.

Today, Sanders is called home to about 630 people.