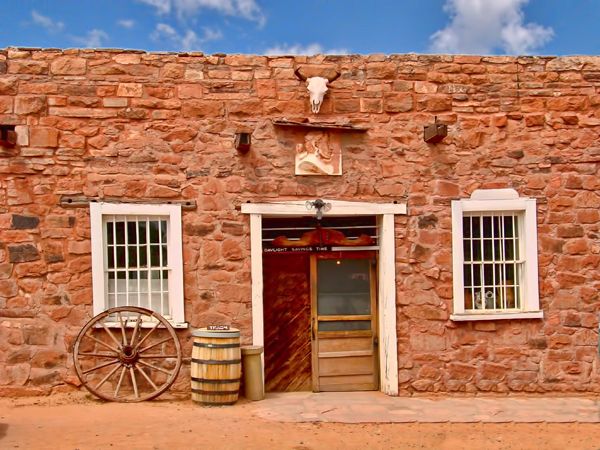 Located in Ganado, Arizona, on the Navajo Reservation, the Hubbell Trading Post was established by John Lorenzo Hubbell in 1878. It is one of the oldest operating trading posts in the American Southwest, where the differing cultures of the Indians, Spanish, and Anglo-Americans have come together for mutual benefit. For almost 90 years, the Hubbell family welcomed traders and notable visitors to trade with the Navajo. The Spanish roots and character of this family not only influenced the lives of the Navajo but also of the visitors that they encountered.

The Hubbell family eventually sold the post in the 1960s to the National Park System, but the Western Parks Association has continued to operate it as a trading business as if it were still under the management of John Lorenzo Hubbell and his family. Today, visitors can learn about the Navajo’s heritage and their material culture, witness traders negotiating deals with American Indians, learn to weave Navajo rugs, and purchase crafts and art from the Indians at any of the trading post’s shops.

Although John Lorenzo Hubbell established the post in 1878, the story of Hubbell Trading Post begins in the early 1860s, when General James H. Carleton began forcibly removing the Navajo Indians from their homelands in an effort to find gold in the Navajo territory. Leading this gruesome campaign was Colonel Christopher “Kit” Carson who, under the direction of Carleton, instituted a “scorched earth” policy in the Navajo territory. Under this policy, Carson’s troops destroyed the Navajo’s livelihood by killing their livestock and burning their homes and crops. To terrorize the Indians into leaving their homelands further, Carson and his men massacred Navajo men, women, and children.

By the winter of 1863, after suffering from starvation and fearing the loss of more people, the Navajo surrendered to Colonel Carson’s troops. The following year, Carson and his troops rounded up the Navajo who survived General Carleton’s vicious campaign and forced over 8,000 Navajo to walk more than 300 miles from northeast Arizona to Fort Sumner in eastern New Mexico. Known by the Navajo as the Long Walk to the Bosque Redondo, a 40 square mile reservation on the Pecos River, this episode changed the Navajo world and had a significant influence on their material culture and economic pursuits.

While living at the Bosque Redondo reservation, the Navajo attended school, practiced Christianity, and learned to incorporate in their daily lives, many new materials, which the people used to make the crafts that the Navajo exchanged with traders for food and other products that were essential for their way of life.

Following the return of the Navajo from the Bosque Redondo, traders continued supplying them with the materials they had grown accustomed to using during their four-year exile. Among the traders to establish a successful relationship with the Navajo was John Lorenzo Hubbell. Hubbell not only developed an industry from the Navajo crafts but also helped the Navajo adapt to their new environment and readjust to reservation life. He had become familiar with the Navajo language and traditions while traveling around the Southwest as a Spanish interpreter for the U.S. military. Hubbell was able to use his knowledge of the Navajo culture and language to establish perhaps the most successful trading empire in the American Southwest. He opened the trading post that is now Hubbell Trading Post National Historic Site in 1878, ten years after the Navajo returned to their homeland from their Bosque Redondo exile. 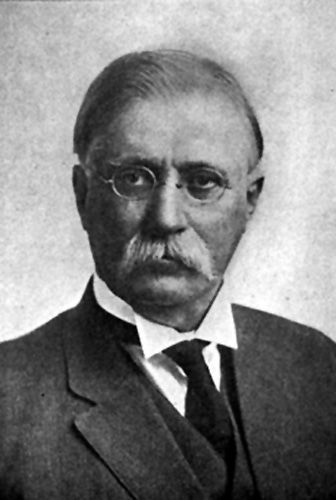 John L. Hubbell was the son of James Santiago Hubbell of Connecticut, who came to the Southwest as a trader on the Santa Fe Trail. James married Juliana Gutierrez, a descendant of a Spanish colonial land grant family and one of the heirs to a land grant south of Albuquerque, New Mexico. Already a prominent merchant trader, Santiago Hubbell served in the Union Army during the Civil War and then became a military contractor, supplying several posts, including Fort Wingate, New Mexico. The couple was influential in New New Mexico Territorial affairs.

John, later known as Don, a Spanish term of respect, was born on November 27, 1853, at Pajarito, New Mexico Territory. He did not learn to speak English until age 12. After clerking in an Albuquerque, New Mexico post office and a Mormon trading post in Kanab, Utah, he made his way to Arizona in the summer of 1873. Because he spoke English, Spanish, and Navajo, he was employed as an interpreter for the U.S. Army at Fort Defiance, Arizona the following year. 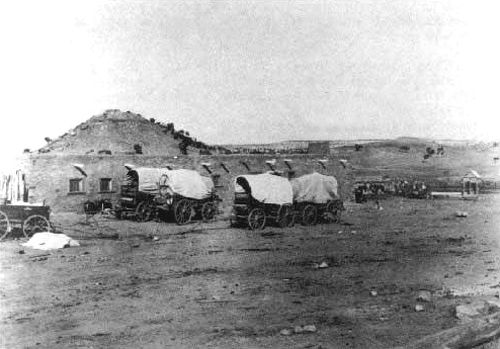 By 1876 he owned his first trading post, and in 1878 he acquired a second. It was at this second trading post, that he established a permanent homestead and live for the next 50 years. Located half-way between the two earliest Indian Agencies in the region — Navajo at Fort Defiance and Hopi at Keams Canyon, the post became an important stopping place for government officials and other prominent visitors. With his ability to speak English, Spanish, and Navajo he was able to communicate fluently with nearly all of his patrons.

Situated on the Navajo Reservation, Hubbell encouraged them to create silver jewelry, woven baskets, and Navajo rugs to trade and sell to him in return for money and groceries at the trading post. The Indians also exchanged their wool, sheep, corn, and pinon nuts for items such as cloth, flour, seeds, and canned goods. In addition to the trading, Hubbell also hired local Navajos to help build his house and a local Indian school which he graciously donated the land for. Before long, a settlement sprang up around the trading post. Called Ganado, it was named for a Navajo friend of Hubble’s named Tom Ganado, who had a camp at the Pueblo Colorado Wash nearby.

Hubbell’s success as a trader was due in part to his knowledge and respect for Navajo culture, his fairness, and honesty in all business dealings, and his cordial relationships with various Navajo leaders. In the late 1870s and early 1880s, Hubbell greatly expanded his trading empire by establishing posts throughout the Navajo lands. During this time, he was also involved with a Spanish woman by the name of Lina Rubi. Though the two would later marry, they would have three children prior to making their relationship “official” — Adella in 1880, Barbara in 1881, and Lorenzo, Jr. in 1883. In the meantime, J.L. Hubbell was elected sheriff of Apache County in 1882, a position he held until 1886.

A few years later, he and Lina would marry on July 27, 1891, at St. Johns, Arizona. Just a few months later, their fourth child, Roman was born in the fall. As the children began to grow, Lina and the children also maintained a home in Albuquerque, New Mexico, where they lived during the school year. It was Lina’s wish that her children be educated as ladies and gentlemen.

The trading post at Ganado became the headquarters of Hubbell’s numerous and diverse enterprises, which grew to include wholesale houses, several ranches and farms, business properties, saloons, and stage, freight, and mail lines. His interests employed more people at any given time than any other post in the region. Many of his employees were of the Navajo tribe as well as extended family members. 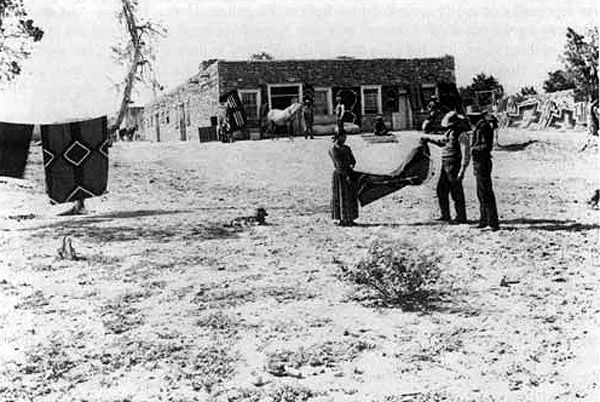 They worked in a wide range of jobs, including clerking in the posts, domestic chores, work on the farms, livestock herding, freighting, mail-carrying, blacksmithing, construction, tourist services, and demonstration weaving. The pay was usually in trading post tokens redeemable only at Hubbell posts. However, Hubbell kept many of his employees housed, fed, and clothed, even during the Depression years.

Don Lorenzo Hubbell became one of the most respected and well known Navajo Indian Traders of his day. To those who knew him, he was called by several different names: The Navajo called him Nakeznilib – Double Glasses or Wearing Spectacles. He was also called Naakaii Sanf – Old Mexican. His Hispanic relatives called him Don Lorenzo. His business acquaintances, correspondents, and fellow politicians called him J.L. The Rubi family referred to the Hubbell Family as Los Hobles. This was an affectionate term that implied that the Hubbell’s were of Hispanic heritage.

In 1912, he served as a senator on the Territorial Government which met annually. The very next year, he lost his wife Lina on January 13, 1913. Just 54 years old at the time, she was buried on Hubbell Hill at Ganado, Arizona. Shortly after becoming a member of the Territorial Government, Arizona had achieved statehood in 1912 thus elevating Hubbell to the status of State Senator. In 1914, at age 61, Hubbell essentially ended his political career with an unsuccessful run for the U.S. Senate.

In his later years, Hubbell wrote his memoirs entitled “Fifty Years an Indian Trader”, met every American president from Grover Cleveland to Warren G. Harding, hosted Theodore Roosevelt in his home for a week, and expanded his enterprises to include an automobile dealership and a gas station in Winslow, Arizona. In 1930 Don Lorenzo Hubbell died at the age of 77 at his home in Ganado. He was buried along with other family members and friends on Hubbell Hill, a cone-shaped hill overlooking the trading post. He is said to be the only Caucasian buried on Navajo land. After his death, his two sons succeeded him in his various businesses. Over the years, various family members ran and worked at Hubbell owned businesses; but, the years took their toll.

In 1954, the Hubbell’s declared bankruptcy and sold or closed the remaining related enterprises, leaving only the Hubbell post at Ganado still functioning. The last family member to operate the trading post was his daughter-in-law Dorothy Smith Hubbell. She ran it as a museum until the National Park Service took responsibility for it as a National Historic Site, in 1967.

Once inside the masonry post, visitors will find a salesroom, a large storage room, and two office rooms that housed all of the trading post’s records from the time of its establishment. Today, these rooms house a unique collection of pioneer artifacts and Navajo art. Behind the trading post stands the Hubbell family home, which also displays a collection of Navajo artwork. 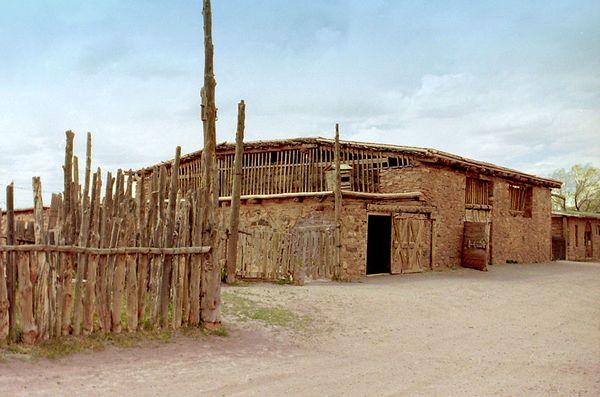 The trading post and Hubbell home look much today as they did during Lorenzo Hubbell’s time. Touring the Visitor’s Center, people can learn from a skilled Navajo artist how to weave an authentic Navajo rug, purchase food and other goods at the bullpen; buy a Navajo rug, jewelry, and baskets; attend the “Sheep is Life” workshop to learn about the Navajo lifestyle; and attend a Native American art auction.

The Hubbell Trading Post National Historic Site is located one mile west of Highway 191 on U.S Highway 264 in Ganado, Arizona. There is an admission fee. 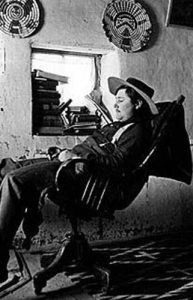 I know a lot of people have the idea that an Indian trader is a first class scoundrel – a man who attains financial prosperity by fleecing the Indians. There may have been some that have, but they didn’t last long. I’ve been an Indian Trader for fifty years, but I’ve dealt honestly with them. I’ve never taken a dollar from an Indian without giving the Indian value received, and I’ve often given the Indians what should have been my own legitimate margin of business profit just to help them when they need it.