The railroad still runs in this area, by Kathy Weiser-Alexander.

Like nearby Lupton, Arizona, and other towns in northeast Arizona, the area around Allentown was long inhabited by the Navajo people. The town got its start when the Atlantic & Pacific Railroad was built in 1881 and 1882. It was named for construction superintendent Allan Johnson. 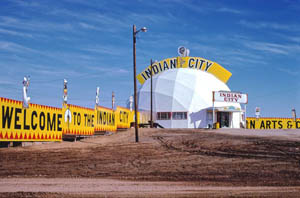 The old Indian Village at Allentown, Arizona in 1979. Photo by John Margolies.

One of the first non-Indian residents in the area was a man named Curt Cronemeyer, who established a trading post some distance south of the railroad tracks. Cronemeyer had two Navajo wives, and the land upon which his trading post sat may have been allotted to one of them. Cronemeyer, of German descent, was an interesting character, leaving an impression upon those who lived in the area. Said to have been a notorious ladies’ man, the impression he left on some, was not always a good one. In June 1915, he, along with another man named McDonald were robbed, shot, and killed at the trading post. According to Navajo oral history, the 49-year-old trader was confronted at his store by a number of Navajo men, accusing him of flirting with their wives. Cronemeyer protested his innocence, but the Navajo were having none of it and one of them shot him. However, newspaper articles later related that the Gallup, New Mexico sheriff was tracking a group of Mexican bandits to El Paso, Texas, where they eventually confessed to the murder and were apprehended.

The community of Allentown, first established as a railroad siding, never grew very large. It obtained a post office in 1924 and when Route 66 came through, it boasted a gas station, grocery store, curio shop, and cafe. However, its post office closed in 1930. The original townsite, next to the railroad, was located about a mile south of I-40. Today, there are a few remaining businesses along I-40. For years, visitors along this stretch of the road associated Allentown with a large geodesic dome structure that housed Indian City. Though the domed building is gone, folks can still visit a new and modernized “Indian City.”