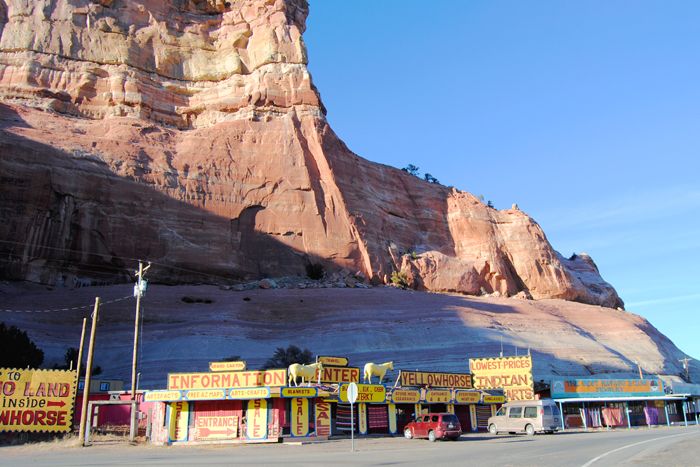 Situated right at the New Mexico–Arizona border, Lupton, also known as Painted Cliffs, invites visitors with high sandstone bluffs, where statuesque figures of deer, bear, and eagles peer down from above. These beautiful cliffs,  formed from 60 to 200 million years ago, typify the stark, lonely beauty of the Indian country to the north.

Immediately, travelers are surrounded by a number of trading posts at the base of the cliffs, selling all manner of Indian treasures. Several of these have been in business since the birth of Route 66, including the Tee-Pee Trading Post. Lupton is also home to the Painted Cliffs Welcome Center, a great visitors’ stop on the way into the state.

Known as Tesesi’ani’ (Setting Rock) and Tsedijooli (Round Rock) to the Navajo, Lupton has been inhabited on an intermittent basis for more than 200 years. Prior to the establishment of Fort Sumner, New Mexico, it was a central point of departure for military expeditions and supply routes. 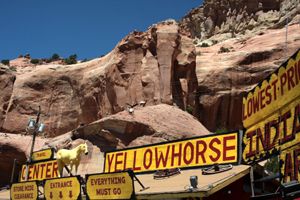 In 1863 and 1864, the United States government, as a part of an Indian removal effort, forced the Navajo to depart from the area and relocated them to Fort Sumner, New Mexico. This evacuation is known as The Long Walk of the Navajo, or the Long Walk to Bosque Redondo. The government’s objective was to “Americanize” the Navajo. However, the site the government chose was not adequate for agriculture and the entire idea, a miserable failure. In 1868, the Navajo were finally given sovereignty and allowed to return to their lands.

The first trading posts at Lupton were established during the decade following the Navajo’s return from Fort Sumner. In 1905, Lupton became the site of the first railroad station established by the Atchison, Topeka & Santa Fe Railroad in Arizona. The station was named for G.W. Lupton, a trainmaster in Winslow, Arizona. Before long, more people settled in the area and more trading posts were established. A post office was established in May 1917 with Joseph D. Gorman as the first postmaster.

At about that same time, the National Old Trails Highway was blazed, and in 1926, Route 66 would follow most of the same path. This created tourism opportunities in Lupton and the town sprouted several gas stations and a store. Today, Lupton is called home to just about 25 people.

By Kathy Weiser-Alexander, updated May 2019.