During the evening of the 25th, General Grant issued orders to Generals Thomas and Sherman to pursue Confederate General Braxton Bragg. The next morning, General Sherman advanced by way of Chickamauga Station, and Thomas’ troops marched on the Rossville Road toward Graysville and Ringgold. In the vicinity of Ringgold, Cleburne’s Confederates held a strong position on Taylor’s Ridge covering General Bragg’s retreat. Cleburne’s men repulsed a Union attack, inflicting heavy casualties until Bragg’s army had successfully withdrawn southward, and then they followed. Union troops then occupied Taylor’s Ridge. There the pursuit stopped. This decisive Union victory raised the siege of Chattanooga. 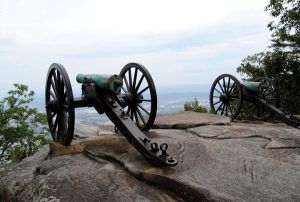 In recommending the creation of the park, congressional committees pointed out that probably no other field in the world presented more formidable natural obstacles to large scale military operations than the slopes of Lookout Mountain and Missionary Ridge. Since the purpose would be to maintain the park in its historic condition, they also noted that there had been scarcely any changes in the roads, fields, forests, and houses at Chickamauga since the battle, except in the growth of underbrush and timber. Taken together, these battlefields offered unparalleled opportunities for the historical and professional military study of the operations of two great armies as they both encountered the multiple military obstacles created by forests, steep mountains, open fields, and streams. From strategically placed observation towers placed on the Chickamauga Battlefield, Missionary Ridge, and Lookout Mountain, observers and students could comprehend the grand campaign that extended over a 150-mile front and follow many tactical details of the actual battle. No battlefield park of this quality and magnitude could be found in any other location in the world.

The park features some 1,400 monuments and historical markers on the battlefields, and numerous hiking trails. The Chickamauga Battlefield also features a seven-mile self-guiding auto tour and horse trails. The Visitor Center at Chickamauga contains exhibits and the Fuller Gun Collection which contains over 300 examples of military long arms. The Lookout Mountain Battlefield also features hiking trails, scenic vistas, the historic Cravens House, and a visitor center. Efforts continue today to protect and preserve the park’s many cultural and natural features while providing an inspiring experience for visitors.