Resuming the run, the train stopped at each station, reporting the would-be robbery and sending word for law officers to look out for a badly wounded man near the scene of the hold up.

Ketchum later reported, “I tried a dozen times to mount my horse but was too weak to do it.” Weary and dizzy from the pain, he sat down to wait for the posse. Early the next morning as the sun was coming up, a freight train heading from Folsom passed by the robbery scene. A man was seen about 100 yards from the train, waving his hat on the end of his gun, as a signal. When the train was stopped and the conductor and brakeman approached, Black Jack drew a gun on them. The conductor said, “We just came to help you but if this is the way you feel, we will go and leave you.” Black Jack responded, “No boys, I am all done, take me in.” (In other accounts, Sheriff Saturinino Pinard is credited with the arrest). Black Jack was carried to the train, placed in the caboose and taken into Folsom.

At first, Black Jack stated that his name was George Stevens and that the would-be robbery was his first attempt at a hold up and a mighty poor one. He was taken on the first passenger train to Trinidad, Colorado and placed in San Rafael Hospital, where his arm was amputated. When he was able to travel, he was taken to Santa Fe for safekeeping. Later, he was transferred to Clayton, New Mexico for trial, where he plead innocent, but the judge found him guilty and sentenced him to death by hanging. 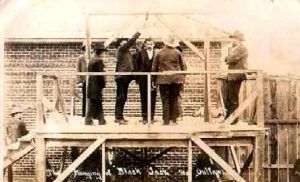 The hanging was delayed several times until lawmen heard rumors that the old gang was going to attempt to free Tom. Therefore, a decision was finally made and the hanging was scheduled on April 26, 1901 at 8:00 a.m. The hanging was a big attraction with stores closing and saloons remaining open, doing a brisk business. People came from all over the area to see the big event, where the local lawmen were selling tickets to view the hanging, as well as little dolls of Tom  hanging on a stick. 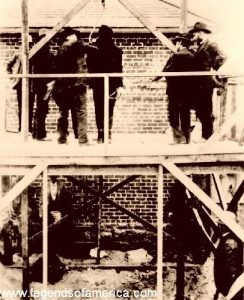 Black Jack Ketchum was the only person ever hanged in Union County, New Mexico. He was also the only person who suffered capital punishment for the offence of “felonious assault upon a railway train” in the State of New Mexico. Later, the law was found to be unconstitutional, but way too late for Thomas Ketchum. According the annals of American Jurisprudence at the time, he was the only criminal decapitated during a judicial hanging in the U.S. The only other recorded example was in England in 1601. Later, the same thing occurred at the hanging of one Eva Dugan at the Pinal County, Arizona prison in 1930. 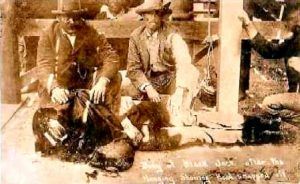