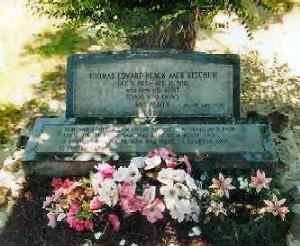 Thomas “Black Jack” Ketchum was the only person ever hanged in Clayton, New Mexico. He was also the only man ever hanged for train robbery in the entire state, a law that was later found to be unconstitutional. But, it was a little too late for poor Black Jack.

Remembering his experience long ago, a gentleman tells a story of meeting Black Jack Ketchum while camping at the Philmont Scout Ranch.  He and several other scouts were backpacking through the mountains, visiting various historic sites, including an abandoned gold mine, a ghost town, and one of Black Jack Ketchum’s outlaw hideouts.

The hideout was a large rock overhang, and the scouts thought it would be fun to camp there for the night. However, their leader insisted that they stay at a nearby-designated site. Disappointed, several of the scouts set their tents up several hundred feet away from the leader’s tent, hoping they would have a chance to sneak back to the hideout later that night.

About 11:00 p.m., when the rest of the camp was fast asleep, five scouts gathered their sleeping bags and quietly stole back to the hideout. They set up camp under the overhang and built a fire, where they sat around talking about their trip. When the fire burned down to nothing more than red coals, the scouts settled down in their sleeping bags. The storyteller drifted off to sleep thinking about Black Jack. Suddenly, he was awakened by a noise in the bushes. He said he felt paralyzed, unable to move, and tried to call out to the others, but his throat was all knotted up. 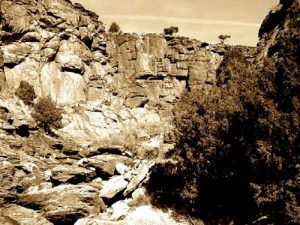 Then he saw a cowboy dressed all in black come running out of the bushes toward the hideout. He said the man was mostly solid, but some parts of him appeared translucent. He described the man as filthy dirty, with a tattered hat, clothes from the 1800s, and yellowed teeth. His face was very red, glistening with sweat, with lots of facial hair, and the apparition held a revolver.

The cowboy was unaware of the scout, but the boy was terrified, as much by his inability to move than by the man. As he watched, a strange fog emanated from the tree line across from a small stream, and he could hear men yelling unintelligibly and then muffled gunfire. The cowboy turned and fired his revolver six times into the trees and then ran and stood right over the scout. The cowboy was wounded in the shoulder and discharged six shell casings from his revolver right on top of the boy.

As he watched, the casings disappeared as they fell onto his sleeping bag. The cowboy then reloaded his revolver, fired additional shots into the trees, and suddenly the cowboy saw the scout. The expression on the cowboy’s face indicated that the scout had just suddenly appeared before his eyes. The cowboy seemed to be confused and confounded, while the scout was terrified. Then, the cowboy un-cocked his pistol, looking at the scout very closely, and said, “You’re not supposed to be here,” and then just disappeared into thin air.

Eventually, he could go back to sleep but had to be shaken repeatedly by his fellow campers before waking in the morning. As the scouts broke camp, the boy told his fellow campers about the “dream,” who were amused by the story. But, as the scout rolled up his sleeping bag, he found six shell casings in the dust.

Later, when they returned to base camp, the scout visited an old saloon, where a photograph of Black Jack Ketchum was displayed. The photograph was the same man that the scout had seen at the hideout.

When he told his friends, they brushed him off, setting them up for a big hoax and the scout never told anyone about it again, but he kept the shell casings. After the scout returned home, he checked with a gun expert who said the casings were dated from sometime around 1878 but were in almost brand new condition, and the gunpowder could still be smelt in them. In fact, gunpowder was one that was used in the last century, but not today.

The scout kept the casings for years, but unfortunately, after he moved away from home, his mother threw them out along with several other items the boy had saved, such as comic books and baseball cards.

Some hauntings have an eerie resemblance to life, where ghosts are busy with activities common to living people, such as walking around or working. “Ghost Experts” describe these hauntings in several ways.

The first is that the ghost is simply doing something that they frequently did in life. The second assumes that the sci-fi concept of the time-space continuum is real and that sometimes two-time frames overlap. The third explanation is a “place memory,” which is like recording a past event that has imprinted itself on the environment. Images and sounds are impressed upon a place and later replayed in a phenomenon similar to watching a loop of a movie film.

So, perhaps there is no ghost in these types of “hauntings,” but rather, some psychic “record” of a person from long ago.