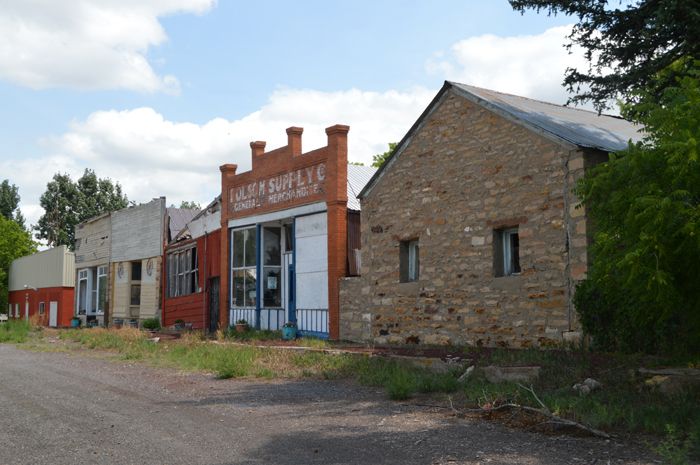 Buildings on the south side of Folsom, New Mexico, by Kathy Weiser-Alexander

Situated on the Dry Cimarron Scenic Byway, Folsom is a semi-ghost town sitting at the junction of New Mexico Highways 325 and 456 in Union County, New Mexico.

When we traveled this route last time the “Dry Cimarron” River, actually was flowing with water. By Kathy Weiser-Alexander.

Lying in the wide Cimarron River Valley and surrounded by buttes, mesas, and old volcanic cones, this area was long utilized as hunting grounds for the Comanche, Ute, and Jicarilla Apache Indian tribes.

The first white settlement in the area was Madison, settled in 1862 and named for its founder, Madison Emery who built a cabin at the site. As more families arrived, homes, stores, and other businesses sprang up and Emery also erected a rough hotel. In its early days, Madison was the nearest settlement to the “Robbers’ Roost” just north of Kenton, Oklahoma, which was home to a band of outlaws led by Captain William Coe in the late 1860s. When the outlaws sensed a raid on their “Roost”, they would often hide out in Madison. Coe was eventually caught in Madison by the US Cavalry with the help of Emery Madison’s wife and step-son. He was taken to Pueblo, Colorado to await trial, but was lynched by a group of vigilantes before he had a chance. After Coe was captured and killed, the rest of the gang must have scattered because they were never heard from again.

In 1877 a post office was established at Madison. The coming of the Colorado and Southern Railroad in 1887 killed the settlement because the line bypassed the town. Madison’s post office closed in 1888. Today there is little physical evidence that it ever existed except foundations of an old grist mill.

The Colorado and Southern Railroad cut across the northeast corner of New Mexico in the late 1880s and many of Madison’s former citizens moved to the new town that sprang up about eight miles to the northeast. The railroad was the only one in the northeast part of the state until 1901. The community was first called Ragtown because the shelters and business establishments were all tents. When the bride-elect of President Grover Cleveland, Francis Folsom, stepped off the train to explore the little town during a whistle-stop, the townspeople were smitten by her charms and the town was named for her. Folsom gained its post office in 1888 after Madison’s closed.

One of the first citizens in Folsom was W. A. Thompson who was the proprietor of the Gem Saloon and deputy sheriff. Arriving from Missouri, where he had been charged with murder, he quickly racked up a lurid record in Folsom. He was said to have shot and killed a friend because he visited another saloon. On another occasion, enraged at a boy for taunting him, Thompson chased the boy with a six-shooter and when he failed to catch him, turned his guns on a fellow officer and a customer emerging from a store, killing one of them. Though Thompson was captured and tried in Clayton, New Mexico he was acquitted and went to Oklahoma, where he was said to have killed another man.

Late in the 1880s, two Dallas investors put together nearly $50,000 to build a mineral springs resort just east of town. Their plans included a hotel on the edge of a canyon and the building of a dam to create a small lake for fishing and boating. When Hotel Capulin was almost complete, the investors got into a dispute and dropped the project completely. Afterward, the investors never returned and the magnificent hotel was abandoned. Locals then used the building for parties, vagrants moved in, and bits and pieces were taken for the structure for other building purposes. The flood of 1908 finally washed away what was left. 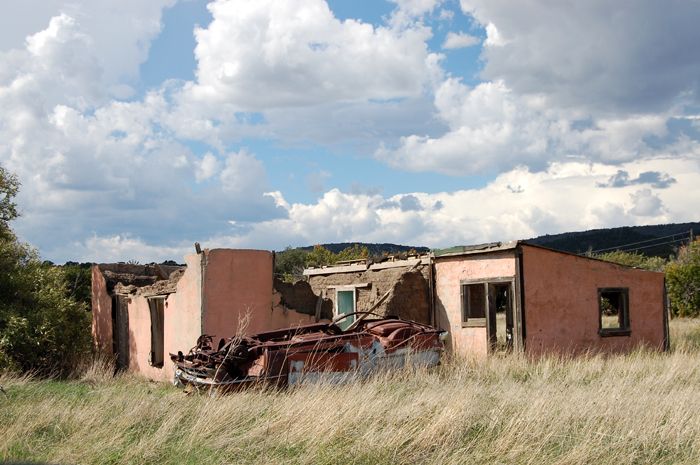 The town prospered in its early years with the largest stockyards west of Fort Worth, Texas and a number of land speculators working in the area. Numerous homesteaders moved in and established farms and ranches. The area cowboys and farmers relied on the town for supplies and a taste of civilization. The town boomed with as many as 1,000 people in the area and the town responded with hotels, restaurants, supply stores, two mercantile stores, doctors, newspapers, and three saloons. Three school houses were built after the first two burned.

On September 3, 1897, the Ketchum Gang held up the train near Folsom. Sam Ketchum and several other men held up the train at the same site on July 11, 1899. A posse caught up with them in Turkey Canyon and a fight ensued in which Sheriff Edward Farr of Walsenburg, Colorado was killed. Sam Ketchum and Elza Lay were wounded as were five of the eight members of the posse. Henry M. Love, another posse member died of his wounds four days later. Sam was taken to the penitentiary at Santa Fe where he died of his wound. Elza Lay, who had made his escape, was later sent to the New Mexico Territorial prison

On August 16, 1899, Tom “Black Jack” Ketchum tried to hold up the train at the same place by himself and was seriously wounded by the conductor, Frank E. Harrington. Ketchum was picked up beside the tracks the next day. His arm was amputated on September 9 while he was awaiting trial. He was hanged on April 26, 1901, at Clayton, New Mexico.

By the early 1900s, the area was still doing well but the town’s population had fallen as many of the homesteaders found that the area proved unsuitable for farming

In 1908 the town had a new telephone switchboard which was operated by Sarah J. Rooke in her home on the edge of town. Sarah was an older unmarried woman. On August 27, 1908, Sarah answered her buzzer to hear a voice shouting that a flash flood was racing down the river and would strike the town within minutes. Sarah rang one phone after another warning people to get out of town before the water hit.  She was still sitting at her switchboard when her own house was swept from its foundations and her body was later found eight miles below the town. Most of the town’s buildings were carried away and 18 people, including Sarah Rooke, drowned. She was buried at the Folsom Cemetery south of town. A granite monument with a plaque was erected by her fellow workers. This was not the first flood in the town, as a report in the Folsom Metropolitan reported on another damaging incident in August of 1890. 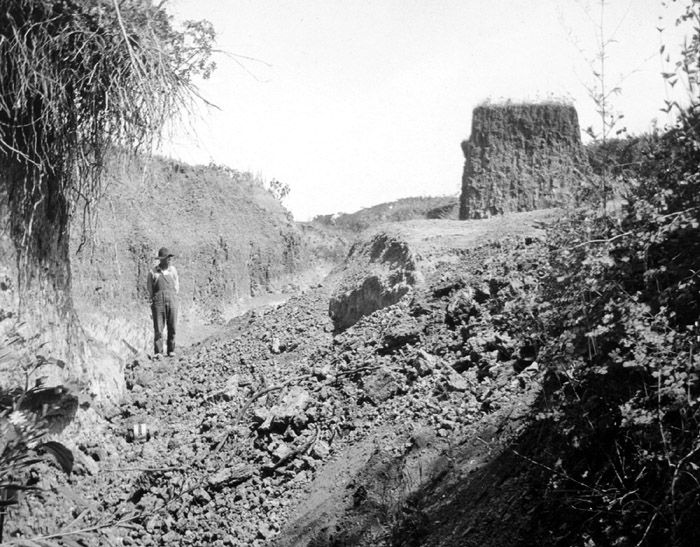 A flash flood in 1908 exposed this archaeological site near Folsom, New Mexico. The site was named for the nearby town of Folsom.

Shortly after the flood if 1908, George McJunkin, an African American cowboy, amateur archaeologist and historian, who was working as a foreman on the Thomas Owens Pitchfork Ranch, discovered remains of a giant prehistoric bison in Wild Horse Arroyo about eight miles west of Folsom. Though it would be years before the site was excavated, when it finally was, archaeologists found 32 skeletons and at least 26 spear points, now known as “Folsom Points”. This discovery changed the thinking in the world of archaeology, pushing the presence of man in North America back by at least 5,000 years to 12,000 years. The site was declared a National Historic Landmark in 1961.

Slowly, most of the homesteaders gave up as the weather turned drier. The remaining farmers accumulated the abandoned land into larger plots. However, as the area continued to suffer from drought, most of the farming holdouts gave up as well. Cattle and sheep ranchers bought up the farmlands that eventually returned to pasture.

A high school operated briefly in Folsom, but it only graduated three students in 1931. Folsom’s elementary school closed in 1958, at which time the students were transferred to Des Moines, New Mexico. The school still stands and is used today for community events. By 1960, Folsom was called home to 142 people. The Doherty General Merchandise Store, built in 1896, stayed open until 1959.

Now a semi-ghost town, Folsom is a pleasant ranching community, called home to about 60 people and several historic buildings. The old 1888 railroad station was moved from the right-of-way around 1970 and is now used as a storage building and next to it, on the corner is the old Texaco gas station which was built sometime before 1946. Across the street is the Doherty Mercantile building, which became the Folsom Museum in 1966. The abandoned stone two-story Folsom Hotel still stands on the south side of Main Street along with several false-front stores. 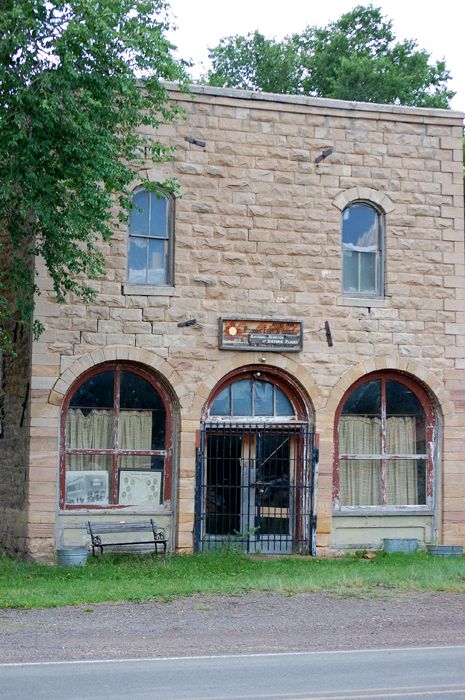 On the north side of Main Street, is an active post office. St. Joseph’s Church continues to provide services at 118 N. 2nd Street and a cemetery is situated east of the church.

The Capulin Volcano National Monument, rising to an elevation of 8,182 feet, is located seven miles southwest of Folsom on New Mexico Highway 325. 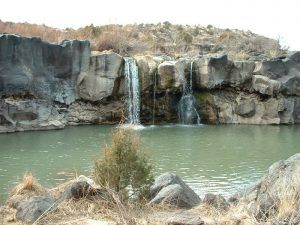 About 3.5 miles northwest of Folsom, is the site of Folsom Falls, a natural spring-fed waterfall, which long served as a favorite fishing hole and picnic grounds for area residents. Unfortunately, it sits on private land behind a gate and the public is no longer allowed to visit today.

About eight miles north of Folsom, Highway 456 intersects with Highway 551. North on 551 is Toll-Gate Canyon where Charles Goodnight trailed many herds of cattle from Texas to Wyoming from 1866 to 1869. Between 1871 and 1873, Bazil Metcalf constructed a toll road from the Dry Cimarron through Tollgate Gap, providing one of the few reliable wagon roads between Colorado and New Mexico. This road remained an important commercial route until the Colorado and Southern Railway came through in the 1880s. 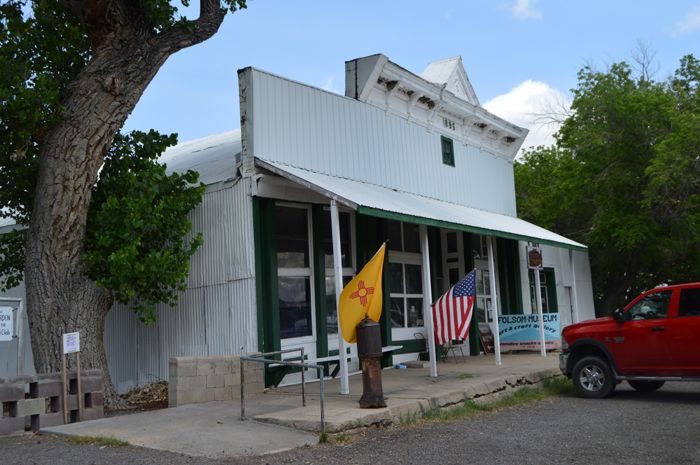 Death of a Sheriff – Murder and Conspiracy in the Old West