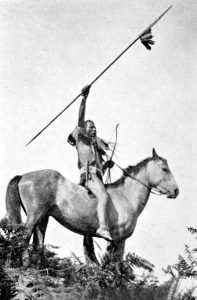 The time has arrived when it becomes necessary to determine the question of peace or war between the citizens of the United States and Indian tribes on this frontier.

The Territory of Washington was organized from a portion of Oregon Territory on February 8, 1853. Less than a month later, Isaac Stevens, a military officer and firm supporter of Franklin Pierce’s candidacy for President in 1852, was appointed as the new territory’s first governor on March 2, 1853. Stevens assumed his duties, which included acting as Superintendent of Indian Affairs, later that year in November.

By 1855, new white settlers had an insatiable demand for land and resources, and Stevens began to heavily pressure the Yakama and other tribes to sign treaties. On June 9, 1855, the Yakama, Umatilla, Cayuse, and Walla Walla tribes signed the treaties, which ceded more than six million acres to the United States government in exchange for $200,000. Initially, Yakama Chief Kamiakin refused to sign the treaty but, later did so under duress. However, the Yakama tribe, who ceded 10,828,800 acres to the U.S. government, reserved their right to fish, hunt, and gather within the ceded area.

Walla Walla Chief Peopeomoxmox won a separate reservation for the Walla Walla, Cayuse, and Umatilla. Initially, the documents also ordered the Nez Perce to move to Oregon’s Umatilla Reservation with the Walla Walla, Cayuse, and Umatilla tribes. However, all the tribes so opposed this plan that Territorial Governor Isaac Stevens granted the Nez Perce the right to remain in their territory, on the condition that they relinquish nearly 13 million acres to the U.S. government.

The tribes and bands also agreed to move to the new reservations and receive federal benefits. However, at the time the treaty was signed, Governor Stevens assured the Indians that white miners and settlers would not be allowed to trespass on tribal lands during the time before the United States Senate could ratify the treaty and, the treaties stipulated the tribes and bands had two years to relocate to their new reservations.

However, like so many other treaties enacted in the American West, Governor Stevens didn’t keep his word and threw open the Indian lands for white settlers less than two weeks after the treaty was signed. The Oregon Weekly Times, just 12 days after the Walla Walla treaties were signed, ran an inexcusable article that read, in part:

“By an express provision of the treaty, the country embraced in these cessions and not included in the reservation is open to settlement, excepting that the Indians are secured in possession of their buildings and implements till removal to the reservation.”

Yakama Chief Kamiakin then called upon the tribes to oppose the declaration. Some of the tribes joined forces under Kamiakin, and other tribes rose as well, resulting in the Yakima War.

The three treaties signed by Washington tribes, resulting in the Yakama, Nez Perce, and Umatilla reservations, were not ratified by Congress until 1859.