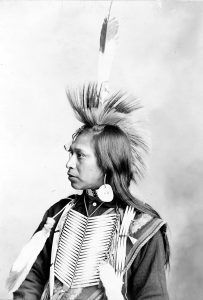 In late 1855, a conflict between the Indians east of the Cascade Mountains and American soldiers and settlers spilled over the mountain passes, igniting what has come to be known as the Puget Sound Indian War. Ignoring tribal tensions, settlers continued to move into the area. Disturbed by the continuing disregard for their lands, the White River Indians including the Muckleshoot and Klickitat tribes, attacked several settlers in the area on October 28, 1855. At about 8:00 a.m. the Indians began an attack, killing three families — nine people, in all.

Harvey H. Jones and his wife were killed, but their three children were spared. According to historical accounts, after the two were killed, the house was burned to the ground. Harvey Jones, who was sick at the time, was found burned in his bed. His wife was found lying near the house, shot through the lower part of the lungs and her face and jaw horribly broken, mutilated apparently, with the head of an ax. The three children included Mrs. Jones 7-year-old son from a previous marriage, named Johnnie King, who would later tell that an Indian named Nelson snapped his gun at them three times; but, when it wouldn’t go off, told them to go and they were later saved. Enos Cooper, who was working for the Jones family, was also killed. His body was found about 150 years from the house, killed by a shot through the chest. Neighbors buried the three bodies near their burned down home.

A third family – that of George E. King, his wife, and two children were also attacked and the parents killed. Mrs. King’s body was found cut open with one breast cut off, and Mr. King was found burned up in the home. Their two children, including a baby, were kidnapped. The son, named George King, Jr. was brought to Seattle the following spring; having been well cared for by an Indian called “Spoon Bill.” However, the baby was never recovered.

Another man, whose name remains unknown, was also killed the same day. An attack was also made on the home of a Mr. Cox. There, a man named Joseph Lake was wounded, but not seriously. Cox, with his wife and Lake, escaped, alarming the family of Moses Kirkland, who also escaped. Raids and skirmished would continue for the next six months until the Cascades Massacre in March 1856. In the meantime, these months would become known as the period of the blockhouses, as these log forts sprang up across the landscape of the southern Puget Sound.