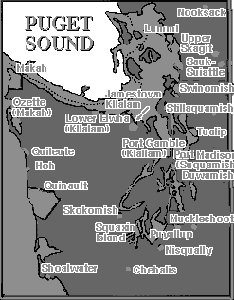 This armed conflict, taking place in the Puget Sound area from October 1855 to March 1856 primarily occurred between the United States Military and local militias against members of the Nisqually, Muckleshoot, Puyallup, and Klickitat tribes over land rights. At the same time, the Haida and Tlingit tribes were also coming into conflict with the United States Navy.

The affair began after the Treaty of Medicine Creek was negotiated in 1854, which set aside reservations for the tribes. However, for the Nisqually tribe, their reservation was situated on rocky high ground which was unsuitable for farming and cut them off from access to the river that provided the mainstay of their livelihood, salmon. In 1855, Nisqually Chief Leschi traveled to the territorial capital at Olympia to protest the terms of the treaty; but he was unsuccessful. Lieutenant James McAllister convinced Acting Governor Charles Mason that Leschi was stirring up trouble with the other Indians. Mason responded by dispatching McAllister’s militia unit, Eaton’s Rangers, headed by Captain Charles Eaton, to take Chief Leschi his brother Quiemuth into “protective custody” and deliver him to Olympia.

In October 1855, Captain Charles Eaton and his citizen militia — “Eaton’s Rangers,” caught up with the Nisqually, and a fight ensued in which two militiamen, Joseph Miller and Abram Benton Moses, were killed. Upon hearing the news, Governor Stevens immediately dispatched more troops to find Chief Leschi and bring him in. However, before the militia arrived Chief Leschi received word that they were coming after him and he and his brother, Quiemuth fled. 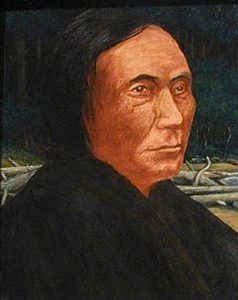 However, when the militiamen were encountered by the Nisqually, a fight erupted and two soldiers named Abram Benton Moses and Joseph Miles (or Miller) were killed. Though Leschi was not even there, infuriated territorial authorities blamed him for the killings and the search for Leschi would gain momentum. The chief would remain at large for nearly a year. In the meantime, Stevens declared martial law over Pierce County on April 2, 1856. (He was later charged with contempt of court due to this declaration; however, as governor he pardoned himself.)

The war itself consisted of a series of short skirmishes with relatively few deaths on either side. Notable battles occurred in present-day Tacoma, Seattle, and even as far east as Walla Walla. Although limited in its magnitude, territorial impact and losses in terms of lives, the conflict is often remembered in connection to the Battle of Seattle, which occurred in January 1856, and to the execution of a central figure of the war, Nisqually Chief Leschi on February 19, 1858. The contemporaneous Yakima War may have been responsible for some events of the Puget Sound War and it has never been clear that the people of the time made a strong distinction between the two conflicts.

On December 10, 2004 a historical court convened in Pierce County, Washington ruled “as a legal combatant of the Indian War… Leschi should not have been held accountable under law for the death of an enemy soldier,” thereby exonerating him of any wrongdoing.