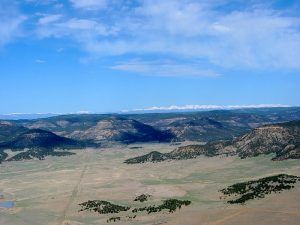 Located just west of the city of Raton, New Mexico is the 590,823-acre private Vermejo Park Ranch, upon which, sit the remains of five coal mining camps that are integrally related to the early settlement and history of Raton and Colfax County. 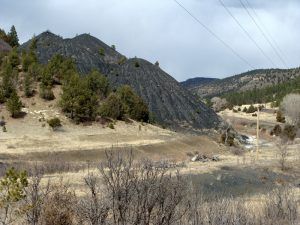 These once flourishing towns include Blossburg, Brilliant, Swastika, and Gardiner in Dillon Canyon and Koehler, farther to the southwest.

The Vermejo Park Ranch is now owned by American media mogul, Ted Turner, who also owns a number of other ranches throughout the nation, making him one of the biggest private landowners in the United States. The Vermejo Park Ranch lies mostly in western Colfax County, New Mexico, but smaller portions extend into northeastern Taos County, New Mexico as well as southwestern Las Animas County and southeastern Costilla County in Colorado. At 923 square miles, it is the largest privately owned, contiguous tract of land in the United States.

This area was once part of the Maxwell Land Grant, the largest land grant in the United States. Lucien B. Maxwell, who owned the grant sold it to the Maxwell Land Grant and Railway Company for $1,350,000 in 1870. During Maxwell’s ownership, a number of squatters and miners had settled on the lands, from which the new company was determined to evict. However, land titles were unclear and many residents had lived on the land for years, which led to the Colfax County War. 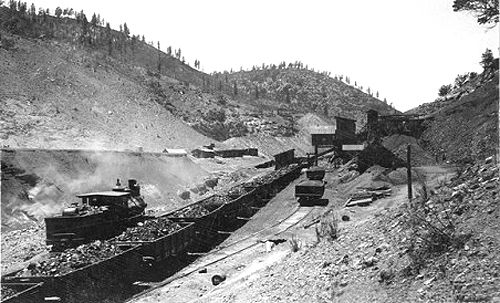 In February 1881 the Raton Coal & Coke Company was formed by officials of the Maxwell Land Grant Company and the Santa Fe Railway, with each having one-half interest. The company opened its first coal mine at Blossburg the same year.

In 1905, the Raton Coal & Coke Company was sold to the St. Louis, Rocky Mountain & Pacific Company, which also received title to 212,000 acres of land on the Grant. It also acquired coal rights to an additional 350,000 additional acres. The company became a major force in the coal development of Colfax County until 1955 when it discontinued business.

“The sale of the immense coal fields of the Maxwell Land Grant Co. to railroad interests . . . is one of the most important business deals ever carried out in New Mexico.” – The Raton Weekly Range, July 13, 1905 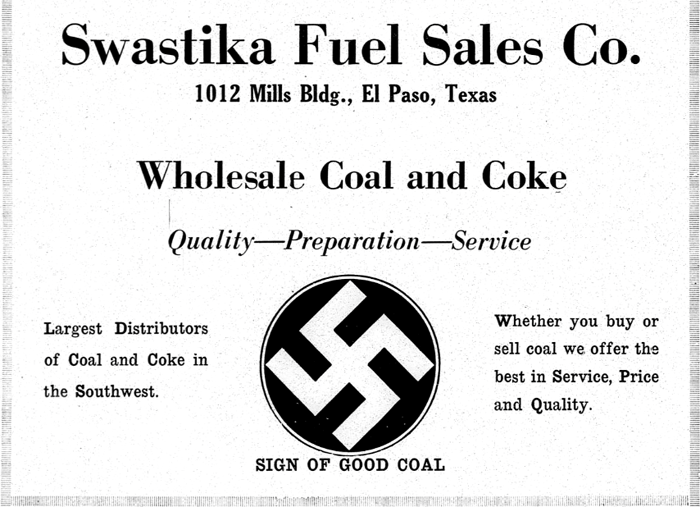 Almost immediately after incorporating, the St. Louis, Rocky Mountain & Pacific Company bought or formed several subsidiary companies. One was the Swastika Fuel Company in Raton, whose purpose was to mine coal and other minerals as well as acquire mine lands and conduct mercantile business.

Because the St.Louis, Rocky Mountain, and Pacific Company took over mining operations at all of the existing mines in 1905, the construction of houses and mine structures used at all of the camps was Dwellings for miners were almost all four-room units with half-cellars and porches, with a few larger houses for the mine bosses. Houses were usually in rows with about 50 feet separating one house from the next. Except for Koehler, all houses have generally been reduced to only foundations because most of the structures were sold by the St. Louis, Rocky Mountain, and Pacific Company to residents and businesses of Raton when the mines closed. 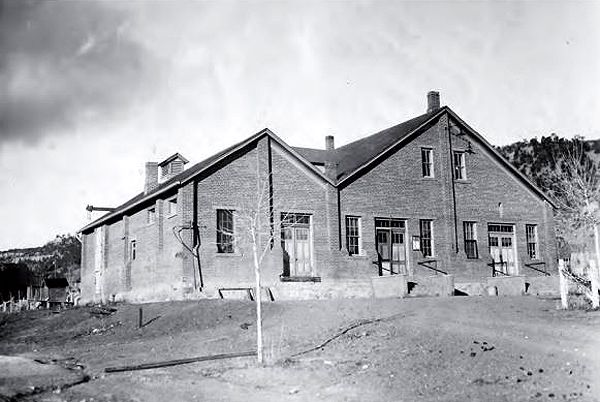 All of the camps developed into actual towns, with most communities having a branch of the Blossburg Mercantile Store, saloons, a schoolhouse, and sometimes churches. Where churches didn’t exist, services were held in the school buildings. Schools in all of the camps only went to the eighth grade. Some camps had barbershops and pool halls. Each town also had baseball fields, and there was a fierce rivalry between the camps. Most camps had resident doctors and the community of Gardiner had a hospital, which served all of the camps. With Prohibition in 1918, company saloons were closed and turned into clubhouses or amusement halls, which held movies twice a week, sponsored dances, and sometimes had refreshment rooms and libraries. In 1914 George Honeyfield provided mail, freight, and passenger service from Raton to Dillon Canyon for the camps located there. 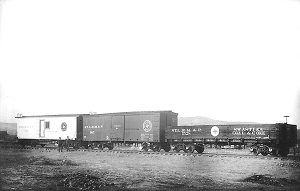 Besides developing the coalfields, the St. Louis, Rocky Mountain & Pacific Company planned to build 120 miles of standard gauge railway from Des Moines, New Mexico, west to the Moreno Valley, to connect with the Atchison, Topeka & Santa Fe Railway, the Colorado Southern, and the El Paso and Northeastern Railroads. The swastika symbol, which represented good luck, was painted on all the rail cars. They also planned to serve some large timber areas and several gold mines. The company had 189,480 acres of coal land and rights to another 314, 300 acres, the largest amount of coal land under single ownership in the United States. The area was estimated to contain 300,000,000 tons of high-quality coal. 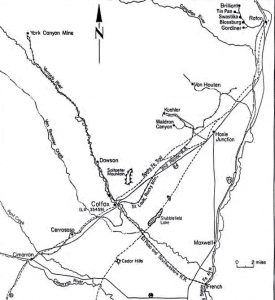 In 1906, the St. Louis, Rocky Mountain & Pacific Company took over the Raton Coal and Coke Company and its shares of the Blossburg Mercantile Company, which had been founded in 1895 to buy and sell goods, merchandise, and land. This resulted in a complete lack of competition for goods in all of the coal camps. The St. Louis, Rocky Mountain & Pacific Company acquired the company in 1907 with a capital stock of $500,000 and approval to conduct general banking at the stores. As the coal business declined, so did the mercantiles, and the company was dissolved on November 30, 1935.

With coal veins from 4.5-12 feet thick along the hillsides and canyons, Colfax County produced 74.8% of all coal mined in New Mexico Territory by 1909. The coal mines collectively employed 3,563 miners in 1911. The men were mostly immigrants from many different countries who had responded to company advertisements for workers, published as far away as Europe. Among these immigrants, Italians were the most prominent.

Miners paid rent and electricity for their houses, which were built by the company. The homes mostly consisted of four rooms, sometimes five, and a cellar with a charge of $3.50 per room per month. From their monthly paychecks, $2.50 was deducted for doctor and hospital services, $.50 for blacksmithing, $1.50 for a miner’s lamp, and $3.00 per ton of coal delivered to their homes. 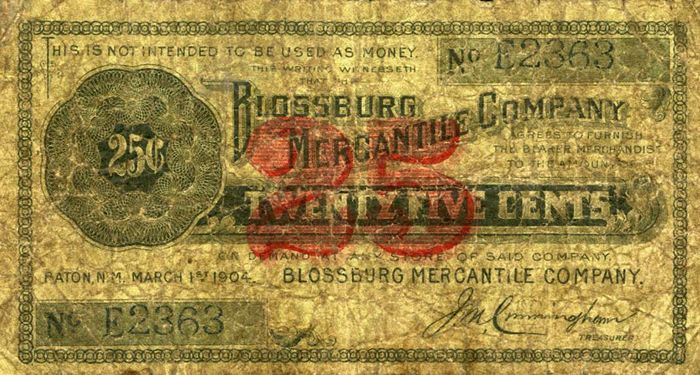 Miners were paid monthly when the paymaster would come from Raton with an average of $24,000 in cash, accompanied by three or four armed guards. There was no system of credit at the stores in the mining camps, which were all owned by the company. Instead, if a miner needed money between paychecks, he could go to the mine office and get his accumulated pay in scrip. He then could use the scrip at company stores and saloons. At the end of the month, the amount of scrip used was deducted from his pay.

On November 7, 1938, because of the events of World War I, the Swastika Fuel Company changed its name to the Raton Coal Company. The company operated until January 31, 1956, when its assets were turned over to the parent company, the St. Louis, Rocky Mountain & Pacific Company.

By 1953, the St. Louis, Rocky Mountain & Pacific Company owned 202,950 acres of land and 326,853 acres of coal rights. However, in 1952 it leased the land to the Continental Oil Company for two years because of lagging coal sales. In 1954 only a few shipments of coal were made to local communities for domestic use. 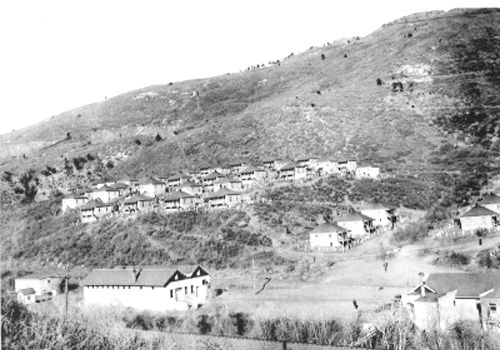 The company also owned the mining towns of Sugarite, with its few remains located in Sugarite Canyon State Park east of Raton, and Van Houten, now part of the NRA Whittington Center, located about 10 miles south of Raton. These two sites are not part of the Vermejo Park Ranch.

In 1955 the St. Louis, Rocky Mountain & Pacific Company went out of business and the Kaiser Steel Corporation bought their interests. Kaiser Steel and Coal filed for bankruptcy in February 1987 and was sold to the Pittsburgh and Midway Coal Mining Co. Ted Turner bought the property, now known as Vermejo Park Ranch, on February 1, 1989.

Today, these several abandoned mining camps of Blossburg, Brilliant, Swastika, and Gardiner in Dillon Canyon and Koehler stand protected behind the gates of the Vermejo Park Ranch. 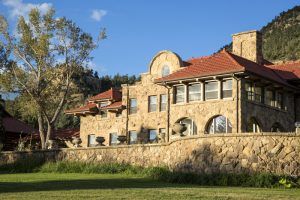 Vermejo Park began when William H. Bartlett of Chicago, Illinois bought 205,000 acres from the Maxwell Land Grant Company in 1902. After evicting a number of Mexican squatters living there, Bartlett hired Chicago architect Joseph Lyman Silsbee to help him make improvements including a power plant and three large residences, one of which was the Casa Grande, a 25,000-square-foot, Spanish-inspired stone estate. Casa Grande is fully renovated today and serves as guest accommodations on the Vermejo Park Ranch. Bartlett also reintroduced elk to the park, built and stocked several lakes with trout, and expanded the property to 300,000 acres

Over the years the ranch sold several times and each time it was expanded. In 1973, Pennzoil bought the property for $26.5 million and increased its area to 588,000 acres. The company ranched and expanded the facilities for guests. In 1996 Ted Turner purchased the property, sold the cattle, incorporated bison, and put an emphasis on managing wildlife.

Today the 590,823-acre (923 square miles) ranch, which stretches from the Great Plains to the summit of the Sangre de Cristo Mountains, is used primarily for conservation, hunting, fishing, and other recreation, but also produces significant quantities of coalbed methane, a type of natural gas. 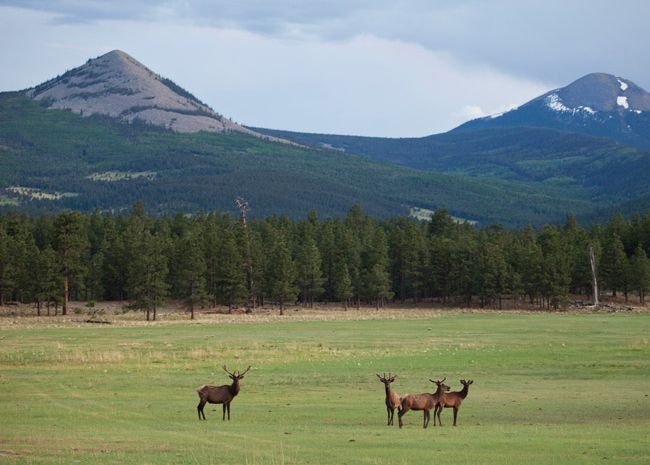 Game animals include 8,000 to 10,000 elk, 3,000 to 4,000 mule deer, pronghorn, 2,000 bison, black bear, mountain lions, bighorn sheep, and wild turkey. Visitors can explore the property, including the ruins and remains of coal mining settlements.

However, the “ticket” for entry is a stay at one of the ranch’s lodging facilities. Rates start $850 per night at the lower end and are as high as $14,000 (2018 rates), depending on the accommodations, time of year, and the number of guests. 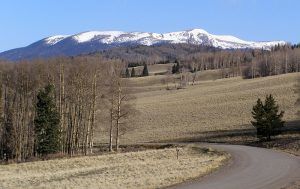 Big Costilla Peak is one of the two highest mountains on the Vermejo Park Ranch, photo courtesy Wikipedia