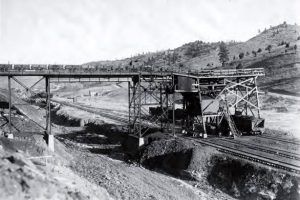 Mine Tipple at Swastika, New Mexico

Mining operations at Swastika were the last to get underway in Dillon Canyon on the vast Vermejo Park Ranch in northeast New Mexico. The mine and the town were named Swastika, the Navajo word/symbol for good luck.

The area was first prospected in 1917 by the St. Louis, Rocky Mountain & Pacific Company, which was looking for new coal sources. They built a boarding house and a few dwellings at this time and a tipple and rail yards. The New Dutchman Mine at Blossburg was probably redone and became part of the Swastika Mine No. 1. Another mine was established near the junction with Coal Canyon.

By 1918, the Swastika Mine produced 29,200 tons of coking coal per year and had the highest commercial value in the area. The Swastika post office was established in 1919, at which time the town supported 500 residents. 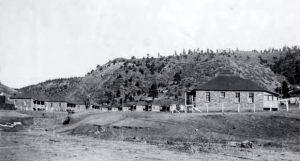 By 1925 the mine yielded 1,500 tons per day and became the principal coal-producing town in Dillon Canyon. At this time, the community boasted 102 houses, a schoolhouse, a company store, a saloon, and a doctor’s office. By 1929 Swastika had a population of 500.

In 1940, during World War II, the community’s name was changed from Swastika to Brilliant No. 2 because of the use of the swastika symbol by utilized by Nazi Germany. Though the swastika had long been a design common to cultures worldwide, Hitler’s rise in the Nazi Party changed the world’s perception of the ancient emblem of the swastika forever. 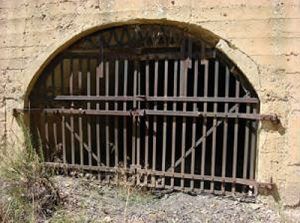 The post office’s name was changed to Brilliant, as the former town had been discontinued.

In 1944 a mine explosion killed six men in the Swastika mine. The mine closed on July 29, 1953, and the equipment and buildings were sold for scrap. Many of the houses were moved from their foundations, transported to Raton, and used as residences, some of which are still in use today. The post office was discontinued in 1954.

Today there is little left but foundations, low walls, the ruins of the powder house, an old mine building, and the entrance to the Swastika Mine. The Vermejo Park Ranch owns the property, and all access to the town is blocked off, except for ranch guests who pay a hefty price for a night’s lodging. 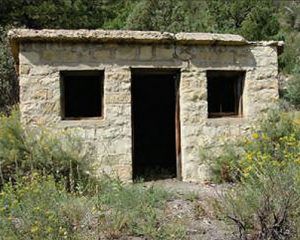 An old mine structure at Swastika, New Mexico