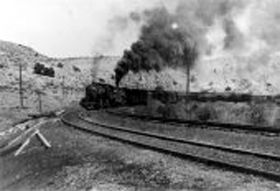 Colton, Utah was a railroad town and came into existence as a result of the coal mines in Pleasant Valley. The old ghost town sits almost on the line separating Carbon County from Utah County along US Highway 6 just south of SR 96.

The town existed for several years not as a town but as a siding. It was a railhead in 1882 as the railroad was finishing the line through Price Canyon. Soon after that was completed in 1883, a spur was built along Fish Creek up to Pleasant Valley (near Winter Quarters, another ghost town) so coal could more easily be hauled out of the high mountain valley. The old route, the Calico Road, over the mountains and down to Tucker, was abandoned.

Called Pleasant Valley Junction first, in 1898 the town’s name was changed to Colton after a railroad official, William F. Colton. By then the town had expanded from just a railroad town with roundhouse, turntable, depot and workers’ bunkhouses.

It now had two large hotels and a regular business district along the tracks. On the other side of the rails, a huge corral was constructed and many ranchers from the area used Colton as a place from which to ship their cattle to market. A large stone school was built for the residents’ children and nearby springs supplied more than enough clear, freshwater to the town.

Colton loaded coal from a large loading facility built there and then came the discovery of ozokerite in the fall of 1904.

A part-time gunfighter, erstwhile member of the Wild Bunch and Price city butcher turned mining entrepreneur found the waxy substance. C.L. “Gunplay” Maxwell and his lawyer, Mark P. Braffet, formed the Utah Ozokerite company and soon were mining the waxy substance from the largest known ozokerite mine in the world. 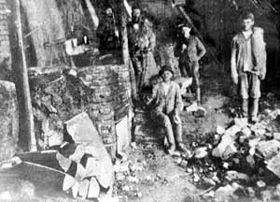 Inside an Ozokerite Mine

By the end of November that year, they were down more than 70 feet with several 150-foot long drifts away from the main shaft. They hired H.H. Miller to be the superintendent and Miller set up two shifts of miners.

By March 1905, the new mine had a mill and installed a 40-horsepower boiler to operate the hoists and pumps. It had gone public and thousands of shares had been grabbed up quickly at only 25 cents a share.

The Eastern Utah Advocate in Price reported the advancement of the mine on its March 9, 1905, front page and concluded the article with this:

“Ozokerite is a very rare mineral, never having been discovered in the United States outside of Utah [several deposits are found in the Mexican Bend area of the San Rafael River]. Its very extensive uses in this country have heretofore been supplied from Bohemian mines.” Ozokerite was used, among other things, to make the new phonograph records.”

“Gunplay” Maxwell was “in the catbird seat” as a mining officer, but could not leave well enough alone. He liked being an outlaw even more than money.

In 1896 he had robbed the bank in Springville but was captured the same day and sent to prison. His sentence was commuted for helping stop a prison break in 1903. In 1904-05 he found the ozokerite at Colton and some at Mexican Bend. 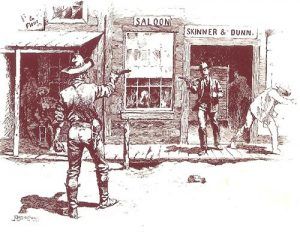 In September 1907, he was involved in a gunfight in a saloon in Helper and was wounded and arrested. He later was freed. In January 1908, he married a rich California widow, without the benefit of a divorce from his other wife in Vernal.

Then in June 1908, he and another man held up a Wells Fargo stage at Rawhide, Nevada, and were captured. He was released on bond and never brought to trial.

In March 1909, he shot up a saloon in Green River and was again arrested. He was again released.

In August 1909, he picked a gunfight with the wrong man, Deputy Sheriff Edward Johnstone, in the streets of Price. Johnstone shot him down and an autopsy showed him as a heroin addict. He was buried in Salt Lake City but a tombstone in the Price City cemetery gives the impression he is buried there.

By the end of World War II, Colton was nearing its end as a town. Buildings remained until the mid-1970s and even today part of the school remains. The old general store was moved up the hill from the town and sits along U.S. Highway 6 today.

Colton has produced many old, rare bottles over the years, and undoubtedly more will eventually be dug. It is just .8 of a mile south of the highway’s junction with SR 96, heading to Scofield. 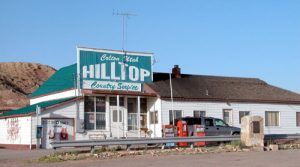 About the Author: Chuck Zehnder, who now works as the Dean of Campus Ministries at the College of the Ozarks in Point Lookout, Missouri, lived in Carbon County, Utah several years ago. In 1984 he published the book A Guide to Carbon County Coal Camps and Ghost Towns (now out of print.)