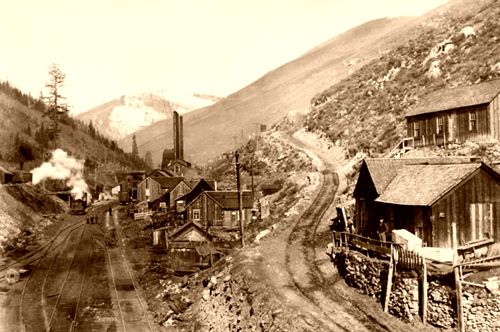 “There’s gold in them thar hills!” was a cry a few years ago regarding Winter Quarters, a Utah ghost town and mining camp. That cry came years after Winter Quarters was abandoned and for reasonable cause. First, a little history of the town.

George Matson first opened winter Quarters in the spring of 1875.

“When we arrived in Pleasant Valley, later the site of Winter Quarters, we started right in to survey Pleasant Valley township and later we did assessment work on the claims.

Phil Beard, John Nelson, and I started No. 1 tunnel and drove the first hundred feet into the hillside. Later, thousands of tons of coal were hauled out of this entry. I helped dig from the five-foot vein, the first load of coal ever shipped out of the valley,” so said Matson in an Aug. 23, 1928 issue of The Sun newspaper, published at Price.” 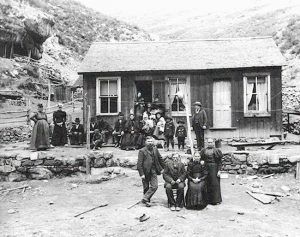 In extreme northwestern Carbon County, the high mountain ghost town became known as Winter Quarters because John Nelson and Abram Taylor wintered there in 1875 to hold the claim they had filed.

Two years later, a group of men from Sanpete County came over the mountain to begin the town and continually work the mine. They intended to leave before winter, but an early snowstorm trapped the men. When their supplies ran out in February 1878, they then walked out to the north, eventually reaching the town of Tucker (now a ghost town and rest stop) in Spanish Fork Canyon.

When the great tonnage of coal in the mountain was known, more people began moving into the burgeoning town. As more and more coal was mined, the need for a railroad became apparent. Some of the residents got together and bought out a dry goods firm in the east and paid railroad workers with clothing and fabrics.

That old railroad bed is now a dirt road leading from the Tucker rest area on US-6 up the mountain onto what is known today as Skyline Drive and then down into Pleasant Valley. The railroad became known as the Calico Line. 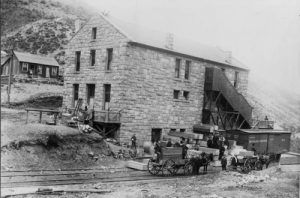 After the mining disaster caskets brought in from Salt Lake City and Denver were unloaded at the Wasatch Store in Winter Quarters, Utah.

May Day, 1900, started with a clear sun shining up the valley into the town as 303 miners headed up to the mine portal. This mine was considered one of the safest in the country and had been inspected by Gomer Thomas, state mine inspector, on March 8.

But at 10:15 a.m., everyone in the mountain town felt the ground shake. Some people thought someone had fired off an explosion to celebrate Dewey Day. Soon, the horrible truth spread through the town like wildfire. A giant explosion had occurred in the mine.

Mothers and daughters were seen hurrying toward the mine portal, “faces blanched with fear, hoping against hope that their loved ones in some way had escaped. Soon the realization came that the miners were caught – caught like rats in a trap with no chance of escape,” reported Charles Madsen in his account of the disaster.

When rescue and recovery teams were finally able to enter the horizontal shafts, they found “men piled in heaps, burned beyond recognition. The bodies were removed as fast as possible, and the school, the church, and other available buildings were requisitioned as morgues.

When the accounting was done, 104 had escaped, seven of them seriously injured, and 199 killed in the mine blast. The town was 28 years from being a total ghost town. 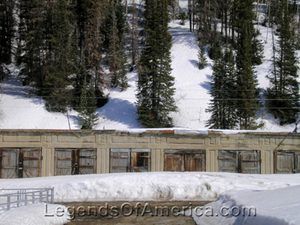 Building near Winter Quarters, Utah amid the Spring Snow.

When Pleasant Valley Coal Company opened mines at Castle Gate, far below Pleasant Valley, it spelled the end of the long-haul operations at Winter Quarters. Production decreased steadily, and in 1928 the mine was closed, and the town abandoned.

The buildings stood mute in that mountain valley for many years: windows boarded shut, roof shingles slowly slipping, and walls rotting into dust. The school no longer heard the sounds of children laughing, and there was no need for a janitor to clean the spring-time mud from the floors.

Eventually, the buildings collapsed or were torn down by scavengers, and today only grass-covered foundations remain of what was Utah’s first coal camp. There are no industrial sounds in the quiet valley today, only a bubbling stream and the clicking of mule deer hooves on the rocks. But is that all that remains?

Speculation over the years about buried gold has frequently come into conversations about the mining town. 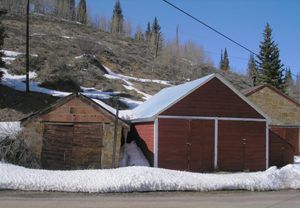 There is no question about the miners being paid in gold and silver coins. Just three years earlier, Butch Cassidy and Elza Lay had robbed the Pleasant Valley payroll when the money arrived by train. Their loot was $7,000 in gold double eagles. They dropped $700 in silver.

Couple that payroll with the fact that there was no bank at Winter Quarters, and it is easy to see how many believe some of those miners had cached gold coins among the rocks or under fence posts behind their homes on the valley side. If they had not told wives of the cache, knowledge of it died with the miners that May Day in 1900.

Some have looked over the years for lost gold in the old townsite. None has ever reported finding some.

Can it be that the ghosts of those miners stand watch over buried gold double eagles?

About the Author: Chuck Zehnder, who now works as the Dean of Campus Ministries at the College of the Ozarks in Point Lookout, Missouri, lived in Carbon County, Utah, several years ago. In 1984 he published the book A Guide to Carbon County Coal Camps and Ghost Towns (now out of print.)