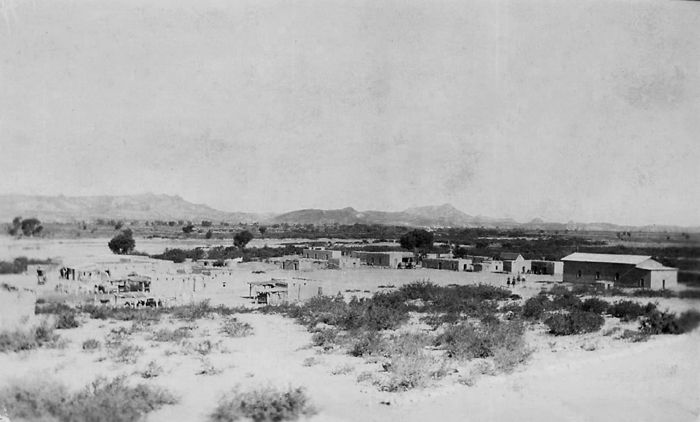 Redford, Texas is a farming community and near ghost town in Presidio County in an area that has been inhabited for centuries. The settlement of Redford was officially established in about 1876.

Located in a district that the Spanish called La Junta de los Ríos, this region had been inhabited since the Paleo-Indian Period from 8,000 to 6,500 B.C. These hunter-gathers survived on small game and edible plants in the region. By 1500 B.C., the area was known to have been inhabited by corn farmers of the Cochise culture and by 700 A.D. many of the region’s Indians had begun to adopt more sedentary lifestyles. Influenced by pre-Puebloan cultures like the Mogollon and the Anasazi, the people of La Junta eventually began to use pottery, live in jacal dwellings, and form extensive trade networks. The area was perfect for settlement due to its abundant water, fertile farmland, and bountiful game, and was located on an ancient and heavily traveled north-south trade route.

By the time the Spanish first came to the region in 1535, it was inhabited by the Patarabueye and Jumano people. At that time, Spanish explorer Cabeza de Vaca and three companions, who had survived the failed Panfilo de Narvaez expedition, traveled through the region. The first non-Indians to see the area, they discovered a number of villages that varied in size, from small clusters of a few families to one that was called home to over 1,000 residents and displayed a complex political structure. These people lived in single-story, flat-roofed pit houses of adobe construction and raised large crops of corn, beans, squash, pumpkins, and melons.

Some four decades later, a number of expeditions passed through La Junta, providing written accounts of the native peoples living in scattered villages along the two rivers. These descriptions set the stage for a greater Spanish presence in the area, bringing with them livestock and agricultural knowledge. La Junta soon became a cultural crossroads where farmers and hunters, nomads and villagers, came and went.

Before long, the Spanish began to build missions in the area with the clergy working to convert the Indians to Christianity, including one near the site where Redford would be established much later. Just above the Rio Grande, at its confluence with a small intermittent stream, Arroyo de la Iglesia (Church Creek), once stood a village called Tapacolmes. Sitting upon a large terrace, an early Spanish Mission was built sometime around the turn of the 17th Century. Called the San Pedro de Alcántara de los Tapalcomes, the mission didn’t serve these peoples long, as the Tapacolmes were thought to have left the pueblo by 1725 due to Apache raids. 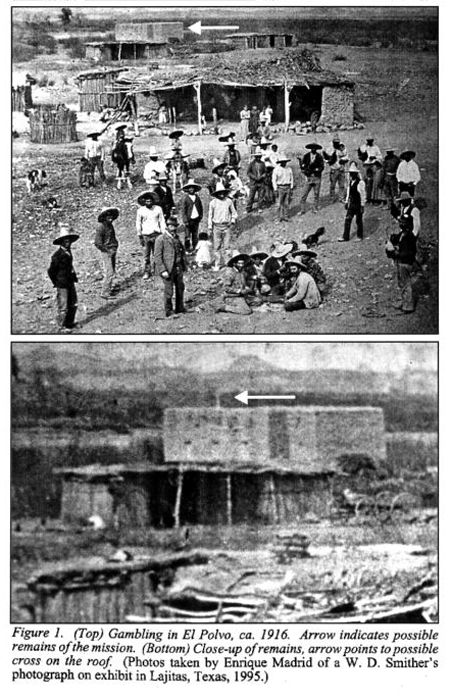 Exhibition of Mexicans gambling in old El Polvo in about 1916. In the photo’s background was an almost-two-story-high mission building still intact and with a cross above its front entrance. Photo courtesy Texas Beyond History.

In 1747, the site was visited by Captain Joseph de Ydoiaga on an expedition to La Junta de Los Rios in 1747, who recorded that the pueblo had been abandoned and that the thick walls of the church were in ruins.

Except for small rancherias, Tapacolmes wasn’t settled again until 1870 when Texas Governor Richard Cocke initiated a policy to encourage people to cross the border from Mexico to settle in Presidio County. New settlers were allocated 160 acres of land and American citizenship. Its colonists fought the last of the Apache raids, cleared the floodplains, established farms, and brought in goats and cattle. They also banded together in building homes, dams, and hand digging canals for irrigation, many of which are still in use today. Many of the dams also still hold water for irrigation farming on both sides of the Rio Grande in the Redford Valley.

In 1871, the colonists officially founded their village calling it El Polvo, meaning “the dust” in Spanish. But, for generations, the Indians and Mexicans called it Vado Rojo, or the “red crossing” based on the color of the stone bedrock that lay beneath the Rio Grande, and lined the hills on either side of the valley. The village was laid out with a central square surrounded by connected adobe houses with doorways opening to the inside of the square. This arrangement; however, was apparently abandoned sometime around 1900, when the community had become more dispersed.

It is believed that the new settlers of El Polvo took over the ruins of the old mission and repaired them in order to use for church services. It was described as a large adobe building that consisted of the main chapel and a smaller room — probably a sacristy. The long building had a large double door entrance to the main chapel and inside, there were two large adobe altars. However, by the early 1900s, the building was in such disrepair that it was abandoned and soon a new church was built.

In May 1885, when Geronimo and other Apache leaders began raiding small settlements throughout southern New Mexico and into Texas, General George Crook ordered troops to be stationed at every major crossing point along the Rio Grande border. Consequently, in June, Lieutenant George K. Hunter, commanding troops at Camp Pena Colorada and Lieutenant H.F. Kendall, commanding the Black Seminole scouts at Nevill’s Springs, received orders to guard the region between the Presidio del Norte and Presidio de San Vicente. After establishing Camp Polvo just east of the town of El Polvo, the Black Seminole scouts searched the surrounding region for any signs of hostile Apache. 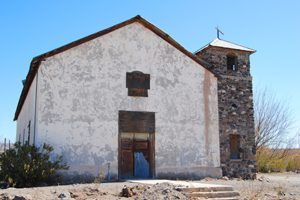 The 1890s brought several changes to the area. A severe drought during the first portion of this decade greatly affected the ranchers of the region, and at the same time, mining was becoming an important industry in Shafter to the northwest, and Terlingua to the east. At that point, many of the people who had worked on the farms and ranches were employed in the mines.

At about the same time, the US Army began to consolidate its frontier garrisons. In 1891, Fort Davis and Camp Neville (in present-day Big Bend National Park) were closed and the Black Seminole Scouts were relocated to Camp Polvo, along the banks of the Rio Grande.

Fortunately, the drought was broken in 1895, and ranchers again stocked the range with cattle, sheep, and goats. 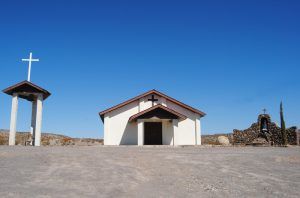 By 1900, the old mission was in such a bad state of disrepair that it was abandoned and replaced with the new Church of San Jose del Polvo in 1914. The church is distinguished by its offset stone bell tower with a low hip roof. It too, was replaced by the new San Jose Catholic Church, built in 1970. The old church, privately owned today, continues to stand.

During the Mexican Revolution, 1910-1920, the region was in chaos as the unrest that enveloped Mexico spilled across the river. During this period U.S. military operations were greatly increased along the border. During the 1914 Pershing Expedition in search of Pancho Villa, nearby Presidio served as an emergency landing field for the first U.S. planes to engage in foreign combat. In addition, U.S. Cavalry troops were stationed along the Rio Grande at Ruidoso, 35 miles above Presidio, Camp Fulton at Presidio, and at Camp Polvo in Redford. Camp Polvo, which had been closed some years earlier, was reactivated between 1916 and 1920. 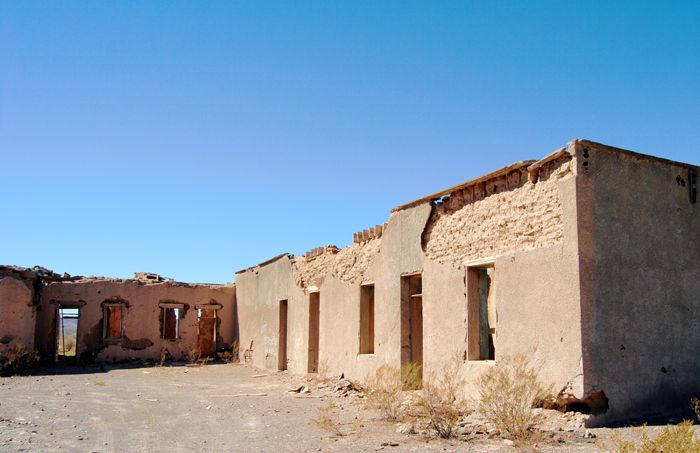 An old building in Redford, Texas by Kathy Weiser-Alexander, 2011.

In the meantime, the community received a post office in 1911 that was located about a half-mile above the El Polvo river crossing. When the request for a post office was made, the postal authorities insisted on an English name and the villagers complied with the literal translation of the Spanish name, Red Ford. The authorities didn’t ask if it was to be two words.

By 1914, the town had four general stores, but would never grow very large. In 1934, it was called home to some 60 residents and three businesses.

Unfortunately, in about 1956, the last crumbling walls of the old San Pedro de Alcántara de los Tapalcomes Mission were leveled by county officials at the landowner’s request. At that time, many manos and metates, tools utilized to grind seeds, nuts, and other plant foods; were recovered from the site. 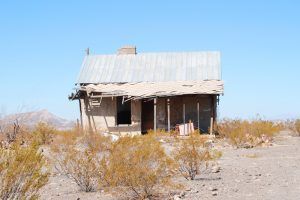 An old house in Redford, Texas by Kathy Weiser-Alexander.

In 1979, Lucia Rede Madrid, a descendant of the original settlers and a retired schoolteacher, opened up a school library in her family’s store. The store closed around 1990 but continues to serve as a library and museum.

Today, Redford is one of the oldest communities in the United States. The predominantly Mexican-American town is linked to the Mexican town of Mulato, Mexico just across the river. More than 90 percent if its residents can claim Native American ancestry. Parts of the old settlement of El Polvo has been designated as a State Archeological Landmark.

Redford is located about 16 miles southeast of Presidio, Texas along Farm Road 170, which follows the Rio Grande through both Big Bend Ranch State Park and Big Bend National Park. 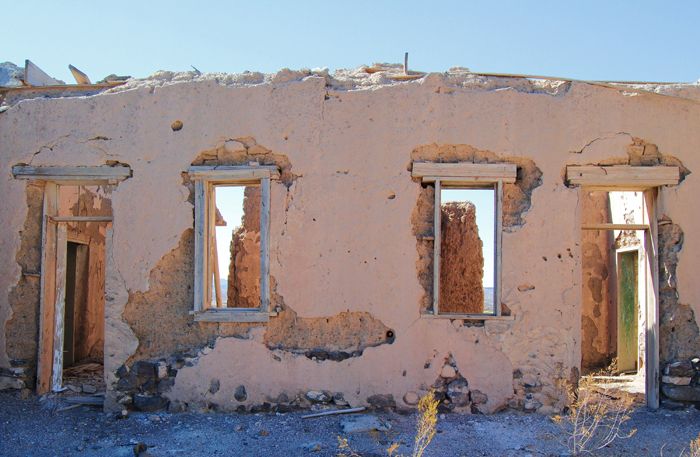