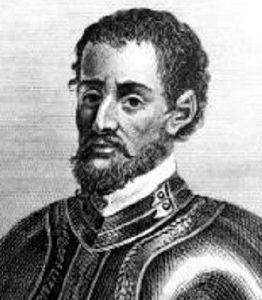 Panfilo de Narvaez was a Spanish explorer and soldier who helped conquer Cuba in 1511 and led a Spanish royal expedition to North America in 1527. After surviving a hurricane near Cuba, his expedition landed on the west coast of Florida, near Tampa Bay, in April 1528, claiming the land for Spain. He died there the same year.

Narvaez was born in Valladolid, Spain, in about 1478. He took part in the Spanish conquest of Jamaica in 1509, and two years later, in 1511, he participated in the conquest of Cuba under Diego Velazquez de Cuellar, with whom he was related. He led expeditions to the eastern end of the island in the company. He presided over the infamous massacre of Caonao, where Spanish troopers put to the sword a village full of Indians who had come to meet them with offerings of food.

In 1519, Hernan Cortes led an expedition to Mexico that would eventually overthrow the Aztec Empire. In 1520, Diego Velazquez de Cuellar, the governor of Cuba, who did not wish to see Cortes succeed, sent Narvaez after him at the head of a large expedition of ships and Spanish troops, with instructions to bring Cortes back, dead or alive. Narvaez disembarked at Veracruz, where Cortes had left behind a small garrison upon setting out with the rest of his men for the Aztec capital of Tenochtitlan. When the news of Narvaez’s arrival reached Cortés, the latter gathered his troops and returned to the coast, where he defeated Narvaez and took him prisoner. Narvaez remained a prisoner at Veracruz for approximately two years. In the meantime, the deadly disease of smallpox spread from a carrier in the Narvaez party to the native population of New Spain, killing many. 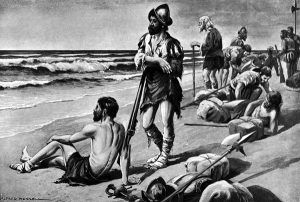 Later, in 1526, Narvaez was granted the land of Florida by Emperor Charles V. He led an expedition there with some 250-300 men in 1528. After surviving a hurricane near Cuba, his expedition landed on the west coast of Florida, near Tampa Bay, in April 1528, claiming the land for Spain. A series of hurricanes and fights with the local Indians killed many of the crew, and the ship’s captain sailed to Mexico without many of his men.

The stranded men soon built five crude barges on which they sailed west, hoping to reach a Spanish settlement in Mexico. Along the way, three of the vessels sank. One of these was captained by Narváez, who was never seen again. The two surviving rafts, carrying about 80 men, landed at Galveston Island, Texas. After a very cold winter with very little food, only 15 men survived. In the spring, the men traveled west by land, walking along the Colorado River and through the deserts of modern New Mexico, and Texas, before finally reaching civilization in 1536. By this time, there were only four men who had survived.