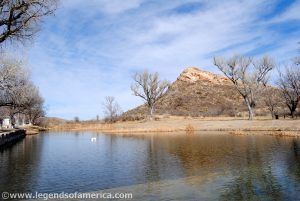 Cantonment Pena Colorada, Texas was built on Peña Colorada Creek near a large spring and beneath a high bluff called Peña Colorada (Spanish for “red rock”). The post was established in 1879 as a means of preventing Indian raids into Mexico. The creek, spring, and the army post were named for the high bluffs, which were also called Rainbow Cliffs. The year-round spring long provided fresh water to the Comanche and other nomadic native peoples, serving as a stop on the Comanche Trail.

Under Colonel Benjamin Grierson, Commander of the District of the Pecos, headquartered at Fort Concho, troops attached to the 10th Cavalry and the 25th Infantry arrived at Rainbow cliffs (Pena Colorado) in August 1879.

In 1860 the United States Secretary of War under President James Buchanan directed Lieutenant Colonel Robert E. Lee, commanding officer of the Department of Texas, to plan a military road connecting Fort Clark to Fort Davis. The implementation of these plans was delayed by 19 years. 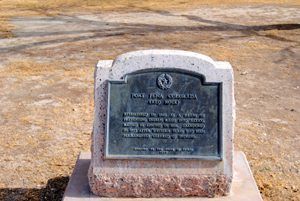 The mission was to protect and improve regional military communication, control the strategic water supply, and support the development of the Southern Pacific Railway. The location was not fortified; its official military designation was Cantonment Pena Colorada. The abundant spring had been a major landmark on the Comanche Trail, where annual raiding parties watered their war ponies before riding south the plunder isolated villages in Northern Mexico.

During campaigns against Apache leaders Victorio in 1880, and Geronimo in 1885, troopers from Camp Pena Colorado patrolled the remote crossings of the Rio Grande to discourage raids. By 1886, the camp featured a parade ground and six buildings built from native stone and adobe plastered with mud, with dirt roofs. These structures included two barracks, tow officer quarters, a storehouse and a granary. Grass was hauled in, and Irish-born troopers, thatchers by tradition, made shade over the stacked rock horse corrals.

Completion of the railroad, in February 1883, brought the material superiority of a rapidly expanding United States, and soon the military necessity of Camp Pena ceased to exist. The post was officially abandoned on February 11, 1893. Today, the land where the post was established has become the “Marathon Post Park”. There are no remaining buildings from the fort. It is located about 5.5 miles southwest of Marathon, Texas. Take Avenue D south out of Marathon for about five miles, then turn right onto Post Ranch Road for about 0.5 miles.

The famous “Buffalo Soldiers, including “Seminole Negro Indian Scouts” of the 10th Cavalry were among the elite Indian fighting units assigned here during the 14-year existence of the Post. Other units of the military were rotated through the camp. Famous Buffalo Soldier Lieutenant Henry O. Flipper served here before the post closed in 1893.