Big Bend National Park in southwest Texas is one of the largest and least visited of America’s national parks. Here, visitors can explore over 801,000 acres, ranging from an elevation of less than 2,000 feet along the Rio Grande to nearly 8,000 feet in the Chisos Mountains. Big Bend includes massive canyons, vast desert expanses, and the entire Chisos Mountain range. At Big Bend National Park, visitors can delve into one of the last remaining wild corners of the United States and experience unmatched sights, sounds, and solitude. 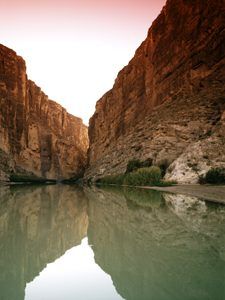 Bluffs Above the Rio Grande in Big Bend National Park in Texas by Carol Highsmith.

For more than 1,000 miles, the Rio Grande/Río Bravo River forms the international boundary between Mexico and the United States; of which Big Bend National Park administers approximately one-quarter of that boundary.

Within the 118 twisting miles that also define the park’s southern boundary, the river’s southeasterly flows change abruptly to the northeast and form the “big bend” of the Rio Grande.

Flowing through the Chihuahuan Desert, the river has carved beautiful canyons with nearly verticals walls, including the Santa Elena, Mariscal, and Boquillas Canyons. Throughout the open desert areas, numerous plant and animal species can be found.

Few areas exceed the park’s value for the protection and study of fossil resources. Over the years, archeologists have discovered artifacts estimated to be 9,000 years old, and historic buildings and landscapes offer graphic illustrations of life along the international border at the turn of the century.

Before 1535 A.D., two Indian groups have been identified as having inhabited the Big Bend area, including the Chisos and the Jumano tribes. The Chisos Indians were thought to be a loosely organized tribe of nomadic hunters and gatherers who probably practiced limited agriculture on a seasonal basis. The Jumano were also nomadic, and some evidence suggests that they were enemies of the Chisos.

In the 16th and 17th centuries, Spanish explorers began to roam the area searching for gold, silver, fertile lands, and Indian slaves. The first such expedition was that of Álvar Núñez Cabeza de Vaca in 1535 A.D.

Around the beginning of the 18th century, the Mescalero Apache invaded the Big Bend region and displacing the Chisos Indians.

To stop Indians from invading Mexico, several “presidios,” or forts, were established along the Rio Grande in the late 1700s. However, when the forts failed in stopping Indian intrusions, they were abandoned though many Mexicans continued to occupy the Big Bend area.

In the 19th century, the Comanche Indians crossed the Rio Grande numerous times while traveling to and from Mexico with their raiding parties.

Following the Mexican-American War, which ended in 1849, several military surveys were made of the uncharted land of the Big Bend.

Before long, military forts and outposts cropped up to protect the migrating settlers from the Indians. Around 1870, ranchers, bringing sheep, goats, and cattle established large ranches across the landscape. However, by 1900, the delicate desert environment had been overgrazed, and the ranchers moved elsewhere. 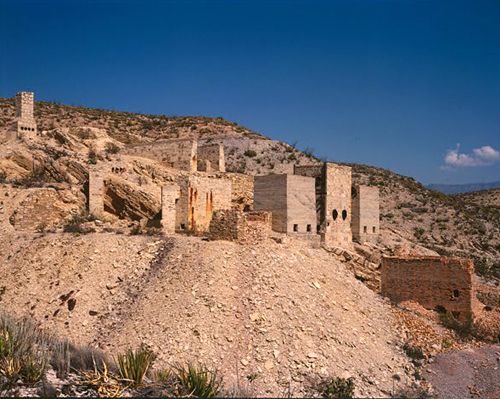 But, as ranchers were leaving the area, Mexican settlers began farming on both banks of the river’s floodplain, later followed by white settlers. Cotton and food crops were grown around Castolon, now known as Rio Grande Village. Another brisk business would also begin when Martin Solis discovered the bright red mercury-bearing ore called cinnabar near his farm in 1900. The discovery of cinnabar, which contains mercury, also called quicksilver, soon set the history of the Mariscal Mine in motion.

Shortly after Solis discovered the ore, a local U.S. Customs agent and Boquillas, Texas, store owner Ed Lindsay filed the first mining claim on Mariscal Mountain. When news got out, other prospectors began to comb the area, and several new communities would crop up, including Terlingua, San Vicente, and Coyote. The Lindsay Mine would produce from 1900 to 1905 but encountered numerous difficulties, the biggest of which was transportation. Moving the ore by mule to the nearest smelter was tedious and unprofitable. Lindsay sold his interests to Isaac Sanger of Dallas in November 1905, and the Texas Almaden Mining Company then operated the Mariscal Mine for the next four years until it closed due to a worldwide economic depression. 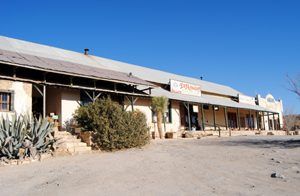 World War I created a demand for mercury, and a mid-western inventor named W.K. Ellis purchased the mine in 1917. With upgraded technology, the mine was again profitable, but prices plummeted at the end of the war, and Ellis sold the mine to a man named William “Billy” Burcham. New furnaces were installed, and the mine was once again operational but closed in 1923. It was reopened for the last time at the beginning of World War II, but the hoped-for high prices for mercury did not materialize, and the mine closed for the last time in 1943. Today, the ruins continue to stand in a remote location in the middle of Big Bend National Park. Listed on the National Register of Historic Places, the Mariscal Mine is the best-preserved mercury mining site in Texas. It can still be reached with a high clearance vehicle.

In the meantime, work had been in progress to make the Big Bend area a state park. In the 1930s, Texas passed legislation to acquire land for what was to become the Texas Canyons State Park. In 1935, the Federal Government passed legislation that would enable the acquisition of the land for a national park. The State of Texas deeded the land they had acquired to the Federal government, and on June 12, 1944, Big Bend National Park became a reality. 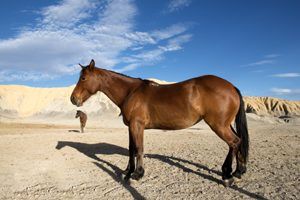 Today, the park is dotted with old buildings and ruins, the physical remains of past settlements. Thousands of archeological sites hold remnants of the material remains of 10,000 years of Indian occupation of the Big Bend.

The park exhibits dramatic contrasts in its climate, with dry and hot late spring and summer days often exceeding 100 F° in the lower elevations. Though winters are generally mild throughout the park, sub-freezing temperatures occasionally occur. It’s these extreme variations in temperature that contribute to an exceptional diversity in plant and animal habitats.

Big Bend National Park headquarters is located 70 miles south of Marathon, Texas, and 108 miles from Alpine, Texas via Hwy. 118. Adjacent to the National Park, Big Bend Ranch State Park covers another 311,000 acres and is the largest State Park in Texas. 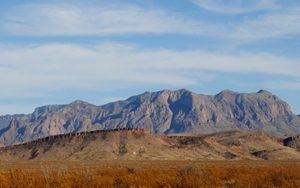