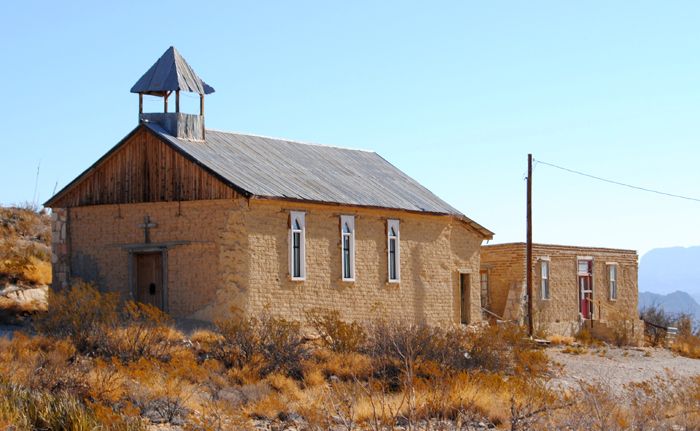 Old church in the ghost town of Terlingua, Texas by Kathy Weiser-Alexander.

The name “Terlingua” actually applies to a mining district, and there were three different settlements located here in southwestern Brewster County. The name derives from two Spanish words, tres, and lenguas, meaning “three tongues,” called such for one of two reasons. Still debated today, some say “three tongues” refer to the three languages spoken in the area long ago – English, Spanish, and Native American. The second reason refers to the three forks of Terlingua Creek.

The first settlement in the area was a Mexican village located on Terlingua Creek three miles above its confluence with the Rio Grande. In the mid-1880s, cinnabar, from which the metal mercury is extracted, was discovered, which would slowly change the region from a single sleepy village into a mining district. 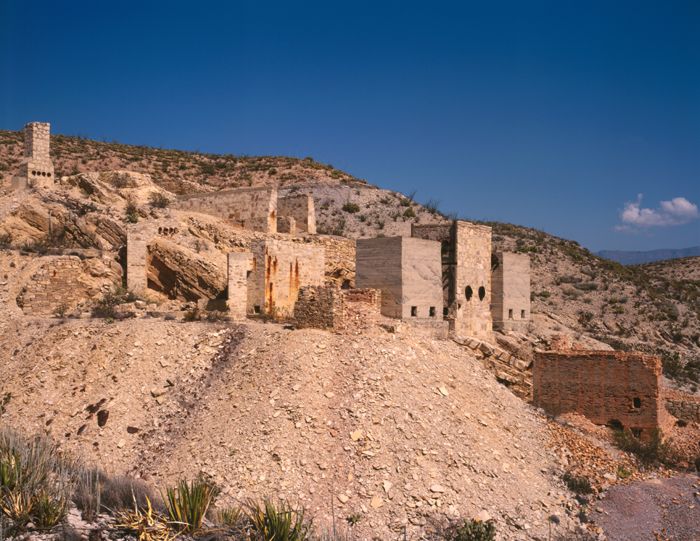 Ruins of the Mariscal Quicksilver Mine & Reduction Works in Terlingua, Texas by Bruce Harms, 1997.

The local Indians had long known about the cinnabar, which they prized for its brilliant red color for body pigment. Later, other Mexican and American prospectors also found it, but the remoteness of the area, lack of water and hostile Indians deterred any mining.

However, with the Indian threat past, several locals began small mining operations by the late 1880s and began to produce mercury – usually called quick-silver at the time. The earliest commercial production was primitive, easily taking out the surface outcroppings of ore and utilizing burro-drawn carts to haul the ore to collecting points where it was hand sorted. It was then placed in simple furnaces and heated until the mercury was condensed into its liquid form. These first surface ores were so rich that these primitive methods were enough to produce commercially salable amounts.

In 1884, a local man by the name of Juan Acosta found more cinnabar in the area and worked with an investor named Klein to develop his claim. However, they sold out to a group of California men, who would later start one of the first major mining operations, calling their claim “California Hill.” 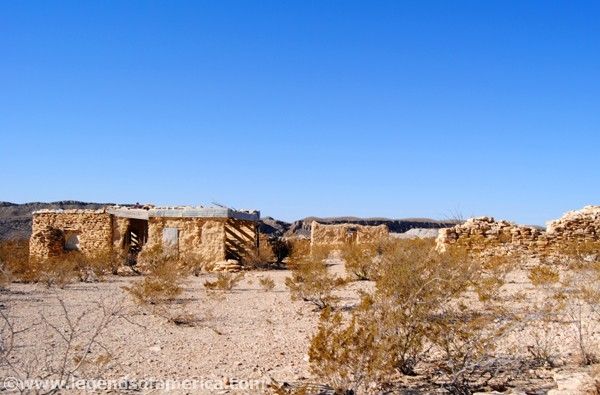 Still, there would be no major mining operations until later as the land had not been properly surveyed. After that occurred in the summer of 1898, the Marfa and Mariposa Mining Company erected the first large furnace in the district.

By the turn of the century, the word was out that the region was rich in mercury, and by the spring of 1900 about 1,000 flasks of the liquid metal had been extracted by four major producers – Marfa and Mariposa, California Hill, Lindheim & Dewees, and the Excelsior Company.

By that time, a new town had sprung up around the Marfa and Mariposa Mine. It too, became known as Terlingua and the first village was then referred to as Terlingua Abaja or lower Terlingua. It gained a post office in 1899.

In 1902, the mining camp was described by Stuart T. Penick, a member of the U.S. Geological Survey party:

“Terlingua was a sprawling camp of temporary sheds and shelters composed of various kinds of material, such as tin, canvas, old sacks, sticks, and adobe bricks. The only permanent buildings were the commissary and smelter. There were from 200-300 laborers of Mexicans. They seemed to be temporary, for very few of them had families.”

In the meantime, Howard E. Perry, a Chicago industrialist, who had purchased 4.5 sections of land in Brewster County, Texas, for $5,760 in 1887, decided to get in on the action as well. 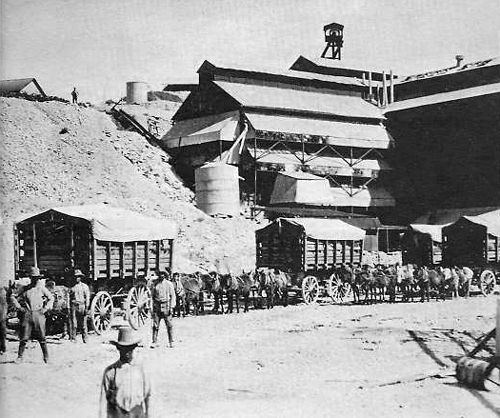 Chisos Mine in its heydays.

In May 1903, he incorporated the Chisos Mining Company and the organization reported the first production that same year. It would become the largest producing mine in the area and for a time the largest mercury producer in the United States. Production at the mine continued for four decades.

By 1905, the population of Terlingua at the Marfa and Mariposa Mine had increased to about 1,000 people. At the same time, another camp had formed around the Chisos Mine, which was also called Terlingua. In May 1910, the Marfa and Mariposa Mine played out and closed. Its post office was then moved to the “new” Terlingua at the Chisos Mine some ten miles to the east. 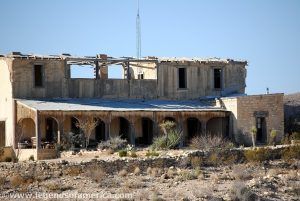 The Chisos Mining Company also owned and operated the entire “new” town of Terlingua. It ran the large general store, provided a company doctor, operated the post office, the Chisos Hotel, a commissary, erratic telephone service, dependable water service, and a school. Later, it would also operate a gasoline station, a theater, and a confectionery shop. Growing to a population of over 1,000 people, the town was split into two sides – one for Mexicans and the other for Anglos. Overlooking the entire camp was a mansion built by mine owner Howard Perry in 1906. Though he actually spent little time in the camp, it was enlarged in 1911 from one to two stories and contained nine bedrooms.

Initially, the company processed the cinnabar ore in primitive retorts, where the silver liquid metal was recovered through a simple baking process. 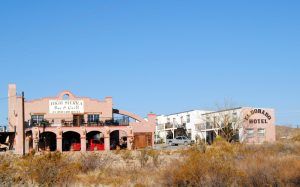 The Eldorado Hotel in Terlingua, Texas by Kathy Weiser-Alexander.

As production increased, Perry turned to more industrialized methods, including the installation of a 20-ton Scott Furnace in 1908. Exploration continued, and in 1914 the company discovered one of the richest veins of cinnabar ore in the Terlingua district. This discovery coincided with the outbreak of World War I, and with the increased military demands for the product, the company entered its most successful period.

The following year, a bigger and even more modern furnace was installed. Prior to the use of mechanized vehicles in the early 1930s, mule-drawn wagon trains delivered the quicksilver to the railroad at Alpine, Texas. Within one ten-day period in September 1916, two carloads of quicksilver from the Chisos Mine were shipped from Alpine, valued at more than $50,000.

Though owner, Howard Perry was rarely there, he maintained absolute control over the mine through daily correspondence and loyal administrative staff. 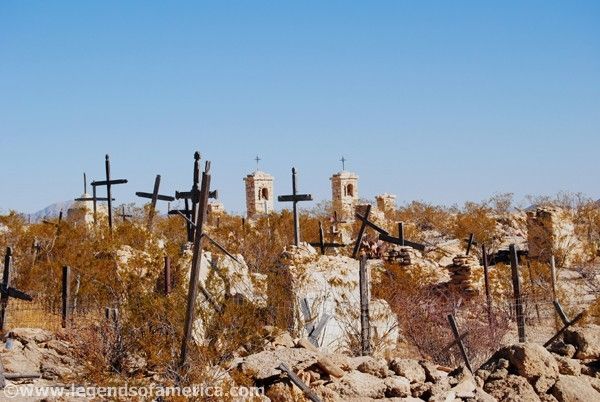 Though secrecy surrounded the operation, it was estimated that by 1934 the company had sold over $12 million in mercury and one employee claimed the company averaged daily profits of $2,000 during the early war years. But, like other mines, it wouldn’t last forever. After 1936 production declined, and on October 1, 1942, the company filed for bankruptcy. It was sold on March 15, 1943, to the Texas Railway Equipment Company for $81,000. It was then operated as the Esperado Mine through the end of World War II in 1945. Afterward, the surface installations were sold for salvage.

Though the vast majority of the people moved out of Terlingua when the mine closed, it continued to support a population of about 350 people up until the late 1940s. Afterward, it declined to such a point that it was a true ghost town.

Due to its proximity to Big Bend National Park, tourism brought new life to the village in the late 1960s and early 1970s. However, its growth was slow. By the mid-1990’s it had only about a population of 25. Today, the area supports a population of more than 250 people and remains a popular tourist destination. Rafting on the Rio Grande, mountain biking, camping, hiking, and motorcycling are some of the outdoor activities favored by tourists. Terlingua is also famous for its annual chili cook-off and in 1967 was deemed the “Chili Capital of the World.” The former company store is now a gift and art shop, river float trips are scheduled in the former cantina, and a dinner theater occupies the former motion picture theater. Located throughout the area are ruins of former buildings and abandoned mines. Terlingua is located near the Rio Grande, between the villages of Lajitas and Study Butte, Texas. 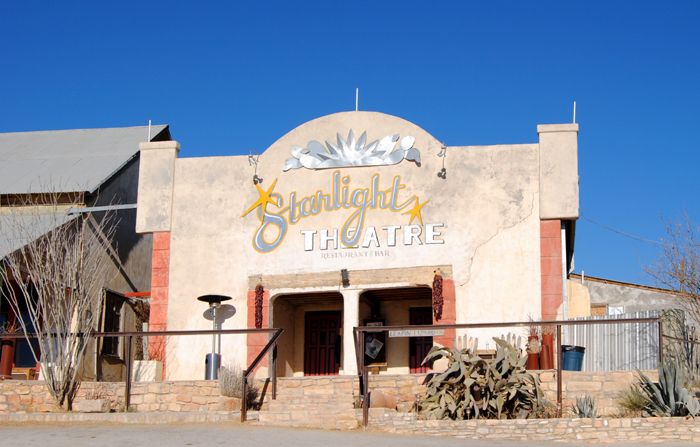