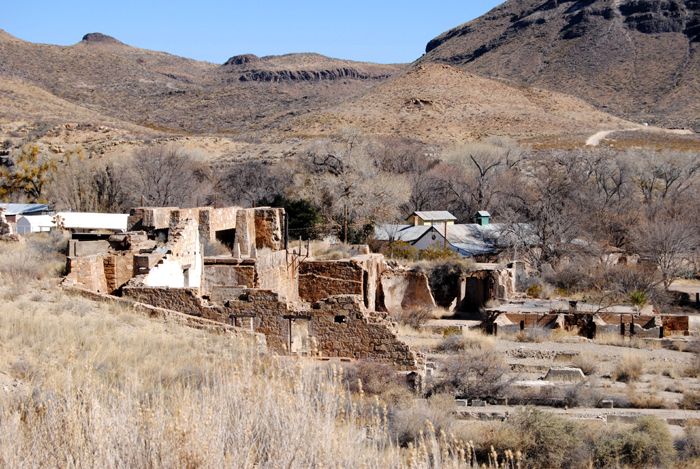 Shafter, Texas, a ghost town located at the east end of the Chinati Mountains 18 miles north of Presidio, has a long history closely tied to silver mining. It was the first major mining town established in west Texas and the only successful silver mining area. This once bustling town had a population of as many as 4,000 people, but today is mostly quiet and called home to only a few families.

Long before the town of Shafter was established along Cibolo Creek, there is evidence that Spaniards prospected for valuable ores in the area during the early 1600s.

The first mineral survey of the Chinati Mountains region was done by S. B. Buckley in 1876, who noted the presence of lead, silver, and copper. A few years later, in September 1880 John Spencer, a rancher and freighter on the Rio Grande, noted a silver-rich ledge while traveling to Fort Davis. He collected a sample which he took to Colonel William R. Shafter, commander of the First Infantry Regiment at Fort Davis, who had it assayed.

After finding profitable amounts of silver in the ore, William Shafter, along with two army friends, Lieutenants John L. Bullis, and Louis Wilhelmi, began to work on a land deal on the acreage surrounding Spencer’s strike, petitioning the State of Texas to sell some of the property in the area. Though the three partners petitioned for the land individually, they verbally agreed to make Spencer a partner and to share equally in the profits earned from the acreage. Though the partners were able to buy four sections of land (2560 acres), they lacked the capital and the technical expertise to mine the ore.

In June 1882, they leased some of their acreage to a San Francisco, California mining group who organized the Presidio Mining Company. The company soon found a silver deposit valued at $45 a ton and development began on the Presidio Mine. Eventually, the four partners sold their interests to the company in exchange for each seller receiving 5,000 shares of company stock and $1,600 cash. 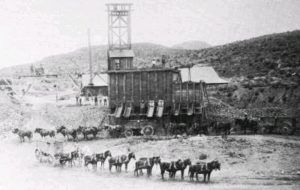 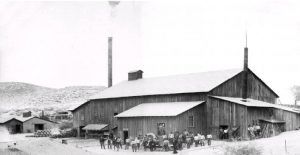 Development proceeded quickly and mining machinery was hauled to the site — part of the way by train and then by freight wagon. The Presidio Mining Company then hired more workmen and installed its own milling machinery. Mule-drawn wagons hauled the ore from the mines one mile to the mill at Shafter until 1913 when a tramway was built. 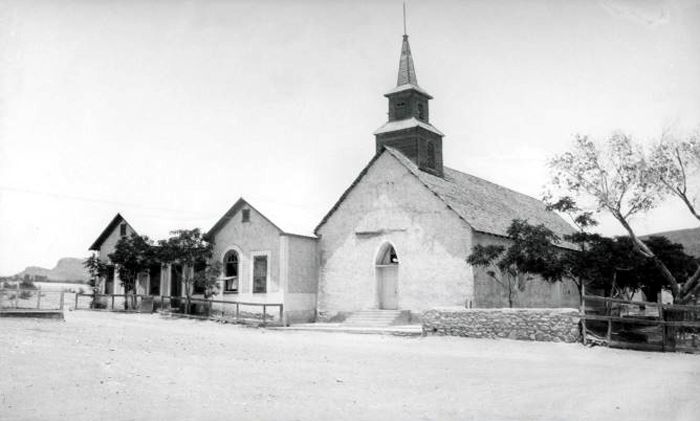 Before long a settlement began to grow around the mining operation which took the took the name “Shafter” after the Major. A post office opened in 1885 and the company provided housing for the miners. The miners shopped at the company stores for their staples and a company doctor provided medical care. Eventually, the company also provided a clubhouse and a hospital for the miners and their families. The Sacred Heart of Jesus Catholic Church was established in the community in 1888, which became a large part of the town’s social life. Construction continued on the large adobe complex for about six years until a school and accommodations for a priest and nuns were added. 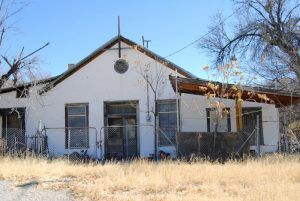 A house in Shafter, Texas today.

Generally, there were about 300 employees working for the mining company that came from several ethnic groups and geographical areas. Mexicans from both sides of the border and African Americans found better-paying jobs at the mine and many miners worked there until many left to prospect in the Klondike Goldrush in Alaska in 1897.

In May 1890, troubles between Mexican miners and Anglo mine officers erupted and Company D of the Texas Rangers was moved to the Trans Pecos area. On August 4, 1890, a fight broke out at a dance at a private residence in Shafter, in which Ranger Private John F. Gravis was in attendance. When a gunfight erupted, Gravis, as well as several other people, were killed. Afterward, Captain Jones arrived with several rangers and began rounding up suspects and returned to Marfa, Texas with seven men under arrest for murder. Three more men were arrested as they tried to flee to Mexico. In the end, it is unknown if anyone was convicted for the killing Gravis. 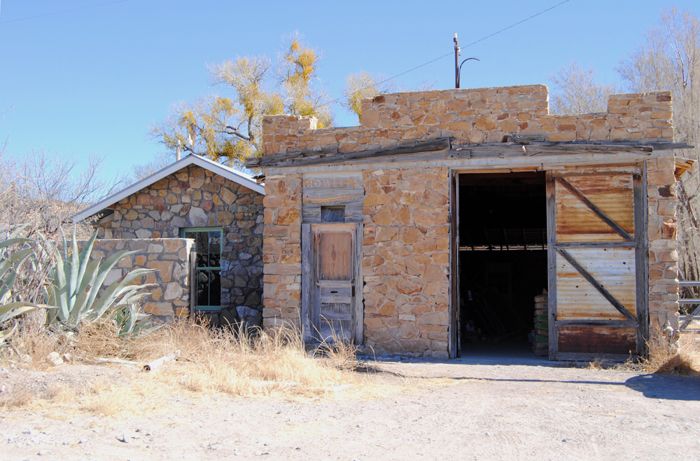 By 1900, Shafter’s population had continued to grow and the town sported two saloons, a dance hall, blacksmith shops, a church, school, and four retail stores. At this time, six silver mines were in operation near Shafter. During these years, the mines were doing well, with annual production from 1898 to 1913 averaging 20,000 tons.

By 1913, mules and wagons were replaced by a tram to haul the ore out. The same year, the 50-ton mill was replaced with a larger 300-ton capacity mill and the recovery process was changed from mercury to cyanide. This would increase production from 1913 to 1926 to 84,000 tons.

In the meantime, the Mexican Revolution began in 1910, which changed border life in Texas, as numerous refugees migrated to the area. This prompted a Border War, which caused the United States Army to establish several posts in Texas, including one in Shafter in 1916 that was occupied by the National Guard. The 50 soldiers encamped in Shafter was enough to discourage Mexican bandits from raiding the mines and the town. 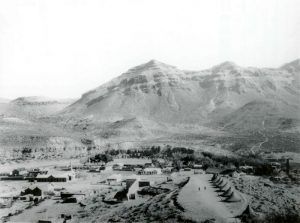 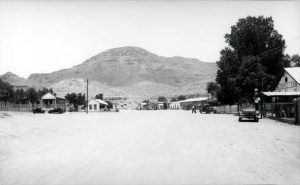 In 1926, the American Metal Company of Texas acquired the mine, but operations ceased in 1931 due to low silver prices. This left 300 families out of work and many mine workers moved away. In July 1934. the mines reopened during the Franklin Roosevelt’s New Deal Program.

Shafter reached its peak population in 1940, with as many as 4000 residents. But, it wouldn’t last. In 1942, due to labor problems, lower grades of ore, depletion of the silver reserves, and some flooding in the mines, the operation closed. Afterward, the equipment was dismantled and removed and timber was salvaged from the roofs of many of the houses. 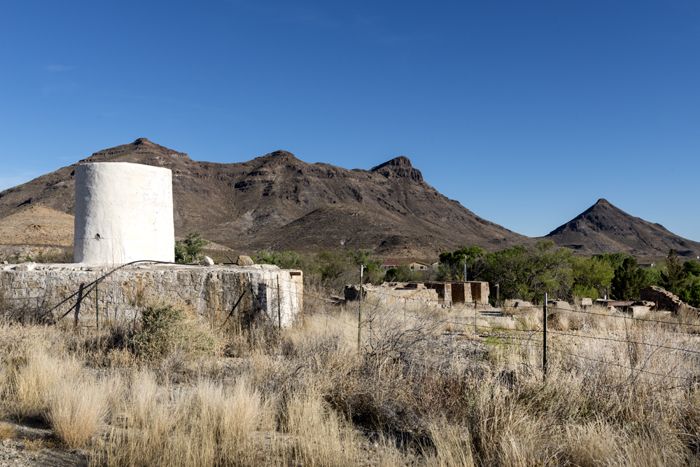 By 1943, Shafter’s population had been reduced to about 1500, but it still had 12 businesses and stayed alive serving two military bases in the county — Marfa Army Air Field and Fort D.A. Russell. however, Marfa Air Field closed in December 1945 and Fort Rusell closed the following year. 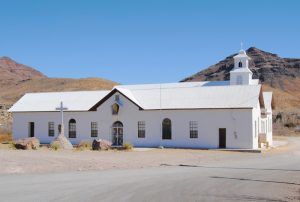 The population of Shafter then went into a rapid decline and by 1949, it was called home to only 20 people.

From the 1950s through the 1970s several attempts were made to reopen the Presidio Mine at Shafter. The original townsite, designated the Shafter Historic Mining District, was added to the National Register of Historic Places in 1976.

Gold Fields Mining acquired the Presidio Mine at Shafter in 1977 and new deposits of silver were discovered by 1982. Ownership then transferred to the Rio Grande Mining Company in 1994 and Silver Standard Resources, Inc. in 2001. The Canada-based Aurcana Corporation acquired the mining project in 2008. The potential for renewed economic activity in the area led to a slight rebound in population, which reached approximately 57 in 2009. 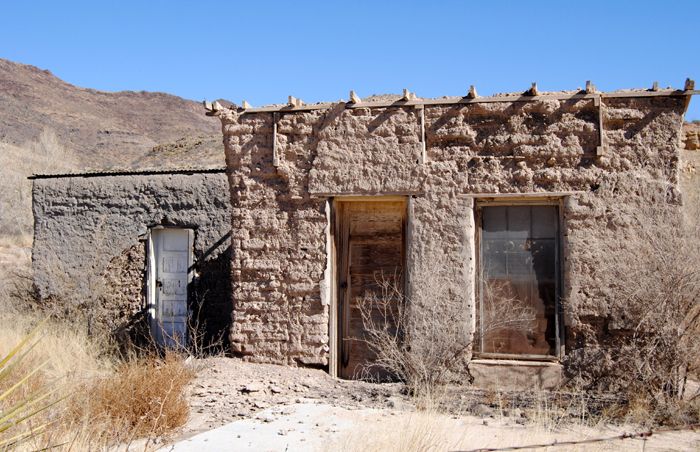 Aurcana Corporation completed construction of a new mine portal, built a 24,000 square foot warehouse complex, and the construction of a mill by 2012. However, mining operation were suspended indefinitely in 2013 following a sharp decline in silver prices.

Today, Shafter is home to only a few families with a registered a population ranging from 11 to 30 persons. Shafter is located on Cibolo Creek and U.S. Highway 67, 18 miles north of Presidio, Texas. 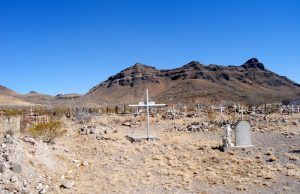