The Siege of Port Hudson, Louisiana was the final engagement in the Union campaign to recapture the Mississippi River during the Civil War. While Union General Ulysses Grant was besieging Vicksburg, Mississippi upriver, General Nathaniel Banks was ordered to capture the lower Mississippi Confederate stronghold of Port Hudson, in order to go to Grant’s aid. When the initial assault failed, Banks settled into a 48-day siege, the longest in U.S. military history up to that point. A second attack also failed, and it was only after the fall of Vicksburg that the Confederate commander, General Franklin Gardner surrendered the port. The Union gained control of the river and navigation from the Gulf of Mexico through the Deep South and to the river’s upper reaches. 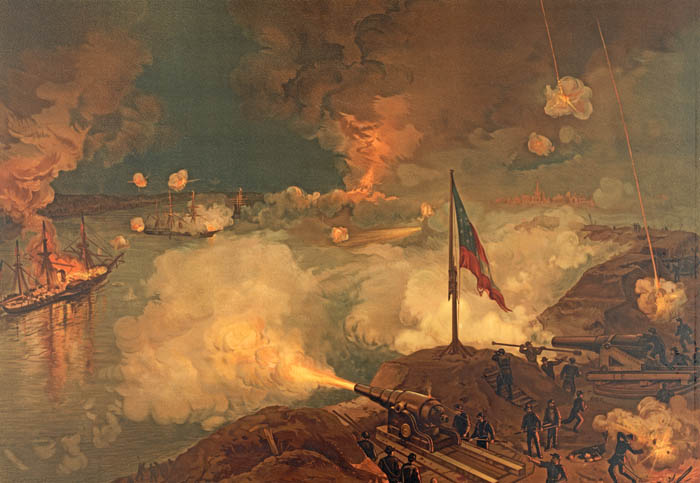 Plains Store – May 21, 1863 – Part of the Siege of Port Hudson, this battle occurred when Major General Christopher C. Augur’s Union division advanced from Baton Rouge. Early in the morning of May 21, 1863, they came to the intersection of Plains Store and Bayou Sara roads on the way to secure a landing on the river for Major General Nathaniel Banks. Colonel Benjamin H. Grierson’s cavalry, in the lead, encountered Confederate forces under the command of Colonel Frank P. Powers and skirmishing ensued. As the morning progressed the Union infantry approached the crossroads and came under fire, bringing on a general engagement. At noon, Colonel W.R. Miles set out for Plains Store with Confederate reinforcements. By the time Miles arrived in the area late in the day, the fighting had ceased, the Rebel forces had retreated, and the Federals were preparing camps for the night. Miles attacked the Union forces and, at first, drove them, but they regrouped and counterattacked. Miles could not stand against the overwhelming Union force and retired into the Port Hudson perimeter. The battle ended, and the last Confederate escape route from Port Hudson was closed. The Union victory resulted in 150 Union casualties and 100 Confederate. 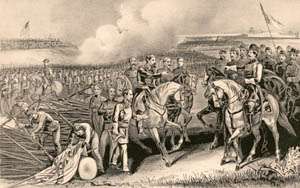 Port Hudson, Louisiana surrenders to the Union in the Civil War. Image by Currier & Ives.

Port Hudson – May 21-July 9, 1863 – Called the Siege of Port Hudson this was fought in cooperation with Major General Ulysses S. Grant’s offensive against Vicksburg. Union Major General Nathaniel P. Banks’ army moved against the Confederate stronghold at Port Hudson on the Mississippi River. On May 11th, Banks learned that some Confederates had been moved from Port Hudson to support the forces defending Vicksburg. Dividing his forces into two columns, one group approached from the north while the other advanced north from Baton Rouge. By May 21st, the columns had combined and Banks’ force of about 30,000 men surrounded the Port Hudson outnumbering the Confederates four to one. Delaying for nearly a week organizing his forces. This gave Confederate Major General Franklin Gardner time to reinforce his lines and move additional artillery into place.

Banks, supported by U.S. Navy gunships, finally made a series of uncoordinated attacks on May 27th that were unsuccessful. After their frontal assaults were repulsed, the Federals settled into a siege that lasted for 48 days. Banks renewed his assaults on June 14 but the defenders also successfully repelled them. On July 9, 1863, after hearing of the fall of Vicksburg, the Confederate garrison of Port Hudson surrendered, opening the Mississippi River to Union navigation from its source to New Orleans. Though the battle was a Union victory, the losses were staggering. Of the 30,000-40,000 Union soldiers involved 5,000 were killed or wounded and another 5,000 died of disease. The Confederates suffered 750 killed and wounded and 250 dead of disease. The other 6,500 men surrendered.