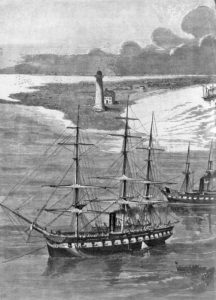 On the day before the Capture of New Orleans in April 1862, the Confederate state government decided to abandon Baton Rouge, Louisiana. They first moved to Opelousas and then to Shreveport. All cotton in the area was set afire to prevent it from falling into Union hands. On May 9, Navy Commander James S. Palmer of the federal gunboat USS Iroquois landed at the town wharf and took possession, without resistance, of the Pentagon Barracks and the arsenal. Two weeks later, a party of guerrillas attacked a rowboat carrying a naval officer. In retaliation, Flag-Officer David G. Farragut’s flagship, the Hartford, bombarded the town, causing civilian casualties and damaging St. Joseph’s Church and other buildings. On May 29, U.S. Brigadier General Thomas Williams arrived with six regiments of infantry, two artillery batteries, and a troop of cavalry and began the occupation of Baton Rouge.

That summer, Confederate Major General Earl Van Dorn resisted a Union bombardment of Vicksburg, Mississippi. The Confederate ironclad ram Arkansas had come down the Yazoo River, inflicting damage on the unprepared Union fleet as she passed through, and was anchored in Vicksburg. Van Dorn also wanted to regain Baton Rouge, believing it would be key to driving the Union out of Louisiana and eventually threaten Union control of New Orleans.

Led by Major General John C. Breckinridge, 5,000 troops from Vicksburg headed for Camp Moore on July 27, 1862. They were joined by a small infantry division led by Brigadier General Daniel Ruggles. Simultaneously, the Arkansas was sailing down the Mississippi River en route to engage Union ships near Baton Rouge.

Union Brigadier General Thomas Williams reportedly got word of the Confederate forces’ departure from Camp Moore on July 28. On August 4, after information was again received of the imminent arrival of the enemy, Union troops were formed about a mile outside of Baton Rouge. 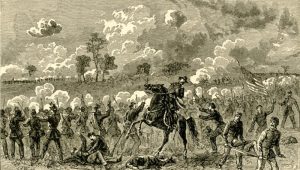 Death of Brigadier General Thomas Williams in the Battle of Baton Rouge, Louisiana.

Baton Rouge – August 5, 1862 – In an attempt to regain control of the state, Confederates wished to recapture the capital at Baton Rouge. Major General John C. Breckinridge planned a combined land/water expedition with his corps and CSS Ram Arkansas. Advancing west from Camp Moore, the Confederate land forces, coming from the east, were only ten miles away on August 4. They reached the capital’s outskirts early in the morning, formed for an attack in two divisions, and began to drive back each Union unit they encountered. Then, Union gunboats in the river began shelling the Confederates. The Arkansas could have neutralized the Union gunboats, but her engines failed, and she did not participate in the battle. Federal land forces, in the meantime, fell back to a more defensible line, and the Union commander, Brigadier General Thomas Williams, was killed soon after. The new commander, Colonel Thomas W. Cahill, ordered a retreat to a prepared defensive line nearer the river and within the gunboats’ protection. Rebels assailed the new line, but finally, the Federals forced them to retire. The next day the Arkansas‘ engines failed again as she closed on the Union gunboats; she was blown up and scuttled by her crew. The Confederates failed to recapture the state capital. The Union victory resulted in 371 Union casualties and 478 Confederate.

Donaldsonville I – August 9, 1862 – Part of the Confederate Offensive Against Baton Rouge, a retaliatory attack was made on the Mississippi River at Donaldsonville by the U.S. Navy. This occurred after Union steamers had been fired upon as they passed. Rear Admiral David G. Farragut sent the town notice of his intentions and suggested that the citizens send the women and children away. He then anchored in front of the town and fired upon it with guns and mortars. Farragut also sent a detachment ashore that set fire to the hotels, wharf buildings, dwelling houses and other buildings of Captain Phillippe Landry. Landry thought to be the captain of the partisan unit, purportedly fired on the landing party during the raid. Some citizens protested the raid, but, generally, firing on Union ships ceased afterward. There were no casualties in the offense.