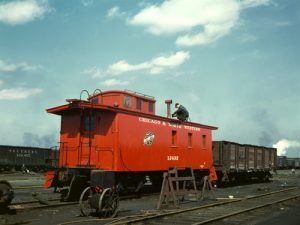 The Chicago and North Western Railroad (C&NW), sometimes simply known as the North Western Railroad, was originally chartered by the legislatures of Wisconsin and Illinois on June 7, 1859, after purchasing the bankrupt Chicago, St. Paul and Fond du Lac Railroad, which began in 1855. Six years later, in February 1865, it officially merged with the Galena and Chicago Union Railroad, which had been chartered on January 16, 1836. Continuing to invest, the line owned a majority of stock in the Chicago, St. Paul, Minneapolis and Omaha Railway by 1882.

For many years, the railroad company picked up other smaller lines, and by 1910, when it reached its peak, it was probably the largest and most profitable of the Midwestern railroads.

Though the automobile had much-reduced railroad travel by this time, the company still continued on. In January 1958, it finalized the acquisition of the Litchfield and Madison Railroad, in November of 1960, it acquired the rail properties of the 1,500-mile Minneapolis and St. Louis Railway.

It officially leased the Chicago, St. Paul, Minneapolis and Omaha Railway (Omaha Road), and merged it into the North Western in 1972. Mergers and acquisitions continued until the railroad finally ceased to exist when it was acquired by the Union Pacific Railroad in April 1995. At its peak, the railroad operated more than 5,000 miles of track in seven states.