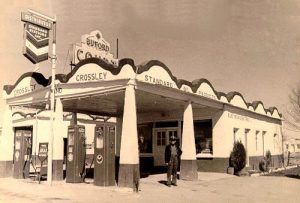 The Crossley Standard Oil Gas Station in Moriarty continues to stand, last known to be utilized as a shoe store.

When traveling Route 66 from Cline’s Corners, New Mexico, your next stop will be Moriarty, home of the Fighting Pintos. Established in 1887, Moriarty was named for Michael Moriarty, one of its original homesteaders. In its early days, most of its residents were dry land farmers. Still dependent upon area farming, today’s more sophisticated farmers utilize large pivotal irrigation rigs to raise alfalfa, feed corn, wheat, pinto beans, pumpkins, and other crops.

In 1903 the Santa Fe Central depot was completed and today traces of the old railroad bed can still be seen. The metal-sided depot, one of four such structures on the mainline from Santa Fe to Torrance, continues to stand.

Later known as the New Mexico Central Railroad, the line was absorbed by the Santa Fe Railroad in 1926. The depot was replaced by a small frame building and a wooden boxcar in 1949. The original depot passed through several hands over the years serving as a feed store, a workshop, and a Catholic Church.

Moriarty became a part of Route 66 in 1938 with the re-alignment of the highway. The small town, like many others along Route 66, rose to the occasion with a number of motor courts, restaurants and other services. Many of these continue to stand and operate in today. 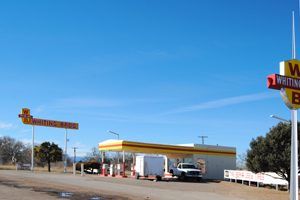 As you first enter the town you will see the Sunset Motel and the last operating Whiting Brothers Service Station on the right side of the road. Across the highway is the Sands Motel.

In the southwest, Whiting Brothers gas stations were a familiar sight along Route 66, a tradition that continued until the 1990s when the gas station chain ended. The old Whiting Brothers station in Moriarty is the only one that is left thanks to Sal Lucero, a lifelong employee of Whiting Brothers. In the 1980s, Lucero bought the station from the Whiting Brothers and never bothered to change the name. Today it continues to stand as a tribute to the heydays of Route 66.

A bit further down you’ll see the Boot Shoe Shop, which was once home to the old Crossley Service Station. Across the street, stands the old Yucca and Cactus Motels, long closed, as well as the Lariat and Ponderosa Motels, which continue to operate to this day. While in Moriarty, be sure to check out the El Comedor Restaurant’s new restored “rotosphere.” Consisting of two vertically counter-rotating spiked hemispheres, the entire unit rotates horizontally above a pole. Each of the 8-foot long rainbow-colored spikes are individually outlined in neon. The rotosphere is believed to be the only operational one of its kind along the entire length of Route 66 thanks to the Route 66 Neon Restoration Project. The project, managed by the New Mexico Route 66 Association, partnering with the New Mexico Historic Preservation Division and the National Park Service Route 66 Corridor Preservation Office, has restored the rotosphere as well as ten other vintage Route 66 signs across New Mexico. The El Comedor is located at 1005 Route 66.

While in Moriarty you can also stop at the Moriarty Historical Society Museum, housed in the town’s first fire station. The museum focuses on the growth and development of the town during its early railroad days. Located at 777 Old U.S. Route 66, admission is free. 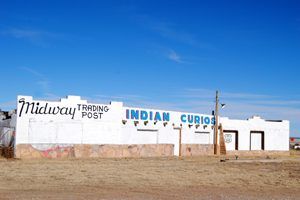 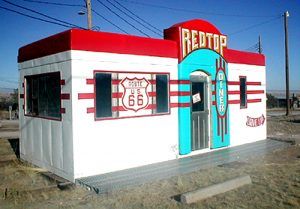 Homesteaders moving into the American West created the initial settlements that grew into what is now the town of Edgewood. Founded in the early 1930s, Edgewood is a “young” town by New Mexico standards. Established just in time to meet the needs of the changed 1937 Route 66 alignment, Edgewood exudes the very essence of the Mother Road. All manner of motor courts and other services soon popped up.

Today, due to its proximity to Albuquerque it is one of the fastest-growing communities in the state. Though its population is about 3700 people,  the area abounds with horse properties and it’s not unusual to see modern-day cowboys riding their steeds along the roadways.

The original two-room schoolhouse still stands travelers might want to visit the Wildlife West Nature Park where you can view numerous native New Mexican animals, including whitetail deer, bobcats, cougars, coyotes, javelinas, raptors, mountain lions, and wolves. Trails through the 122-acre park are constructed through natural habitats. The park is located at exit 187.

Also in Edgewood is an old Valentine Diner that once stood in Magdelena, New Mexico before it was purchased by Jerry Ueckert and moved to Edgewood. The diner had extensive damage and now has been fully restored. It is located on Route 66.

Just about three more miles will bring you to Barton, New Mexico, officially a ghost town, but really not much more than a scattering of buildings that are now considered part of Edgewood. Named for an early resident, Barton received a post office in 1908, but by 1936, it closed and area residents received their mail from Edgewood. In 1946, Jack Rittenhouse described the town as having a gas station, a grocery store, and a few cabins. At the corner of old Route 66 and Mountain Valley Road, once stood an old Conoco gas station. Though it is gone today, the site is still home to a couple of old gas pumps, a few rusting cars, and the original Barton jail which once detained such outlaws as the Dawson Gang. From Barton, the highway continues to climb toward Tijeras. 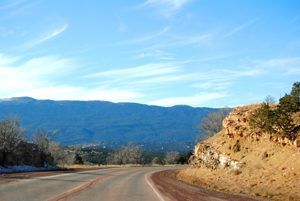 Route 66 climbs to some 7,000 feet elevation up Sedillo Hill to Sedillo, New Mexico. The town was named for Pedro de Cedillo, who was originally a native of Queretaro, Mexico. Arriving in the area before the Pueblo Revolt of 1680, he served as a captain until he and his family were forced out of the area. His descendants returned to New Mexico after the re-conquest of 1692. In 1819, one of his descendants, Esteban Sedillo was given land in Tijeras Canyon east of present-day Tijeras. Soon afterward, the Sedillos moved east to the town now named for them.  Beyond Sedillo, the route begins to drop down into the valley through Tijeras Canyon.