As you head west out of Tucumcari on old Route 66, the highway parallels the railroad through a combination of cultivated fields and prairies filled with yucca and bunchgrass. Sandstone outcroppings and rock ridges can be glimpsed among the cattle grazing in the pastures. Also along this stretch onwards to Santa Rosa are several old ghost towns on both sides of the highway including Montoya, Newkirk, and Cuervo. 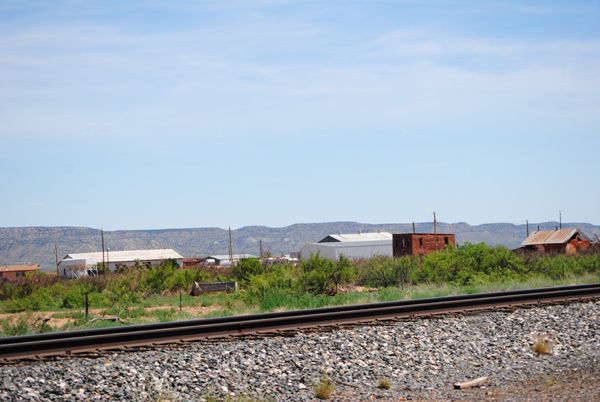 Some 22 miles later you will reach the defunct village of Montoya, straddling both sides of old Highway 66. As you near the ghost town of Montoya you will pass by an old cemetery on the south side of the road.

This town was born as a loading point for the Southern Pacific Railroad in 1902; but, even before the steam engine pushed through, there were several villagers living at this place they then called Roundtree.

On the north side of Route 66 are a couple of old buildings that now sit behind a fence on a private ranch. Not too many years ago, these buildings were surrounded by nothing but wild prairie. Today, the few remaining buildings on the north side of the old road are almost hidden in between several industrial-style buildings. 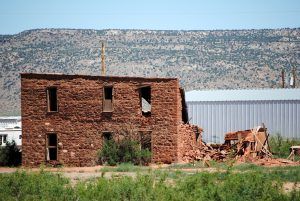 Still standing the test of time, is an old two-story rock house, built by Sylvan R. Hendren and Maria Ignacia Ulibarri Hendren. The Hendren’s great-granddaughter, Ramona Taylor, tells us that, as with many pioneering couples of the time, her great grandparents helped settle the territory of New Mexico. Taylor says the old two-story stone structure was a four-room house affectionately called “Casa Alta” which means “tall/high house.” The living room and kitchen were on the first level and two large bedrooms on the second story. A large cistern sat behind the home.

When Route 66 pushed through Montoya, several services were made available to those early travelers including Richardson’s Store and Sinclair Station. Opening in 1925, this old store continued to do business until the mid-1970s when its owner passed away. During the Mother Road’s heyday, it was a popular stopping point. You can still see what remains of this old mercantile beyond a chain-link fence, where the old gas pumps stood several years ago, but, are gone today. Nearby, is an old building sporting the words “Cold Beer” painted across its side. With two tall concrete posts in front of the building, this also appears to have been a gas station-store. Interestingly, east of the Cold Beer building is an old-fashioned wooden teeter-totter. In between is a large foundation suggesting this might have been a school once upon a time. 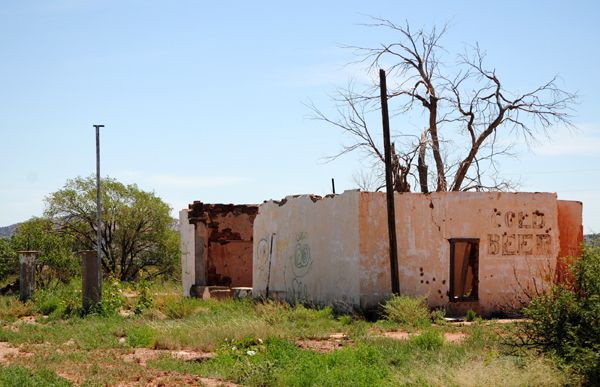 West of Montoya, the old highway rides the plains dotted with juniper, mesquite, and more falling buildings for the next 12 miles, until your reach yet another ghost town – Newkirk. It is along this stretch of the old highway that you will pass over what was the Goodnight-Loving Trail where cowboys once herded thousands of head of cattle northward to markets in Denver, Colorado, and Cheyenne, Wyoming. 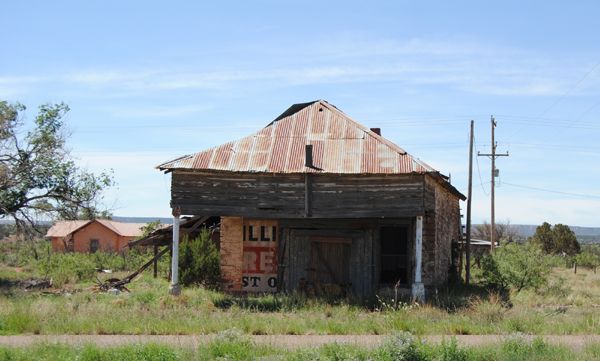 Originally known as Conant, this old settlement changed its name when the railroad came through in 1901. The new name came from a local resident who originated from Newkirk, Oklahoma.

Growing slowly, the town sprouted several new businesses when Route 66 came through. In the 1930’s it had a population of about 240 but had already started to fall by the mid-1940s when it only supported some 115 residents. However, at this time it boasted four gas stations, two restaurants, a trading post, and a few cabins to service the travelers of the Mother Road.

As you enter town you will see the ruins of the old Shamrock gas station and a faded tavern once known as C and S Bar, or Carlos’s place. Just beyond are several falling down shacks and a broken up wooden train car. Back in the old days, these were often made into rudimentary homes. 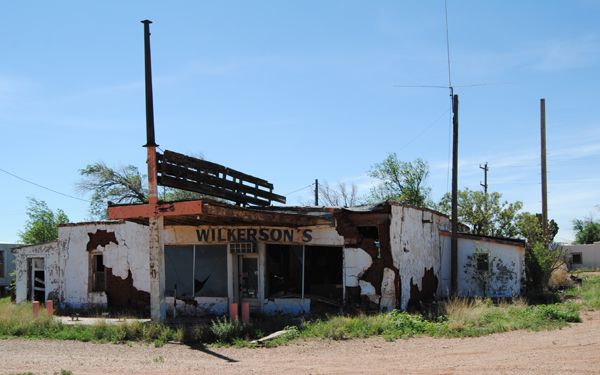 Next, you’ll see what remains of Wilkerson’s Store and Gulf Gas station, which survived the I-40 bypass all the way up until 1989. Near here is also an unidentified falling down motel and a small little building with the strangest sign in the window. It says: “Figural Bottles,” which are bottles shaped like other items, such as a pig, a violin, a fish, etc. Usually, these are antiques and this was probably an antique store at one time.

The post office, established in 1910, doubled as a gas station and a store. Shut down long ago, the fading relic still stands.

As you head just a bit more down the old road, there is an open Phillips 66 station just off of the I-40 exit. It’s a bit odd that this entire town, with off-ramps from both directions of the interstate, has totally faded into nothingness. An old church sits just south of the Phillips 66 station next to I-40. With cracks in its adobe structure and weeds growing right up to its door, this old place of worship hasn’t seen a mass in many years.

Continuing along the old road, take caution as it is rough and narrow with many low spots that could quickly fill with water during seasons of rain and snow. Cuervo, another ghost town is just about nine miles ahead. 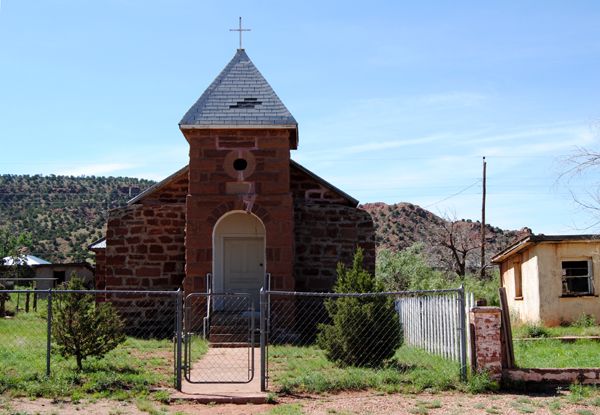 Between 1901 and 1903, the Southern Pacific pushed through Cuervo and a town was born. Named after nearby Cuervo Hill, Cuervo is Spanish for “crow,” which are abundant in the area.

Around 1910, the land surrounding Cuervo was opened to cattle ranching which created a land boom and the town began to grow. When Route 66 came through, the new highway created the additional trade of gas stations and hotels.

At its peak, Cuervo boasted two schools, two churches, two hotels, and two doctors, along with numerous other businesses. In the 1930s, Cuervo reportedly had a population of almost 300. By the mid-1940s; however, it had already fallen to less than 150. 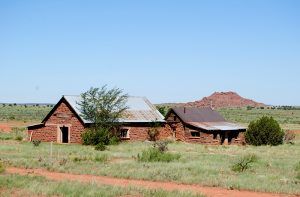 The Baptist Church sits on the north side of I-40, Cuervo, New Mexico

When I-40 came along, parts of Cuervo were literally buried as the superhighway cut a swath through the residential section of the town. Dependent upon those travelers of the Mother Road, the town immediately began to die. Today the area still supports around 50 people, who primarily live on the south side of I-40 and on outlying ranches.

The Catholic Church, which still stands on the south side of I-40, was built during World War I. Here, there is also one of the remaining schools, which was constructed sometime in the 1930s and closed around 1961. Other old residents and outbuildings also remain.

On the north side of I-40, where old Route 66 runs, there is an old abandoned gas station made from an old railroad car. Also here, is the falling down relic of the once-popular Baptist Church, along with a ghost farm and other abandoned buildings. The old combination post office/grocery store sits at the end of the road.

From Cuervo, the old Mother Road makes its way to Santa Rosa. Along this 17 mile stretch, keep your eyes open for the old Frontier Museum on the south side of I-40. This museum complex and western-themed tourist trap was open in the early 1950s for a short time. Here, children once rode horses, adults grabbed a beer, and the whole family sat down at the Frontier Cafe. Today only the faded remains, littered with debris, speak of the great old days on Route 66.