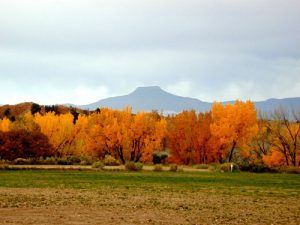 As you roll away from Santa Rosa, New Mexico continuing your journey westward on Route 66, look to the southwest for a 7,576 foot-high peak rising from the arid plains. The Cerro Pedernal Peak, meaning Flint Peak, is the site of numerous prehistoric flint mines and quarries. Here, the ancient peoples made tools and weapons from the material and traded with other Indian groups. Numerous artifacts have been found in the area, including tools and arrowheads. Stories of buried treasure and lost artifacts have caused the summit to be pitted with the excavations of hopeful fortune hunters. At the base of the peak is a natural spring that caused much disagreement for possession during the early days of cattlemen.

A Route 66 landmark since 1934, Cline’s Corners has been pumping gas and selling souvenirs for over 70 years. However, it hasn’t always been at the same place. In the beginning, Cline’s Corners was located in Lucy, New Mexico but, the location wasn’t good for owner Roy Cline.

Soon, he moved the station to Route 66, at the junction of Highway 6 and Highway 2. But then, in 1937, Route 66 was re-aligned north of his station, so Roy picked up and moved his building again. At its final resting place along the ever-popular Route 66, Cline’s Corners began to do a brisk business, and Cline convinced Rand McNally to put Clines Corners on their maps. For years, old-timers in the area laughed when they remembered that Cline sold gasoline for ten cents a gallon and water for a dollar a gallon. Water was scarce in the area in those days. 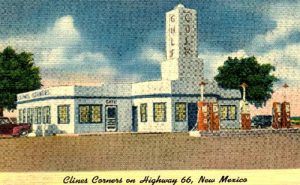 In 1939, Roy Cline sold Cline’s Corners to S. Lynn “Smitty” Smith and his wife, Helen. The Smiths expanded and added the distinctive neon sign, and the name continued to stay on the maps.

In the meantime, Roy Cline opened another business some 16 miles to the east of Cline’s Corners. In 1945, the Flying C Ranch opened, including a gas station, garage, and cafe, catering to Route 66 travelers.

Continuing to grow, Cline’s Corners added more and more employees, and homes were built for them, which continue to be used today. When Smitty died in 1961, the business changed hands again. A post office was added in 1964. Cline continued to run the Flying C Ranch until 1963, at which time it became Bowlin’s Flying C Ranch. Claude M. Bowlin started trading with American Indians in 1912. The family has since grown to 12 travel centers. 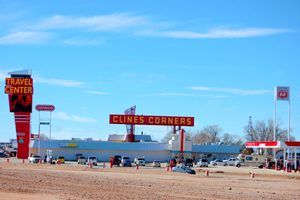 Today numerous people are working at Cline’s Corners who provide a rest stop for weary travelers in the same location as it has been for decades. It has expanded to over 30,000 square feet of retail and restaurant space, including a full-service restaurant and a fast food venue. The vast majority of the space is allocated to New Mexico’s largest Gift Shop, which provides southwestern, New Mexican, Route 66, Native American, and other souvenirs, where visitors are sure to find a rattlesnake ashtray, a beaded Indian belt, or a rubber tomahawk to remember their journey. Just outside the door on either side of the building, one can find two modern and nationally known brand Convenience Stores and Gas Stations providing both gas and diesel products.

Unfortunately, Clines Corners no longer provides the friendly young man who once filled up your tank with gasoline, washed your windows, and could fix a flat tire. Today, Clines Corners is decidedly like many other large travel centers that sit aside the nation’s many interstate highways.

Beyond Cline’s Corners, at exit 208, on the north side of I-40, was once an old settlement called Wagonwheel. Originally a stop for covered wagons, it, no doubt, could tell a story or two, but today, all that stands here are a few buildings and a towing company. 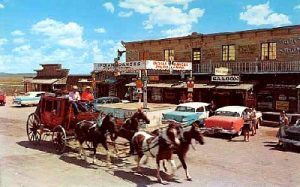 On US Highway 66. Postcard of the Longhorn Ranch in New Mexico

Another few more miles down the road, just at exit 203, are the ruins of the old Longhorn Ranch on the south side of I-40. Once a favorite old west stop along the Mother Road, the owner has long since razed the buildings. All that’s left of the once-popular tourist attraction is the faded and twisted sign and a pile of rubble. Nearby is a newer building that serves as a topless club, bar, and restaurant. Rumor has it that the owner of the old Longhorn Ranch razed what was left due to the club. The old Longhorn Ranch Motel appears to be undergoing renovation for the use of the club. 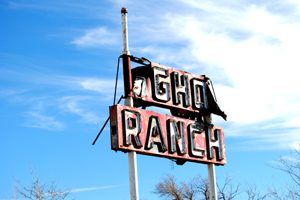 Continue your journey into Moriarty by taking the frontage road on the north side of I-40 at Exit 203. As you turn to the west, you’ll pass by the abandoned Zia RV Park and Campground. Though the sign is worn and faded, the campground has not been vacant for too many years, as it still appears on several campground websites.