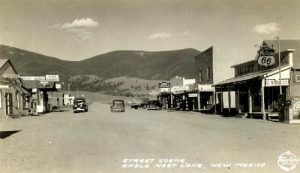 Eagle Nest, New Mexico is located in the Moreno Valley in the midst of the beautiful Sangre de Cristo Mountains in northeast New Mexico. Nestled between the state’s two highest peaks – Baldy Mountain (12,441 feet) and Wheeler Peak (13,161 feet), it sits at the junction of US Hwy 64 and State Hwy 38. High above sea level, at 8,300 feet, the village rests on the western slope of Baldy Mountain, an area rich in Gold Rush history.

Before the miners, the area was called home by the Ute and Jicarilla Apache Indians who roamed the area in search of game and golden feathers for ceremonial worship. When Elizabethtown, just 5 ½ miles north, was in its heyday, the Eagle Nest area was utilized mostly for ranching and farming. 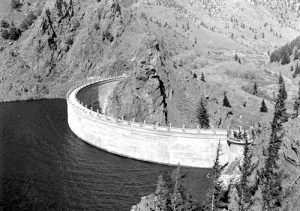 In 1873 Charles and Frank Springer founded the CS Ranch on the banks of the Cimarron River and in 1907 they applied for a permit to build the Eagle Nest Dam. It was almost 10 years before the Springers could hire the engineering firm of Bartlett and Ranney of San Antonio, Texas to design and build the dam. Finally, in 1916 construction on the dam was begun and was completed in 1918 to store the surplus waters of the Cimarron River for power plants, mining, and irrigation. Most of the labor for building the dam was provided by the Taos Pueblo Indians. The largest privately constructed dam in the United States, the concrete structure is 400 feet wide, stands 140 feet above the river bed, and is 9.5 feet thick at its crest and 45.2 feet thick at its base. Supposedly, eagles built nests on the sides of the new dam and that’s how it got its name. 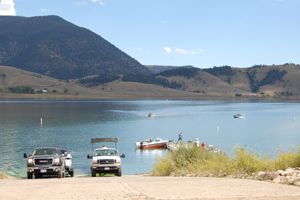 The dam created Eagle Nest Lake which varies between 1,500 and 3,000 surface acres, depending upon weather cycles. Surrounded by rolling pasture and stunning mountains, the fishermen began to arrive when the lake was stocked with trout. Along with the fishermen, entrepreneurs also arrived, building businesses and transforming the quiet farming community into a tourist mecca, providing entertainment to the visiting cowboys, fishermen and other tourists.

One of the biggest industries was cutting and selling ice from the lake. T.D. Neal hired men to drive out upon the lake and cut block ice that was stored in ice houses filled with sawdust. Jobs were scarce in the area and many families survived the winters by ice cutting and trapping.

In the 1920’s illegal gambling was introduced to the area. Eagle Nest became a popular spot along the road from Santa Fe to Raton where politicians and other travelers attended the horse races. A favorite stopover for the dignitaries, they were said to have caused quite a ruckus with their gambling, drinking and dancing. 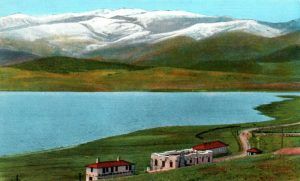 In 1927, Walter Gant, an oilman from Oklahoma hired a businessman by the name of William B. Tyer to oversee the construction of the grandest resort that Eagle Nest had ever seen — the Eagle Nest Lodge. Bill Tyer lived in a cabin on the Gant property and oversaw the many details of building the luxurious lodge. When it was completed, Bill Tyer stayed on to manage the Eagle Nest Lodge, which featured 12 rooms, a lounge, a restaurant, horseback riding, fishing, and hunting expeditions for the many travelers who stopped to enjoy its magnificent view of Eagle Nest Lake. Considered the finest lodge for miles, it soon expanded to include a guest annex that featured five studio units with their own bathrooms and kitchenettes. They also connected the main building to the Casa Loma via a walkway/lounge they called the Loafer’s Lounge.

The local saloons heartedly welcomed the travelers, rolling slot machines out upon the boardwalk early in the morning to entice the gamblers. Judge Neblett, for whom the Colin Neblett Wildlife Area is named, was a frequent visitor, as well as several governors. Though gambling was illegal, it was obviously overlooked by the politicians. In fact, it has been said by several of the locals, that when illegal gambling was first introduced to Eagle Nest in the 1920s, that the local Sheriff owned many of the slot machines in Eagle Nest, Red River, and Colfax County. However, since we first published this story in the summer of 2003, we have since heard from Jerry Ficklin, a local historian and writer, who once lived in Eagle Nest and spent many summers there between the years of 1945 and 1960, that this “tidbit” is nothing more than a legend with no documented support. 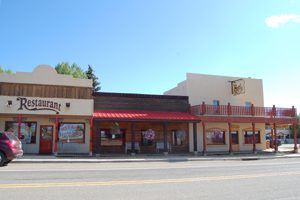 The El Monte Hotel (now the Laguna Vista), as well as Doughbelly’s Cafe (now the building that houses Julio’s,) and The Gold Pan were said to have offered roulette and gaming tables, as well as slot machines. Slot machines were also found in many of the stores.

Eagle Nest was in its heyday during the 1930s, with disputes often resulting in shots fired back and forth across Main Street. Reportedly one saloon owner, along the road that travels north from Eagle Nest to Idlewild, was known to provide free wine to those who came through its doors. The free pouring wine would inevitably lead to fights and discord among the rowdy customers, which the saloon “advertised” as free entertainment.

In the winter, the town was immobilized as the wind gusted across the lake, locking the inhabitants indoors. In the spring, the area would flood with fishermen anxious to test their rods in the lake. T.D. Neal started the annual Eagle Nest Fish Fry to promote the lake, which drew two to three thousand winter-weary souls from all over the region. In 1936, the cars were said to have been lined up for miles from the old Eagle Nest Lodge to the Cloverleaf Motel.

Gambling continued to thrive in the early 1940s. Unregulated, many locals tell stories that the games were rigged as local shills were called in to sit and play until enough “victims” arrived to fill the table. Some also say that the roulette tables were rigged, and the cards and dice marked. This too has been disputed by author/historian Jerry Ficklin, as he personally knew many of the owners and managers of the gaming establishments during the 1940s. Most likely, this is nothing more than idle gossip that has since become a “legend” over the many years that have passed. However, one interesting tidbit of information regarding the games of chance is in the case of a poker game, where the 700 acre Moreno Ranch was lost. In 1944, the ranch was purchased from the winner by the Deuel family. 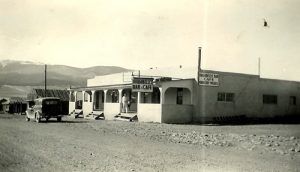 It was sometime during this period that the El Monte’s name was changed to the Laguna Vista Lodge and was operated by a couple named Gene and Pearl Wilson. At this time, the Wilsons often had to protect their gambling profits, when transporting them from the saloon to their living quarters, by arming themselves with guns.

By this time Doughbelly’s Cafe was owned by a man named Johnny Fincher, who continued to operate slot machines, dice tables and roulette in the establishment that he called the Eagle Nest Inn. This is the same building that now houses Julio’s. Down the street was the Eagle Nest Motor Court, with several adobe cabins and gas pumps sitting out front. While the cabins are still there today, called the Lucky Shoe Motel, the old fashioned gas pumps (seen below) are long gone.