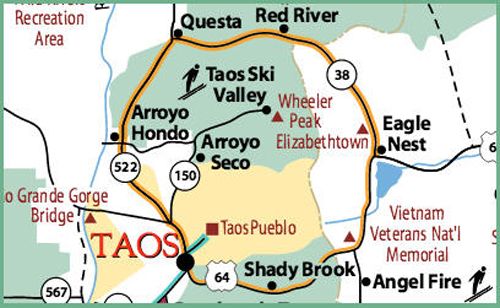 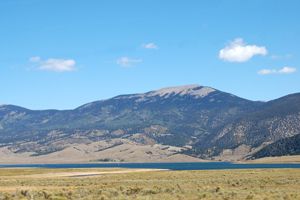 Eagle Nest Lake and Touch Me Not Mountain by Kathy Alexander.

From Eagle Nest, take US 64 southwest through the Moreno Valley, where you will likely see vast herds of Elk peacefully grazing on the plains. To the west, just before you get to the road to Angel Fire, you will see the Vietnam Veterans Memorial Chapel overlooking the southern end of the valley.

South of the chapel is the former town of Agua Fria, which was once home to a serial killer named Charles Kennedy. At the Palo Flechado Pass base, his home was a rest stop where he enticed travelers into his home, stole their valuables, then murdered and buried them under his house. When he was discovered, Kennedy was killed by a lynch mob led by Clay Allison. 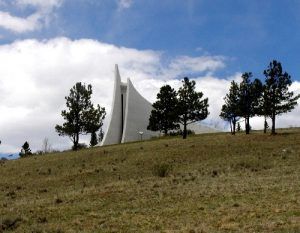 Just past the Vietnam Veterans Memorial, Highway 434 travels south from Highway 64 to the Village of Angel Fire and the Four Seasons Resort. A busy ski resort during the winter, it also offers an 18-hole golf course for summer guests and continues to operate its chairlift for hikers, mountain bikers, and sightseers during the summer. Another day trip presents itself here by continuing past the village of Angel Fire and on to Mora, New Mexico, on Highway 434. This history-filled adventure is not on the Enchanted Circle, but, it is a great adventure when you have the chance.

After returning to US 64 from Angel Fire, you will travel over the high 9,101-foot Palo Flechado Pass and down into the Rio Fernando de Taos Canyon. There are picnic areas, campsites, and many trails through the canyon. Taos Canyon is home to many artist studios open to visitors in much of the summer and fall seasons. As you begin the descend the mountain into the valley, the canyon provides a spectacular view of the sage-covered mesa and the distant San Juan at the southern end of Taos.

You can spend at least a whole day just in Taos, which provides visitors with a world of varied experiences. Visit Taos Pueblo, an ancient living Indian village that has stood unchanged for centuries. Or, explore historic Taos Plaza and its side streets. Many of the old adobe buildings that now house shops and galleries were once the homes of some of Taos’ leading citizens – Kit Carson, among them.

You can set off on a mountain trail on skis, horseback, bike, or on your own two feet. Or ride the bucking Rio Grande in a raft or kayak. With four seasons and five life zones, your recreational options are wide open. The Native American, Spanish, and Anglo cultures are proudly preserved through art and architecture, music and dance, and food and festivals to enjoy throughout the year.

Traveling north from Taos, the highway crosses the great alluvial apron at the base of the Sangre de Cristo Mountains, which rises 5,600 feet above the volcanic plateau. Stretching north into Colorado, the Sangre de Cristos, Spanish for the blood of Christ, are one of the youngest mountain ranges in America.

The Río Grande Gorge is a short drive west on U.S. 64 but well worth the side trip. The Río Grande River passes some 650 feet below the highway. Pedestrian walkways on either side of the bridge allow you to look directly down into the yawning chasm. 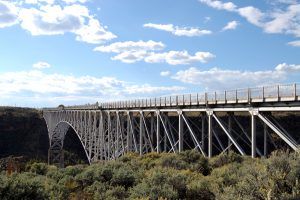 Many other interesting diversions are available on this northward leg of the Enchanted Circle. Taking a left in the lush Hondo Valley at the small village of Arroyo Hondo will take you to the John Dunn Bridge across the Río Grande River at the base of the gorge. John Dunn was an early settler who made his fortune by purchasing a bridge near this spot, turning it into a toll bridge, where all passengers from the Denver and Río Grande Railroad had to cross to get to and from Taos. Dunn realized a handsome return on his original $5,000 investment.

Businessman John Dunn also ran a stagecoach and ore wagon service to many towns in the Enchanted Circle and beyond to Ute Park (located between Eagle Nest and Cimarron, New Mexico, on Highway 64), where travelers and freight could catch trains east. The road to the John Dunn bridge wanders beside the Hondo River, a favorite of fly fishermen. On the western side of the Río Grande, to the right is a favorite swimming spot and to the left and up the hill is the entry to the trail to Black Rock Hot Springs. 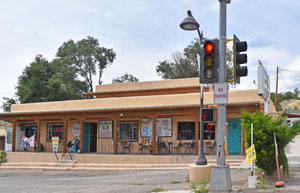 Continuing toward Questa is the D. H. Lawrence Memorial and the towns of Lama and San Cristobal. The scar of the Hondo Fire of 1996 marks the Sangre de Cristos north of Lama.

A stop at the New Mexico Fish and Game’s Red River Fish Hatchery is a must. On the west side of the highway, just south of the Village of Questa, it provides free self-guided tours, picnic facilities, and good fishing on the Red River just below the trout breeding ponds.

At the end of the Camino Real, Questa is known for its local woodworkers, tinsmiths, and other traditional artists and artisans. The San Antonio del Río Colorado Church, renamed St. Anthony’s, was founded in 1842 and displayed many fine examples of traditional Santos (carved or painted images of saints)  and retablos (devotional paintings for displays.)  Artesanos de Questa continues these cultural traditions and has a gallery shop on Highway 38.

The Village of Questa was formerly named Cuesta, which means “the lowering.” It was named this by early Spanish settlers because of its location in a mineral-rich caldera formed 25 million years ago. The town is ringed by several steep-sided volcanoes and offers views of many near-perfect volcanic cones, including Ute Peak and Ortiz and San Antonio Mountains to the north and west. Questa has a couple of excellent cafes that serve traditional Mexican cuisine, some with great green chile. 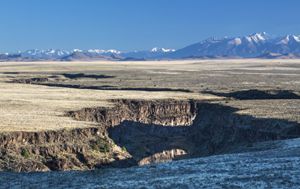 The Enchanted Circle continues east from Questa, but just 11 miles north at the town of Cerro is the entry to the Wild Rivers Recreation Area. You may want to devote an entire day to this Bureau of Land Management park, situated at the conjunction of the Río Grande and the Red Rivers and offers guided and self-guided walks to the bottom of the gorge. Picnic and campsites are available both on the rim and beside the Río Grande.

Continuing, the road runs through the narrow valley of the Red River. The mountains to either side are volcanic and a composite of ash and granite intrusions. The area was the scene of feverish prospecting at the end of the 1800s and the beginning of the 1900s. Miners found gold, silver, copper, and lead deposited by the many volcanic eruptions in the Tertiary era. It was hard rock mining and was soon abandoned because of difficulties extracting the minerals from it. Only the molybdenum mine is still operated sporadically. Several camps and picnic grounds border the Red River. 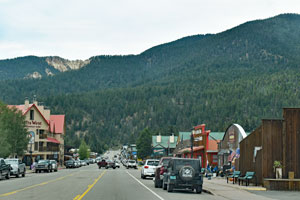 The Town of Red River offers a chance to stretch your legs and shopping skills. This family-oriented town with an Old West feel has saloons, daily staged gunfights, a 20-year-old melodrama at the Red River Inn, a fine mining museum, and all the souvenir shops you ever wanted.

The Red River Ski Area in the center of town operates its main ski lift during the summer and fall months. The 10,250 top gives the sightseer a view of the entire valley and hikers access to several easy to challenging trails dotted with old mining camps.

Continuing east on Highway 38, the road tops 9,820-foot Bobcat Pass and then twists its way down into the Moreno Valley. The pass offers some of the best scenery on the trip, including a vista of the north face of Wheeler Peak. Several turnouts allow photographers to record their passage for friends back home. 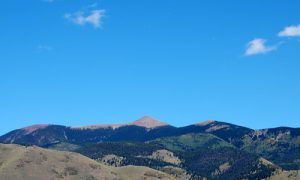 On the eastern rim of Moreno Valley, Mt. Baldy dominates the horizon. Gold was discovered on its slopes in 1866, and the gold rush was on. To the west of the highway, Elizabethtown built up quickly to accommodate the rush of miners and was dubbed “E-Town” by the locals.

Elizabethtown has long since become a ghost town; however, at one time, it was the county seat of Colfax County and the largest settlement in Northern New Mexico.

Early settlers and miners were “squatters” because everything that could be seen for miles was part of the Maxwell Land Grant, the largest ever recognized by the United States government. 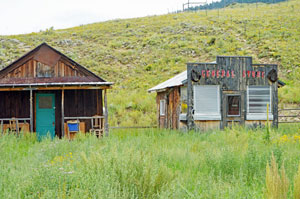 Elizabethtown quickly became the epitome of the Wild West, complete with range wars, lynchings, claim jumping, and land scams, and was ripe for such characters as Black Jack Ketchum and Clay Allison.

Later, when a European company purchased Maxwell’s Land Grant, they tried to sell “St. Louis of the Southwest” parcels to easterners, picturing a Mississippi-style paddleboat on the tiny Cimarron River. Today, just a few original buildings are remaining.

Return to Eagle Nest by continuing on Highway 38. 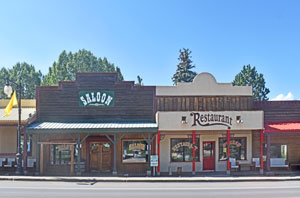