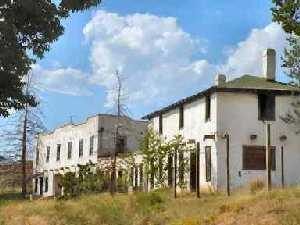 Perhaps it’s a mystery, or perhaps not, but, this old lodge certainly became an enigma to me on my July, 2003 visit to the Moreno Valley. Since I was a child in the 60’s and visiting the valley every summer, I’ve always wondered about this old place. Finally, I decided to find out more about it. Or, I should say, “tried to find out more about it.”

The locals say that the Eagle Nest Lodge, just outside of Eagle Nest, NM,  caught fire about twenty years ago and closed, and that’s about all they say. “Was it closed before that?”, I ask, only to be answered by shrugs and blank stares.

There’s no doubt that the old hotel caught fire, because there are obvious signs of fire damage in two different locations at the old lodge. But, the question remains — when?

And, was the fire the cause of the closing? At least one person told me that a later fire was started in a second location, probably by vagrants living in the old lodge. But, still neither fire has succeeded in demolishing this once wonderful luxury resort. 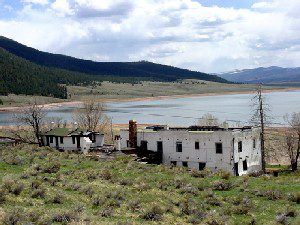 I was getting confused by what little information I could extract. When I was visiting the valley every summer more than thirty years ago, the old lodge was already closed and has remained so on my many subsequent trips to the valley. I still wanted to know why this once beautiful hotel, with its awesome view of the lake, was left lonely, abandoned and forgotten.

You can see by the interior pictures and the many outbuildings that the lodge must have been splendid in its day, offering a variety of services. Inside you can see the restaurant, the Loafer’s Lounge, several fireplaces, including one that’s three-sided, in yet, another lounge.

Just outside the front door, the lake beckoned the guests for fishing and boating, and to the right, are the remains of a man-made pool and a garden, as well as what appears to be stables. Several outbuildings are housed on the property, including private cabins and a caretaker’s home.

So, what happened to this place? For two weeks I asked virtually every person I met, including a local newspaper writer, without success. Finally, I was directed to a life-time resident of the valley. Though very friendly and forth-coming, he could only say “Both my mother and my aunt worked there, and they won’t even talk to me about it.”

In the summer of 2004, I asked around again and received the same looks of bewilderment. However, at least one person from Angel Fire speculated that the place had become somewhat of a speakeasy with all manner of vices including gambling and prostitution and that was the reason the locals were reluctant to talk about it. However, this is just rumor and speculation with no basis in fact from anyone associated with the old lodge.

The Loafers Lounge (the name appears on the other side of the double doors) looks as though it was a very pleasant place to relax after a busy fishing day. Photo by David Alexander, May, 2004 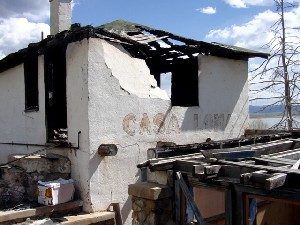 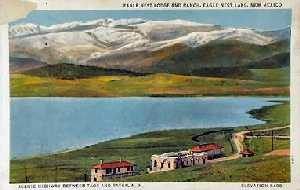 One day while Ann Tyer Walker, from Santa Rosa,California, was browsing the internet in 2004, she stumbled across our story and began to unlock the mystery of the Eagle Nest Lodge. Ann is the daughter of the man who built and ran the lodge for almost two decades. Ann, who only lived at the lodge until the age of two, gave us what little information that she knew, while her husband Doug scanned and sent us dozens of photographs. Then the real sleuthing began. Ann followed up with her cousin Shelton Tyer, Jr. from Ardmore, Oklahoma who actually worked at the old lodge in the 1930s. Now, at the age of 86, Shelton remembers the hard work his Uncle Bill made him do while at the Eagle Nest Lodge.

In July, 2005, we heard directly from the Evelyn Gant, Walter Gant’s daughter-in-law, as well as Dale Gant, the grandson of Walter Gant. Now the facts are completely in and the mystery is solved.

It all began with a gentleman by the name of Walter Gant, an oil man from Oklahoma. Walter Gant owned the property on the lake and had been involved with Ann’s father, William B. “Bill” Tyer, from Ardmore, Oklahoma in other business ventures. When Gant decided to build the lodge on the prime real estate overlooking the lake, he hired Ann’s father to oversee the building and running of the business.

10 thoughts on “The Mystery of Eagle Nest Lodge”