An extremely “young” village for New Mexico and the northeastern part of the state, Angel Fire was only a concept until the 1960s, when landowners envisioned a “resort” area complete with fishing, hunting, skiing, and more. Before that time, it was comprised of rolling hills, high mountains, lush valleys, streams, and just a few owners over the years.

Long before white settlers came to the area, the Moreno Valley was called home to the nomadic Moache Ute and Jicarilla Apache tribes that gathered here in the summer and fall. According to legend, the Ute called the glow against Agua Fria Peak the “fire of the gods.”

When traveling Franciscan friars came through the area, they transposed the name into “the place of the fire of angels.”  The mid-1800s would see the arrival of Lucien B. Maxwell, the largest land grant owner in U.S. history, and frontiersman Christopher “Kit” Carson, who would soon coin the phrase “Angel Fire” in 1845. 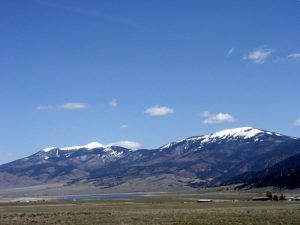 In 1864 Lucien B. Maxwell acquired the full rights to the 1.7 million-acre property, known as the Maxwell Land Grant, which was only pasture and hunting ground for the Indians. In 1867, however, everything changed when gold was discovered on Baldy Mountain, overlooking the Moreno Valley, and within a year, 7000 fortune hunters flooded the area. Though the land was privately owned by Maxwell, there was no stopping the prospectors who soon established the ghost town of Elizabethtown. More familiarly called E-Town by the locals, this mining camp was typical of other rowdy mining camps. It became one of the principal towns involved in the decades-long Colfax County War between landowners and squatters.

Surrounded by rolling pasture and stunning mountains, the fishermen began to arrive when the lake was stocked with trout. Along with the fishermen, entrepreneurs also arrived, building businesses and transforming the quiet farming community into a small tourist mecca, providing entertainment to the visiting cowboys, fishermen, and other tourists. At first, the small settlement was called Therma, but later it changed its name to Eagle Nest. 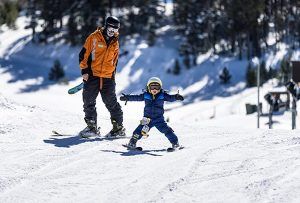 In 1954, Roy and George Lebus of Wichita Falls, Texas, bought the 9,000-acre Monte Verde Ranch and in 1956, purchased another 14,000 acres, comprising the Cieneguilla Ranch, from the Maxwell Land Grant Company. Ten years after the initial purchase, they decided to develop the property into a resort community. They called the new development “Angel Fire,” the phrase that Kit Carson had long ago coined after the old Indian lore. In 1966, construction began in earnest, and after about 18 months, the early ski trails were cut, a nine-hole golf course was complete, and Monte Verde Lake was ready for visitors. Word of the resort spread quickly, and soon visitors from New Mexico, Oklahoma, Texas, and Kansas began to come to Angel Fire. As the resort continued to grow, the demand for new capital for expansion was required. The Lebus family took on additional investors in 1969, beginning to back out of active ownership. 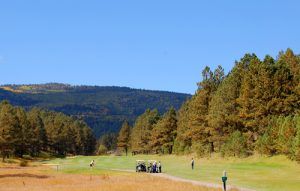 In no time at all, new accommodations were needed to house these many visitors, and the first condominiums were completed in 1971. In 1972 the resort was sold to the Baca Grande Angel Fire Corporation. However, the Lebus family retained more than 1000 acres of their original land. The Baca Grande Corporation began to install utilities to lot sites, built new roads, and cleared the ski trails of numerous rocks and trees. By 1973, Angel Fire was visited by more than 20,000 skiers. In the same year, the Country Club and Starfire Lodge were added.

Over the next several decades, the resort was sold numerous times, struggling through the recession of the 1980s, becoming involved in endless legal battles, and finally winding up in bankruptcy. 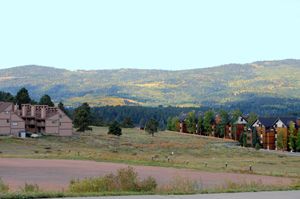 Angel Fire is located in the majestic Moreno Valley in Colfax County, New Mexico, 23 miles east of Taos via US Hwy 64 and 152 miles northeast of Albuquerque. The Moreno Valley is a 15-mile long, three miles wide, high alpine valley with an 8,382′ base elevation. Surrounding mountains range from 11,086 foot Agua Fria Peak on the south end of the valley to 12,441 foot Baldy Peak at the north end of the valley. Wheeler Peak, at 13,161 feet, is the highest mountain in the state and forms the northwest boundary of the valley.

Editor’s Note:  I spent much time in this area while growing up — Grandma Foster had a cabin near Eagle Nest. At the age of seven, I watched the ski resort being built. At the age of ten, I learned to ski there. Wonderful memories. p.s. The family still owns the cabin. — Kathy Alexander 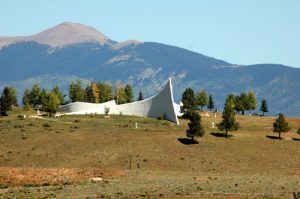 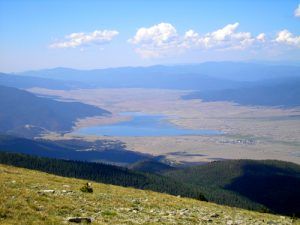