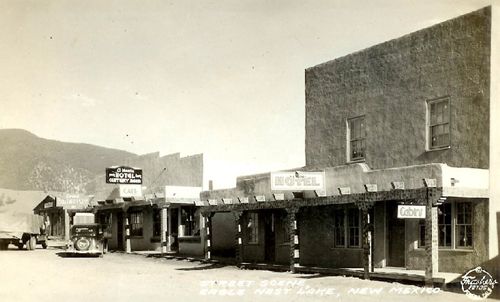 Locals call the Laguna Vista Saloon, in Eagle Nest, New Mexico, built in 1898, the “Guney”. The El Monte, as it was originally called, was allegedly built with stolen railroad ties, which are still visible in some of the rooms. A would-be innkeeper transported the petrified railroad ties from Ute Park to Elizabethtown for two summers, but when he returned after the winter, the railroad ties were missing and a new hotel had been built in Therma, which later changed its name to Eagle Nest. Behind the original saloon were a 17-foot deep hand-dug well and several icehouses.

The El Monte was one of the busiest saloons in the 1920s and 30’s when the politicians stopped over on their way to the horse races in Raton, New Mexico to partake of the many roulette, gaming tables, and slot machines offered in the saloons, inns, and businesses of Eagle Nest.

It was sometime during this period that the El Monte’s name was changed to the Laguna Vista Lodge and was operated by a couple named Gene and Pearl Wilson. At this time, the Wilson’s often had to protect their gambling profits when transporting them from the saloon to their living quarters, by arming themselves with guns. 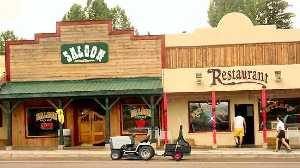 In the early 1950s, Bob and Edith Sullivan purchased the property from the Wilson’s, leasing the restaurant to Walter Ragsdales, who operated it for several years. As Eagle Nest Lake’s popularity began to grow with the tourists, the Sullivan’s advertised for college girls to help staff the lodge, restaurant, and saloon, as the small village of Eagle Nest could not provide the staffing needed for the popular tourist destination*. In 1964, the “new” hotel was built next to the original hotel for additional guests.

In 1971, Bert Clemens bought the property from the Sullivan’s and continues to operate it to this day. Bob and Edith Sullivan’s son, Robert, stayed on in Eagle Nest for many years and was honored for his 25+ years as fire chief, councilor, and mayor. Edith Sullivan, who operated the Laguna Vista for some twenty years, was honored as the Grand Marshall of the July 4th parade in 2003. Unfortunately, Mrs. Sullivan passed away on May 19, 2004.

So, does this old hotel and saloon have ghostly visitors similar to those at the St James Hotel in Cimarron, New Mexico, just a few miles down the road? Mr. Clemens says “yes,” though he has never personally encountered them. At one point, a psychic visited the property who counted at least 22 spirits lingering around the place. One employee reported to Mr. Clemens, that while she was in the kitchen she heard the vacuum running in the dining room, but when she went to investigate no one was there and the vacuum was sitting still and silent. 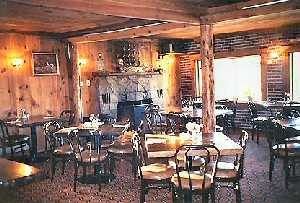 A former manager, Jim, also told us that eerie things happen, such as the piano in the dining room sometimes plays when no one is there, and a dining table chair is pulled up next to the piano. The staff will replace the chair next to one of the dining tables only to find it later back in front of the piano again.

Customers and staff have reported that a woman in dance-hall dress often appears, then vanishes toward the site of the hidden staircase. This spirit is said be that of a woman on her honeymoon with her husband, enjoying a stay at the hotel. Her husband ventured out one day to go hunting and never returned. The distraught young woman was left stuck and destitute and was said to have become a saloon girl in order to provide for herself. Supposedly, it is her spirit that lingers at the hotel in search of her long lost husband.

In talking with a former employee of the Laguna Vista, Kristi Dukes, who was a cook in the restaurant in 1999, she stated that she encountered several spooky visits from a spirit that is said to have once been a saloon girl in the old lodge. According to Kristi, both her and her mother Jane, who also worked in the restaurant, would often encounter these visits whenever the music they were listening to in the kitchen was anything other than classic rock or country music.  When Kristi, who often liked to listen to Rap, would change the music, strange things would occur.  On one such occasion, a marble rolling pin was thrown at Kristi, on other occasions pots and pans would fall off of the walls.  Once, when odd things were happening, Jane asked Kristi to turn off the music but when she switched the stereo to the “off” position, the music continued to play.  She then unplugged the stereo and, though it had no batteries, the music played on.  Frightened, the two left at the end of the evening only to return the following day to a silent stereo.

The spookiest story actually occurred when Kristi brought her daughter Rayni, who was 2 years old at the time, to work one day.  She had placed little jingle bells on her daughter’s shoes so that she could keep track of her while she was working.  Suddenly, Rayni walked into the kitchen very gently and slowly.  Kristi said she looked very odd and when she asked Rayni what was wrong,  Rayni replied, “the lady told me to stop making noise”.  When Kristi asked Rayni where the lady was, Rayni led her mother into the dining room and pointed at “someone” saying “that lady.”  Kristi saw no one but Rayni insisted that her mother remove the bells from her shoes.

Today, the Frommer’s Travel Guide rates the Laguna Vista, as the best restaurant and hotel in the valley, and in January 2002, the restaurant and Lodge were featured in Sunset Magazine. The Lodge and restaurant have been featured on the Late Show with David Letterman around 2005, and more recently on the Travel Channel’s Resort Rescue.

Another spirit is said to reside at Julio’s across the street.  Now a restaurant, Julio’s was once another popular gambling spot in Early Eagle Nest days. Supposedly, a woman resided next door to Julio’s who was said to dislike men.  Stories abound about pots and pans being thrown about in the restaurant and items are often moved from one place to another. Men appear to be her favorite target, as she plays pranks on many of them that come through what was once her front door. 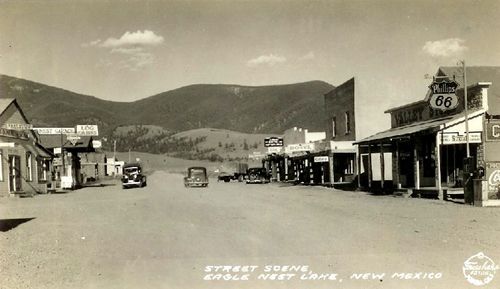