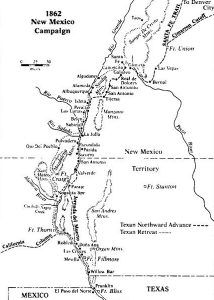 President Davis agreed to the plan and gave Sibley a brigadier general’s commission.

Leading more than 2,000 troops, Sibley left San Antonio, Texas in November 1861, stopping in El Paso to recruit more soldiers. They then marched onward to Mesilla, the Confederate Capitol of Arizona Territory. On December 20, 1861, now in command of the Army of New Mexico, issued a proclamation taking possession of New Mexico in the name of the Confederate States. He called on the citizens to abandon their allegiance to the Union and to join the Confederacy, warning that those “who co-operate with the enemy will be treated accordingly, and must be prepared to share their fate.”

In February 1862, Sibley led his men northward up the Rio Grande Valley toward the territorial capital of Santa Fe and the storehouses at Fort Union. Along the way, Sibley’s first objective was to capture Fort Craig, New Mexico.

Making their way across and up the east side of the Rio Grande to the ford at Valverde, north of Fort Craig, the Confederates hoped to cut Federal communications between the fort and military headquarters in Santa Fe. However, on February 20, 1862, some 3,000 men led by Union Colonel Edward Richard Sprigg Canby left Fort Craig to prevent some 2,500 Confederates from crossing the river. When he was opposite them, across the river, Canby opened fire and sent the Union Cavalry over, forcing the Rebels back. The Confederates halted their retirement at the Old Rio Grande riverbed, which served as an excellent position. After crossing all his men, Canby decided that a frontal assault would fail and deployed his force to assault and turn the Confederate left flank. Before he could do so, though, the Rebels attacked. The Union forces were able to rebuff a cavalry charge, but the main Confederate force made a frontal attack, capturing six artillery pieces, forcing the Union battle line to break, and causing many of the Federal troops to flee. Canby then ordered a retreat. 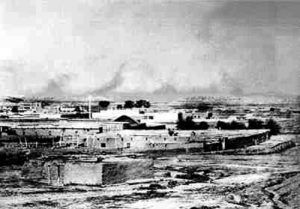 In the meantime, more Confederate reinforcements arrived and Sibley was about to order another attack. After battling for two days, Canby asked for a truce, by a white flag, to remove the bodies of the dead and wounded. Left in possession of the battlefield, the Confederates claimed victory but, they had suffered heavy casualties, an estimated 187. The Union also suffered an estimated 202 casualties.

Although a Confederate victory, Sibley determined he had lost too many men and supplies to take Fort Craig itself and went north around the post to head to Albuquerque, where the Federals had stored $250,000 worth of goods. Starting out from Valverde on February 23rd, they reached Albuquerque on March 2nd and attacked. However, no battle ensued, as the defenders were gone, as well as the supplies.

The Confederate troops advanced slowly through the imposing peaks and buttes of the Jémez and Sangre de Cristo mountains toward Santa Fe. However, their progress was very slow due to the loss of many horses at Valverde, requiring many of the soldiers to march. They also had lost much of their transportation in the Battle of Valverde, causing them to carry the wounded. Though slow, they continued northwestward, finally reaching Santa Fe on March 13th.

Sibley detached 600 men to plunder the city, but, once again, they found no federal ammunition or supplies. Sibley’s men then headed to Fort Union, some 90 miles to the northeast of Santa Fe.

In the meantime, the Confederates slow advancement allowed reinforcements from Colorado, under the command of Colonel John Slough, to reach Fort Union,  Being the senior officer at the fort, Slough took command, reporting to Colonel Edward Canby at Fort Craig. Canby instructed Slough to “harass the enemy by partisan operations, obstruct his movements and cut off his supplies.” Slough interpreted this as an authorization to advance. He soon gathered 1,342 men from Fort Union and began the trek to Santa Fe.