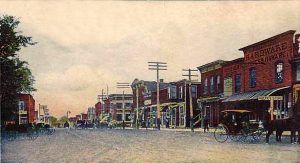 On a quiet residential street in the small town of Villisca, Iowa, a horrible tragedy occurred a century ago that continues to leave its effects on this small town. The walls of this pristine home still protect the identity of a murderer who bludgeoned to death the entire family of Josiah Moore and two overnight guests on June 10,1912. What’s more, not only do her walls hold the secret of the killer these many years later, they also continue to house a number of paranormal entities.

Nestled in the hills of southwest Iowa, Villisca is a small rural community of about 1,300 people today; but, in the early 1900’s, it was a bustling railroad town with about 2,500 people.

At that time, more than two dozen passenger and freight trains stopped at the depot each day and the town sported several hotels, restaurants, stores, theaters, and manufacturers. Within this thriving environment lived Josiah B. Moore, one of Villisca’s most prominent businessmen. The owner and operator of the Moore Implement Company (a John Deere Company franchise), he was a solid competitor with other area businesses. On December 6, 1899, Josiah married Sarah Montgomery at the home of her parents and the couple would have four children – Herman, Katherine, Boyd and Paul. 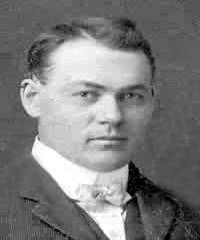 “J.B.”, as Josiah was familiarly called, and his wife, Sarah, were well-liked in the community, active in Presbyterian Church, and described as being friendly and helpful to their neighbors. On Sunday, June 9, 1912, the Moore family as well as the Stillinger family attended church. An annual event was also held Sunday evening called the “Children’s Day Program,” which had been coordinated by Sarah Moore. That evening, 9 year-old Katherine Moore invited her friends, 12 year-old Lena Stillinger, and her sister, 7 year-old Ina May for a sleepover. The girls accepted and the after the program ended at 9:30 pm, the Moore family, along with the Stillinger sisters, walked home from the church, arriving about 9:45 and 10:00 pm.

The next morning, Moore’s neighbor, Mary Peckham, noticed that the Moores were not outside taking care of their regular chores and that the house was unusually still. Between 7:00 and 8:00 am, she knocked on the door but, received no answer. When she tried to open the door, she found it locked. Concerned, she called Josiah’s brother, Ross Moore. When Ross Moore arrived, he knocked loudly on the door and shouted, attempting to raise someone inside the house. He then tried to look through the windows but found all of the curtains drawn or the windows covered. He then produced his keys and entered the house, quickly returning to the front porch and instructing Mary Peckham to call the sheriff.

What he had seen was shocking. The entire Joshiah Moore family had been murdered, as well as the two young overnight guests – all bludgeoned with an axe while they slept. In the upstairs master bedroom lay 43 year-old Josiah Moore and 39 year-old Sara Moore, both bludgeoned in the head, their bed linens stained heavily with blood. In the adjacent upstairs bedrooms, were the Moore children, 11 year-old Herman, 10 year-old Mary Katherine, 7 year-old Boyd, and 5 year-old Paul, who had also been bludgeoned in the head while they slept. In the main level guest room, the bodies of Lena Stillinger, age 12 and her sister Ina, age 8, were also found dead, killed in the same manner as the family. 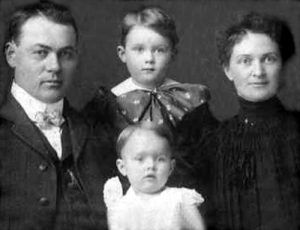 Josiah Moore family about 1904, before the two younger boys were born.

Villisca City Marshall Hank Horton arrived quickly, soon followed by other officers. In the meantime, the gruesome news spread like wild fire and within no time, neighbors and curious onlookers converged on the house. Law enforcement quickly lost control of the crime scene and it is said that as many as a hundred gawkers traipsed through the house before the Villisca National Guard arrived around noon and cordoned off the home.

The investigation tells that the eight victims were killed shortly after midnight, and all but Lena Stillinger were thought to have been asleep at the time of their murders. It was concluded that Lena was the only victim that had attempted to fight off her attacker, as she appeared to have had a defensive wound on her arm. The attack was so vicious that the ceilings in the parents’ and childrens’ bedrooms showed gouge marks apparently made by the upswing of the axe.

The axe was found in the guest bedroom, indicating that the Stillinger girls were the last to be killed. It was bloody but, an attempt had been made to wipe it off. The axe belonged to Josiah Moore. All of the curtains in the house had been drawn. Two windows that didn’t have curtains had been covered with clothing.

All of the victims faces were covered with bed linens or clothing after they were killed. Other evidence showed that a pan of bloody water was discovered on the kitchen table as well as a plate of uneaten food.

No one could imagine who could possibly commit such a heinous crime and the townsfolk were first convinced it must be a deranged tramp. Expecting to find the blood-drenched killer hiding somewhere in the area, a number of posses were formed on horseback and in autos, searching alleys in the city and every barn, shed, and outhouse in the vicinity. But, they returned empty-handed.

With darkness came the fear that a madman was on the loose and might strike again. Families partnered with their neighbors to stand shotgun guard all night and windows were nailed shut. In the ensuing days, every lock in town was sold out, residents openly carried weapons, neighbors looked with suspicion upon neighbors, and rumors and accusations ran rampant. Soon, newspaper reporters and private detectives flooded the streets. Bloodhounds were brought in and law enforcement agencies from neighboring counties and states joined forces. The murders began a chain of events that split the small town and forever changed the course of the lives of its residents. 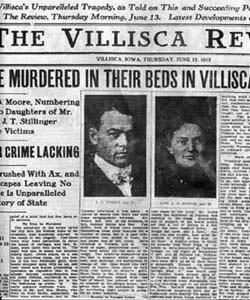 One of the earliest thoughts by investigators was the possibility of a serial killer. The previous year, a series of horrible murders had taken place in the Midwest. In the fall of 1911, every two weeks whole families had been slaughtered in their beds without apparent reason. These included the families of the Burnhams and the Waynes in Colorado Springs in September, the killing of a family in Monmouth, Illinois two weeks later, a culminated in the murder of the Showman family in Ellsworth, Kansas on October 15, 1911. The next year, another similar murder occurred in Paola, Kansas on June 5, 1912, just four days before Villisca. Though there were similarities in these gruesome killings, interest in the serial killer theory soon faded and was largely forgotten.

Every stranger or transient to the small town were also suspects. One such man was Andy Sawyer. A transient that moved from job to job, he gained temporary work for the Burlington Railroad on the very morning of the murder. According to the rail crew,  he purchased a newspaper which headlined the murders and w “was much interested in it.” The crew also complained that Sawyer slept with his clothes on with an axe close by and was a loner. Afterwards, he talked much about the Villisca murders and whether or not a killer had been apprehended. He also told the crew foreman that he had been in Villisca that Sunday night and was afraid he may be a suspect which was why he left.

The crews foreman, Thomas Dyer, was suspicious and turned him over to the sheriff on June 18, 1912. The foreman would later testify that before he turned Sawyer over to authorities, that he walked up behind him and Sawyer was rubbing his head with both hands, then all of the sudden jumped up and said to himself “I will cut your god damn heads off,” while making striking motions with his axe and hitting the piles in front of him.

Though Sawyer’s name often came up often in Grand Jury testimonies, he was eventually dismissed as it was found that he was actually in Osceola, Iowa on the night of the murder. The alibi was extremely tight as he had been arrested for vagrancy at 11:00 pm that evening.

1 thought on “Villisca, Iowa and the Axe-Murder Man”