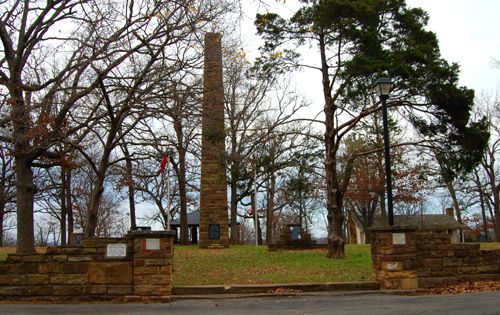 As the sun set on December 7, 1862, at Prairie Grove, Arkansas, the rattle of musketry and the boom of cannon came to an end. The Confederate Army of the Trans-Mississippi Theater and the Union Army of the Frontier suffered about 2,700 casualties during the one-day battle. While the armies departed and the Civil War ended in 1865, the wooded ridge overlooking the Illinois River was changed forever. After the war, people moved into the area and established the town of Prairie Grove in 1888, and old soldiers held reunions near the town for several years.

In 1908, the Prairie Grove Chapter of the United Daughters of the Confederacy purchased about nine acres from Kibble Carr Cummings to establish a park for the veterans.

Within a year, the Confederate Veteran magazine reported the new park would be “…a consummation, an attraction, a hallowed spot like unto none in our Western Southland.”

The annual events at the park featured political speeches, dinners on the grounds, foot races, and carnival games, as well as providing a place for the aging veterans to reunite and reminisce. Following World War I, the reunions included the veterans of that conflict, too. Four thousand people attended the 1918 reunion featuring, among other things, an airplane flight. By 1922, there was a baseball game, vaudeville and wild west show, and a parade. Even during the Great Depression, the reunions continued with the last surviving Confederate veterans in the area attending the 1938 event. Despite the lack of veterans, the 1940 reunion included politicians, the acrobatic team of “Riggs and Riggs,” and an Old Fiddler’s Contest.

The December 7 Japanese attack on Pearl Harbor on the already memorable date to the people of Prairie Grove ended the reunions for the duration of the war. It also sent the park into a period of stagnation with few efforts to maintain the grounds.

Local citizens, however, renewed their efforts to improve the park during the 1950s. The Prairie Grove Lions Club made it a priority to care for the hallowed battle site. Other individuals asked the State of Arkansas to provide funds for the park. The effort resulted in the passage of Senate Bill 278 in 1957, creating a Prairie Grove Battlefield Park Commission and appropriating $50,000 for development. This money and future funding enabled the Commission to purchase additional acreage and move several historic structures to the park, including the Morrow and Latta houses. 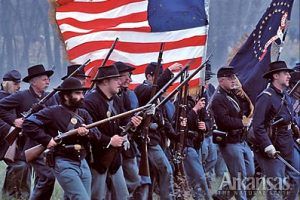 During the centennial anniversary of the battle in 1962, many citizens, including the commissioners, urged the state to make Prairie Grove Battlefield Park a state park, but several years passed before that dream became reality. Meanwhile, the volunteer spirit continued unabated at the park. A donation of $100,000 was bequeathed from the estate of Biscoe Hindman, son of Major General Thomas C. Hindman, who commanded the Confederate Army at Prairie Grove. Architect Kenneth Cockram designed Hindman Hall and used the gift for the construction budget. The Commission dedicated the impressive structure in 1965.

Finally made a state park in 1971, Prairie Grove Battlefield Historic State Park continued to improve with the 1980 addition of the Borden House property, where some of the heaviest fighting occurred. This acquisition brought the park’s total acreage to 130, which remained until a new effort to expand the park began in 1992. The American Battlefield Protection Program prepared a Battlefield Protection Plan for Prairie Grove that year with Arkansas State Parks. The result was that a mixture of State, Federal and private funds were used to purchase more of the Civil War site. Today, the park includes about 750 acres of battlefield.

As was true in the years immediately following 1862, Prairie Grove today draws people for a variety of reasons. Some come to exercise, picnic, attend family reunions or for special park events such as the Memorial Day Tribute, the Clothesline Fair, or the Battle Reenactment held in December of even-numbered years. Of course, many learn more about the history of the Civil War and the battle that occurred here through guided tours or interpretive exhibits in Hindman Hall or by wayside panels along the walking trail or six-mile driving tour.

For many, though, it remains a place of reflection. A place where one can physically connect with the events of America’s greatest and most influential conflict, the Civil War. Arkansas’ 27th state park, Prairie Grove Battlefield, commemorates a Civil War battle where, in one day, Union and Confederate forces suffered about 2,700 casualties. The park, located about 10 miles west of Fayetteville on U.S. 62, features a Battlefield Museum, interpretive exhibits and programs, guided tours, a walking trail, a driving tour, picnic sites, and more. 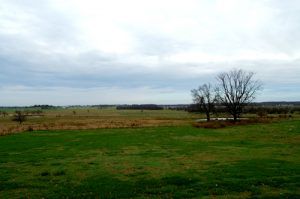 Compiled and edited by Kathy Alexander/Legends of America, updated August 2022.