Mary Warren (1671?-??) – Born twenty-one years before the Salem Witch Trials began, Mary Warren was the oldest of the “afflicted girls” and became one of the most rigorous accusers. She also became a defender and confessor, a unique role among the accusing girls of Salem Village. See more HERE. 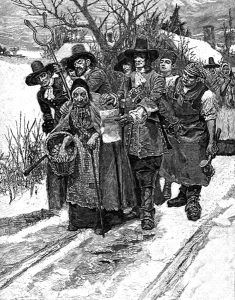 Sarah Averill Wildes (1627-1692) – Having a magistrate for a husband did not prevent Sarah from being tried, convicted and executed for witchcraft in Salem, Massachusetts. Sarah was born to William Averill and Abigail Hynton Averill in Chipping, Norton, England. Somewhere along the line, the family immigrated America. At the age of 36, Sarah would marry John Wildes on November 23, 1663, in Topsfield, Massachusetts. The couple would have just one child. John had previously been married to Priscilla Gould Wildes, they had nine children, and Priscilla had died just months before, in April 1663.

John Wildes quick marriage following the death of his first wife, as well as the somewhat “bad reputation” of Sarah Averill, immediately caused problems in the family. Years before, in November 1649, Sarah had been in court, having been accused of “too great intimacy with Thomas Wardell” in nearby Ipswich. Later, in the same year she married John Wildes, she was presented with the lesser offense of “wearing a silk scarf” in May 1663, also in Ipswich. Early on, problems appear between the couple and his first wife’s brother, Lieutenant John Gould and her sister, Mary Gould Reddington. This situation first became evident in the will of John Wildes, Jr., son of John Wildes and his first wife, Priscilla Gould Wildes. In John, Jr.’s, he makes reference to his inheritance from his grandfather Zaccheus Gould, hoping that his father might not be troubled by any claims made by his uncle, Lieutenant John Gould. Years later in 1686, John Wildes, Sr. testified against his ex-brother-in-law, Lieutenant John Gould, when he was charged with treason. In 1685, when King James II appointed Edmund Andros as the Royal Governor of Massachusetts, serious unrest occurred in the colony. After speaking out about his displeasure, John Gould was arrested for treason. He was found guilty of “uttering malicious treasonable and seditious speeches” in August 1686. After paying a fine, he was released; but he would never forgive his former brother-in-law, John Wildes. Shortly afterward, Mary Goulds Reddington began to spread witchcraft stories about Sarah Averill Wildes. John Wildes then threatened to sue Mary’s husband, John Reddington, for slander, but, Mary denied her previous statements. But, for Sarah Averill, the damage had already been done.

Making matters worse for Sarah, was the fact that the Goulds were related to the powerful Putnam family of Salem Village. On April 21, 1692, a warrant was issued for Sarah’s arrest based on a complaint made the same day by Thomas Putnam, Jr. and John Buxton of Salem Village. She and others were accused of afflicting Ann Putnam, Jr., Mercy Lewis, and Mary Walcott. She was arrested the next day by Salem Village Marshal George Herrick, who took her Salem Village, where she was examined by Justices Hathorne and Corwin at the Salem Village meetinghouse. In this examination and later ones, she would not only be accused by the afflicted girls, but also by Deliverance Hobbs, who had also been accused and just happened to have been arrested by John and Sarah’s son, Ephraim Wildes, who held the position of Topsfield constable. Deliverance would say that Sarah had brought her the Devil’s book to sign, to which Sarah replied “I am not guilty, sir… I never saw the book in my life and I never saw these persons before.”

Also arrested at the same time as Sarah Wildes, were John Wildes’ daughter and son-in-law, Edward and Sarah Wildes Bishop of Salem Village, and his daughter Phoebe Wildes Day of Ipswich. On May 13, 1692, 65-year-old Sarah was sent to the Boston Jail in fetters and handcuffs to await further trial. During her imprisonment, her husband, John, and their son, Ephraim Wildes traveled back and forth to see that Sarah was fed and clothed and to give her such comfort as they could.  There were a number of people during her trial or in depositions that provided testimony against her including Humphrey Clark, Thomas Dorman, John Andrew John Gould, Zacheus Perkins, Elizabeth Symonds, Nathaniel Ingersoll, and the Reverend John Hale. Sarah Averill Wildes was condemned for the practice of witchcraft. She was executed by hanging in Salem, Massachusetts, on July 19, 1692.

Ruth Wilford (1672-1708) – Ruth was born on November 15, 1672, to Gilbert and Mary Dow Wilford probably in Haverhill, Massachusetts. On August 18, 1692, an arrest warrant was issued for her upon a complaint sworn out by Timothy Swan of Andover. The complaint alleged that Ruth Wilford had afflicted Mary Walcott and Ann Putnam, Jr. She was arrested two days later and brought before the Justices of the Peace at Salem Village. No further information is known regarding the proceedings. She would later marry Thomas Ayer, also of Haverhill on June 12, 1694. The couple would eventually have four children. On August 29, 1708, she and her daughter, also named Ruth, were killed by Indian attack at Haverhill, Massachusetts.

John Willard (1657–1692) – A deputy constable at the time the witch hysteria erupted in 1692, John Willard would become one of the first to speak out against the madness, saying that the only “witches” were those that were afflicted. For this statement, he would pay with his life; being hanged as a witch himself on August 19, 1692. See full story HERE.

Sarah Lord Wilson (1648-1727) – Sarah was one of the many women in Andover, Massachusetts who were arrested after the infamous “touch test” examination conducted by the Reverend Thomas Barnard on September 7, 1692. Sarah Lord was born about 1648 in Ipswich, Massachusetts to Robert and Mary Waite Lord. Her father was a prominent resident of Ipswich who served as Town Clerk from 1645 until his death in 1683. On April 24, 1678, Sarah Lord married the widower Joseph Wilson of Andover and the couple would eventually have four children. In 1692 when the infamous witch hysteria began, Joseph and Sarah were living with their children in the south part of Andover and were active members of the Andover church.

On September 7, 1692, the Reverend Thomas Barnard called certain members of Andover’s elite to the meetinghouse. At the meeting, several of the Salem Village “afflicted girls” were present. After a short prayer, Reverend Barnard launched into a sermon describing the evils of witchcraft. He then began to conduct the “Touch Test,” one of the most diabolical schemes of the witch trials. After these tests were conducted, Justice of the Peace Dudley Bradstreet dutifully wrote out the arrest warrants for 18 men and women who had been accused in the touch test. These warrants included both Sarah Lord Wilson and her 14-year-old daughter, Sarah, Jr. After all these people were imprisoned and awaiting trial, the Reverend Francis Dane formed a resistance movement against the madness. On October 15th, a number of Andover children, including Sarah Wilson, Jr. were released on bail. The Reverend Dane would continue to work for the release of the other jailed members and in January 13, 1693, Sarah Lord Wilson was also released on bond. On May 10, 1693, both mother and daughter appeared at the Superior Court of Judicature at Ipswich and were cleared. The family remained in Andover after the witchcraft scare subsided. Joseph Wilson died on April 2, 1718. Sarah died in Andover on May 21, 1727.