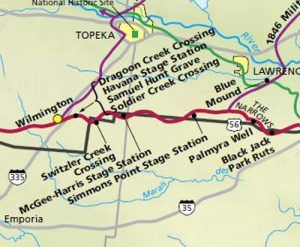 The Santa Fe Trail entered Douglas County, Kansas, near its southeast corner, a few miles east of the old town of Black Jack, before taking a northwesterly course through Palmyra and on to Willow Springs. Here, it turned to the southwest, passing close to the now extinct towns of Globe and Baden and into Osage County about three miles north of the southwest corner of Douglas County. 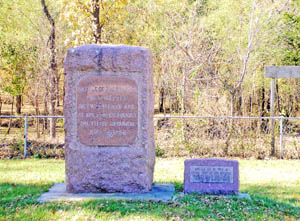 Located three miles east of Baldwin City on U.S. 56, Black Jack Highway Park commemorates what many say was one of the first battles of the Civil War, even though it took place five years before the war officially began. The Battle of Black Jack occurred June 2, 1856, when John Brown, a fierce opponent of slavery, led his militia against a pro-slavery force during the days of Bleeding Kansas.

An authentic log cabin in the park contains many antiques from the Santa Fe Trail era. A small footbridge and trail connect the park to the Ivan Boyd Prairie Preserve immediately to the south. Here, a dramatic set of parallel trail ruts can be seen, which are among the finest along the entire length of the trail.

Nearby, the Pearson Memorial Park is situated on E. 2000 Road, one-quarter mile south of U.S. 56 Highway, and is said by some to be the actual site of the Battle of Black Jack. 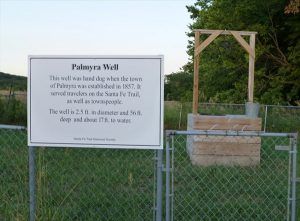 The old community of Palmyra grew along the Santa Fe Trail in the 1850s. The well provided water for trail travelers, their livestock, and community residents. This was a favorite place for repairing wagons and for rest. Palmyra had a post office from 1857 until 1862, when the post office name was changed to Baldwin City. Palmyra continued coexisting with Baldwin for several years but was finally absorbed into Baldwin. Palmyra’s presence has been commemorated with nearby markers. The well is located in present-day Baldwin City, Kansas, east of the high school.

The Palmyra area of Baldwin continues to be well-utilized by the city as both the middle and high school sit on land that was once Palmyra.

One-half mile to the northwest of Palmyra Well is the Santa Fe Trail Park. It contains a large granite Daughters of the American Revolution (DAR) marker. The diagonal county road adjacent to the park follows the exact route of the trail to the northwest. The property was donated to Baker University in 1907 and was recently placed on the National Registry of Historic Sites. Beyond here, the route traveled through “The Narrows,” a ridge that separated Wakarusa Creek on the north and the Marais des Cygnes River to the south. 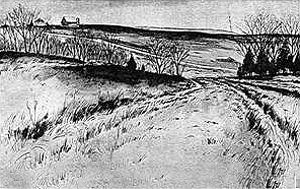 The Santa Fe Trail in the Vicinity of Black Jack. The ridge in the distance is the Narrows.

Along the “Narrows,” wagon trains had to stay on this ridge to avoid rough terrain and muddy draws. The Narrows ran from just west of present Black Jack Park, east of Baldwin City, to the site of Willow Springs, some nine miles to the northwest.

In May 1846, the U.S. Congress declared war against Mexico, and a month later, General Stephen W. Kearny’s Army of the West left Fort Leavenworth, Kansas. Leading his army, he left Fort Leavenworth on June 30, blazing a new trail from the fort to the Santa Fe Trail and the infamous “Narrows.” His first few days were extremely difficult as the soldiers and wagons struggled in seas of mud and encountered steep bluffs where the mules and oxen had to be unhitched, forcing the soldiers to haul the wagons by hand. Though it took days longer than they had hoped, they were finally successful, connecting up with the Santa Fe Trail on July 4.

Approximately three miles southeast of Lawrence, Kansas, this prominent hill, south of the Kansas River, rose to 1,043 feet above sea level and served as a landmark for travelers on their way to the Santa Fe Trail along the 1846 military road from Fort Leavenworth. Blue Mound is the larger and more prominent of two hills, sometimes referred to as the Wakarusa Buttes. It is located in Eudora Township. 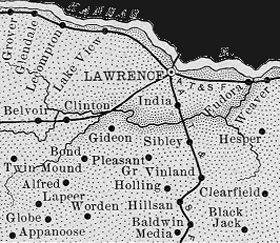 An extinct settlement area today, it was never large enough to have had a post office. It was located between Signal Hill on the east to almost Brooklyn on the west and stretching along the Narrows. During the days of “Bleeding Kansas,” a property dispute arose between neighbors, Charles Dow, a free-state man, and Franklin Coleman, a pro-slavery man, which ended in the brutal daylight slaying of Dow by Coleman. Charles Dow’s body lay on the Santa Fe Trail until his friend Jacob Branson came to claim it. The murder of Dow triggered a series of confrontations that later led to the Sacking of Lawrence, the Wakarusa War, the Pottawatomie Massacre, and the Battle of Black Jack. Wanting to distance the town from the negative attention and another town named Hickory Point in Jefferson County prompted the town to change its name to Stony Point, which is still used today. The site is located at North 650 Road between East 1500 & 1550 Roads. 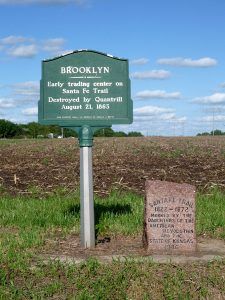 Brooklyn was settled as early as 1855 and was incorporated in 1858. William Quantrill’s men destroyed all but the saloon/general store as they retreated from burning down Lawrence in August 1863. A DAR marker is located slightly north of where the main cluster of buildings once was. The old townsite is located near North 550 & East 1400 Roads.

The trail then took a northwesterly course to Willow Springs, a good watering spot on the prairie, before returning to the southwest towards Simmons Point. A post office was established here in 1855, called Davis until 1861 when it was changed to Willow Springs. The town once also boasted a blacksmith shop, creamery, and a school. Today, the Willow Springs area is a small collection of houses, mostly farms, and the Willow Springs German Baptist Brethren Church. The old townsite was located near North 550 & East 1100 Roads. The Santa Fe Trail is slightly to the east of here. 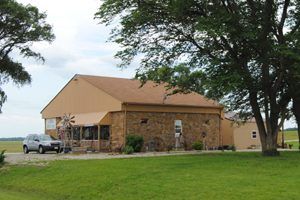 The only remaining building in Globe, Kansas

This community was first established in 1857 and called Marion. Located in the extreme southwestern portion of the valley of Eight Mile Creek, about 12 miles west of Baldwin City, it gained a post office in 1858. That same year, a store was opened by David Hubbard, and a few houses were built. Two years later, Hubbard expanded, and his facilities became known as Hubbard’s Stage Stand, including the small store, the post office, and stagecoach service.

Hubbard operated the stand from 1861 through 1863 when his business suffered the consequence of guerrilla warfare during the Civil War. Following the Diamond Spring Station raid in May 1863, Dick Yeager and his fellow brigands rode eastward on the Santa Fe Trail. They stopped at Hubbard’s place, shot the proprietor, stole a horse, and continued eastward. David Hubbard survived the shooting but soon abandoned his business and accepted a position in the commissary department of the Thirteen Corps, United States Army, in September 1863. The post office lasted until 1867, when it closed for two years, reopening in 1870. In August 1881, the town’s name changed to Globe. The post office shut down for the last time in 1900.

Globe and Hubbard’s Stage Stand, the first of the trading establishments in Kansas, was located seven miles east of the Osage-Douglas County line along present-day Highway 56 at North 500 Road. 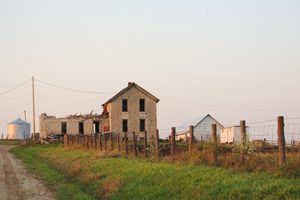 The area’s main feature is the abandoned Simmons Point Stage Station, the ruins of which are part of a privately owned farmstead. Phillip and Elmira Dodder Simmons operated the station, but its actual dates of operation are unknown. At one time, the property offered a small hotel. This is private property, and trespassing is strictly forbidden. A small cemetery is just west of the stage station on the north side of U.S. 56. Additional ruts are visible in fields on both sides of U.S. Highway 56, about 1.5 miles west of the stage station. The Simmons Point stage station is north of U.S. Highway 56 and 12 miles west of Baldwin City.

Baden was a small town located about one mile east of the Douglas-Osage County line. It was never really more than a collection of houses with a post office from 1883to 1886 and from 1888 until 1891. This site is the last marker in Douglas County, identifying a significant trail crossing point and the Baden Post Office.