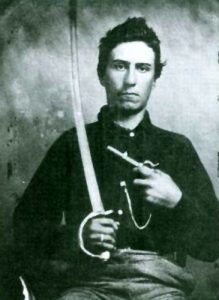 John Wilson Vermillion would grow up to become one of the many gunfighters in the Old West, with colorful nicknames like “Texas Jack” and “Shoot-Your-Eye-Out” Vermillion. He is most well known for his participation with Wyatt Earp in the Earp Vendetta Ride after the Clantons had killed Morgan Earp in 1882.

Vermillion was born in Russell County, Virginia, in 1842, the second of 12 children born to William and Nancy Owens Vermillion. When he grew up, he served as a Confederate soldier under the command of General J.E.B. Stuart during the Civil War.

When the war was over, Vermillion went to Indiana, where he married Margaret Horton in September 1865. The pair soon moved to Missouri, where Jack worked as a Territorial Marshal for the eastern section of Missouri.

He and Margaret had two children, a daughter named Mary and, soon, a son. However, just a few weeks after his son’s birth, Vermillion traveled when a diphtheria epidemic broke out in eastern Missouri. Unfortunately, by the time Jack returned home, his wife and children had succumbed to the disease. 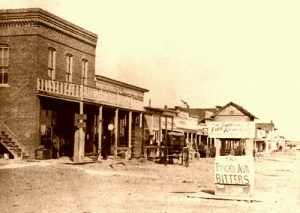 Grief-stricken, Vermillion headed westward, and by the late 1870’s he was in Dodge City, Kansas, where he was known to have drunk heavily, gambled often, and gained a reputation as a gunfighter. There he made the acquaintance of Virgil Earp, Wyatt Earp, and Doc Holliday.

A couple of years later, he was in Tombstone, Arizona, working as a special policeman for Virgil Earp in 1881. After the Gunfight at the O.K. Corral in October 1881 and Morgan’s murder in March 1882, Wyatt and Warren Earp, along with Doc Holliday, escorted the Earp family out of town before going on the well-known Earp Vendetta Ride, of which Vermillion was a part.

The following year, Luke Short, who was in Dodge City, Kansas, and in a feud with other businessmen, called upon Bat Masterson for help. Bat rounded up several gunfighters, including Wyatt Earp and Jack Vermillion, in what is known as the Dodge City War. Though the “war” never actually wound up violent, it threatened to be as some of the Old West’s best-known gunfighters lined up in support of Short.

While Vermillion was in Dodge City, he shot and killed a gambler cheating at cards, after which he appeared on a wanted poster as “Texas Jack Vermillion.” Where the “Texas” part came in is unknown. According to one tale, when Vermillion was asked why he was called Texas Jack, he replied: “Because I’m from Virginia.” Later, he also became known as “Shoot-Your-Eye-Out” Vermillion, allegedly because he had shot the man in the eye.

Soon, Vermillion was back in his home state of Virginia, where he married a woman named Nannie Fleenor in 1883 and had two children.

However, history finds him back in the west by 1888, when he joined up with Soapy Smith and his gang of con artists 1888 in Denver, Colorado. In August 1889, he was with Soapy, Bascomb Smith, and “Fatty Gray” Morris at Pocatello, Idaho. There, a rival bunco gang tried to assassinate Soapy, and a shootout occurred at the train depot.

Soon afterward, he left the gang and returned to Virginia, where he died peacefully in his sleep in 1911.