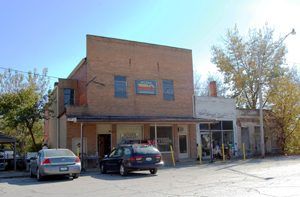 A Hardware Store and a few other businesses continue to operate in small town, McLean, Illinois, Kathy Weiser-Alexander.

As you continue your journey down Route 66 from Funks Grove, you will soon come to McLean, Illinois just about four miles down the road. This small town, with a population of only about 800 residents, still continues to collect hundreds of visitors at the Dixie Truckers Home, the oldest and best truck stop in Illinois. Filled with Route 66 memorabilia, the truck stop has been serving up burgers and fries since 1928.

McLean got its start in June 1855 when a man named Franklin Price, the brother-in-law of a Bloomington real estate developer, laid out the townsite. Price came to Bloomington from Pennsylvania in 1849, and initially working as a clerk and newspaper writer. In the same year that he founded McLean, he was elected mayor of Bloomington, serving from 1855 to 1858. He never lived in McLean, as, for Price, the development of the town was a business venture.

McLean was laid out when the Alton and Springfield Railroad was first built through McLean County. The nearby towns of Atlanta, Normal, and Towanda were laid out at the same time.

Almost two decades earlier, another town was established about two miles east of McLean in 1836. This settlement, called Mt. Hope, was founded as a colony by the Providence Farmers and Mechanics Emigrating Society of Rhode Island. However, it was not a success and when McLean was founded, the Mt. Hope church building was moved to McLean. The first building in the town was the railroad station, and the first residents, brothers, G.L. and F.A. Wheelock, who worked for Alton and Springfield Railroad. Before long, a blacksmith shop and a warehouse were established. 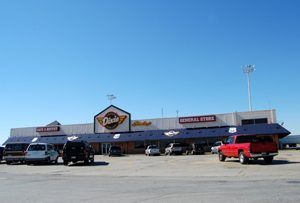 After Route 66 came through in 1926, a number of businesses were established to service travelers. One of these was the Dixie Truck Stop. The business first began as a mechanic’s garage, which also sold sandwiches. Established by J.P. Walters and John Geske, it was started with little more than a counter and six stools. However, it quickly gained popularity and by the mid-1930s had developed into a full-fledged restaurant complete with cabins in the back.

Not only popular to travelers, Dixie’s also brought in hundreds of area locals who enjoyed the live entertainment and music on the weekends. However, when World War II began, the festive weekends came to a screeching halt.  However, the restaurant and gas station continued to serve travelers by four generations of the Geske family until June 2003. Open 24 hours a day, 365 days per year, it never closed except one day when it suffered a fire in 1965.

The Dixie Truckers Home has since changed hands and has an updated look, but, still continues to stand along Route 66 serving the truckers and travelers of the Mother Road. 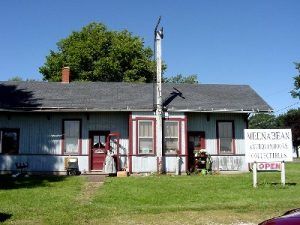 McLean’s original downtown business district still exists; and though there are still a few businesses, it looks a little ghosty. Several historic buildings can still be seen, as well as the restored train depot, which now serves as a train shop selling model trains and a visitor info center.

In just about five more miles, you’ll come to another small Route 66 town – Atlanta, Illinois. Here, you’ll find several remnants of vintage eras in this Route 66 proud town. Getting its start as the settlement of Newcastle in 1854, the village found itself over a mile from the railroad when the steam engine bustled through the area a year later. Moving the town — lock, stock, and barrel, nearer the railroad, the new settlement became known as Atlanta. 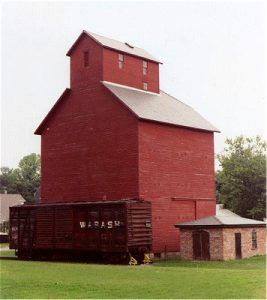 In 1903 the J.H. Hawes Elevator was built to serve the area farmers and continued to operate until 1976. In 1988 it was purchased by the City of Atlanta and fully restored in 1993. The wooden grain elevator is the only one of its kind in the State of Illinois and is now listed on the National Register of Historic Places.

Another museum resides at the Atlanta Public Library and Clock Tower, built in 1908. The octagon-shaped building is on the National Register of Historic Places, featuring  1840’s neo-classic details such as high ceilings, a domed rotunda, high narrow windows, the original solid oak woodwork, and an old fashioned fireplace. A museum was established in the basement in 1973 that houses pieces of local history. The library museum stands on the corner of Race and Arch Streets.

In the downtown area is a new Route 66 Park that celebrates the heritage of the Mother Road in Atlanta, the town that is known as the geographic center of Illinois on Old Route 66. The park is home to the hotdog man who stood for more than forty years in front of Bunyon’s Hotdog Stand in Cicero, Illinois. When the restaurant was sold in 2003, the famous Hot Dog Man was placed by the family on a permanent loan to the town of Atlanta as part of the park. The 19-foot tall statue, now referred to as “Tall Paul,” underwent months of renovation and repairs before being placed in the park. 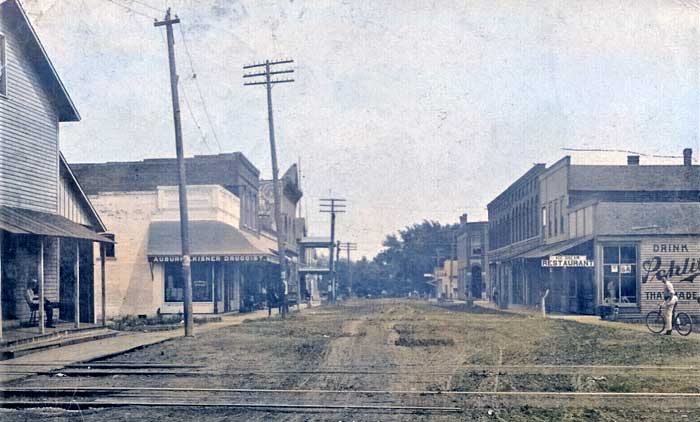 What would later become part of Route 66 through Atlanta, IL in the early 1900s. 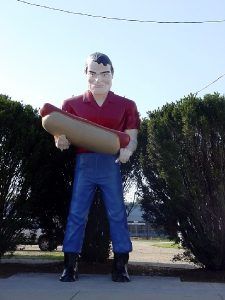 The Hot Dog Muffler Man stood for almost 40 years in Cicero, Illinois before it found a new home in Atlanta, Kathy Weiser-Alexander.

While cruising through this picturesque town, be sure to check out its many murals on the historic buildings. At 107 Vine Street is a vintage-era country market that has long served and a mom and pop grocery store.

Just four miles west of Atlanta is the Eminence Christian Church which was built in 1901. Prior to the current structure was another built in 1856. It is believed that the church has one of the oldest congregations in the country. Their membership hosts many fifty-year members, some of which are eighth-generation descendants of the charter members.

Keep your eyes open and your camera ready as your journey has just begun. Continue kicking asphalt on down to the historic cities of Lincoln, Broadwell, Elkhart, and more.

To Funks Grove and Shirley