Founded in 1736 on the western bank of the Savannah River, Augusta, Georgia became the second town of the 13th British colony. General James Edward Oglethorpe, the colony’s founder, ordered the settlement and chose its location at the head of navigation of the Savannah River. Oglethorpe’s vision was to establish an interior trading post for purchasing furs and other commodities from Native Americans to compete with New Savannah Town, a small outpost on the South Carolina side of the river. 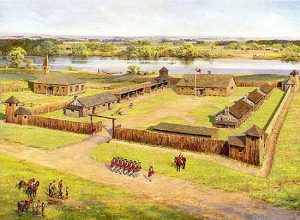 Augusta thrived as a trading post from the beginning, with several of the South Carolina traders moving their base of operations to the new settlement. By 1739 a fort was completed, and the official surveyor of the colony, Noble Jones, laid out the town. Its colonial plan was similar but not as elaborate as the one used in Savannah. Augusta’s plan focused on one large square or plaza and was four streets deep and three streets wide. Fort Augusta was adjacent to the 40 town lots on the west side near the river. Augusta named two of its original streets for Georgia’s colonial governors: Reynolds Street for John Reynolds, and Ellis Street for Henry Ellis. These streets are still prominent features of the Downtown Augusta, Broad Street, and Pinched Gut Historic Districts.

As traders populated the town, they brought their wives and began to have children. The desire for a more civilized atmosphere dictated the need for a church. As a British colony, Georgia petitioned the Society for the Propagation of the Gospel for a minister after constructing a church building in 1749. The first minister, the Reverend Jonathan Copp, arrived in 1751 and began conducting services according to the rites of the Church of England. After Georgia’s division into parishes in 1756, the Augusta District fell into St. Paul’s Parish, and the Augusta church became known as St. Paul’s Church. 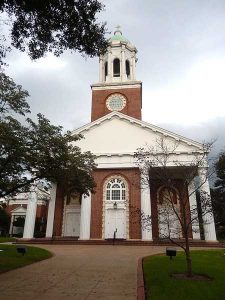 During the French and Indian War, refugees from the surrounding countryside came to Augusta, taking shelter in the fort and church. The building suffered significant damage in that period and was replaced in the 1760s. Soldiers coming to Georgia during the war spread the word about fresh lands, and in the early 1770s new settlers arrived to claim land grants in the surrounding countryside. Many had formerly been tobacco planters in Virginia and the Carolinas. They transported their tobacco culture to Georgia, where tobacco soon became the main cash crop of the colony. In approximately 1797, one of the last important tobacco merchants in Augusta built the Ezekiel Harris House (also known as the Harris-Pearson-Walker House), which is representative of that nearly forgotten economic factor in Georgia’s history.

Augusta played a significant role in the American Revolution as one of the westernmost towns in the 13 British colonies. The first of the two battles fought here, the Siege of the White House, resulted in the hanging of 13 patriot soldiers by Tory forces under Colonel Thomas Browne. After the second, called the Siege of Augusta, patriot forces, under the command of General “Light Horse” Harry Lee, retook the town. The British erected Fort Cornwallis on the site of the former Fort Augusta and in the process destroyed St. Paul’s Church. After the Revolution, a new church, built between 1786 and 1789 and lasting until 1820, served all denominations, although much of the time it had a resident Episcopal minister. The present building, the fifth on the site, dates from 1918 after a terrible fire destroyed 30 city blocks in 1916. 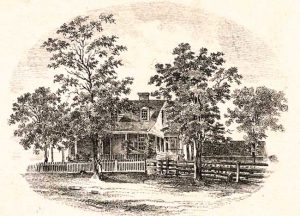 Meadow Garden in Augusta, Georgia still stands and today is a museum.

After the Revolution, Augusta became the temporary capital of the new state of Georgia between 1786 and 1795, and many of the leaders of the government moved to the town. One of the most notable was George Walton, a signer of the Declaration of Independence, who built his home, Meadow Garden, on what was then the outskirts of town. Walton held many important offices, including governor and judge. Walton Way, named in his honor, is the main artery through the Summerville Historic District, a suburban village originally laid out by Walton in the 1790s. In 1799 Christopher Fitzsimmons, a prosperous Charleston shipbuilder, built another outlying plantation house on his productive Savannah River plantation, the Fitzsimmons-Hampton House on Sand Bar Ferry Road. Henry Turknett lived at College Hill, another 1790s house, on property once owned by George Walton, who hoped to have the University of Georgia built there. Turknett Springs, located behind the house, provided Augusta’s first municipal drinking water, piped down the hill in hollowed-out logs beginning in the 1820s.

The town continued to grow in size and population governed by a group of Trustees of the Academy of Richmond County. President George Washington’s visit in 1791 was a highlight of this period. Legend has it that Augustans planted the large ginkgo tree in his honor at the proposed site of the Richmond County Courthouse, constructed in 1801 and now known as the Old Government House. The Trustees of the Academy built a new school building in 1802, the old Academy of Richmond County. 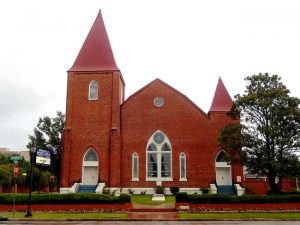 Augusta’s first suburb, part of the Augusta Downtown Historic District, was originally the village of Springfield. It was developed on lands confiscated from James Grierson, a Tory during the Revolutionary War. Captain Leonard Marbury laid out lots there on the west side of Augusta and built some houses. Augusta included Springfield within the city limits at the time of its incorporation in 1798. Because of their displacement from the Silver Bluff Plantation in South Carolina during the Revolution, a large population of free African Americans settled in Springfield by 1787. They established the Springfield Baptist Church there, one of the oldest independent black congregations in the United States.

Augusta continued to grow fulfilling the prediction of William Bartram, the naturalist, who said it would become the metropolis of Upper Georgia during his visit of 1774. Robert Mills, America’s first native-born architect, won the competition to design the First Presbyterian Church built between 1809 and 1812. Nicholas Ware built Ware’s Folly (Gertrude Herbert Institute of Art) in 1818 in the Federal style, reportedly for the astounding cost of $40,000.

As Georgia expanded westward and the states of Alabama and Mississippi attracted many of its prosperous planters, Augusta’s economy began to stagnate. The Charleston and Hamburg Railroad in South Carolina reached a point directly across the Savannah River from the heart of downtown Augusta in 1832. In 1833 the Georgia Railroad, chartered in Athens, Georgia, began building westward from Augusta toward a yet unnamed settlement that would eventually become Atlanta. Constructing the railroad attracted an Irish immigrant population to Augusta that has an important presence in the city today. Many were Roman Catholics, who joined the already well established Church of the Most Holy Trinity, founded in 1810 by French Catholics who settled in Augusta after the slave revolts on the island of San Domingo in the 1790s. For years the church’s name was Saint Patrick after its patron saint, in deference to its large Irish population.