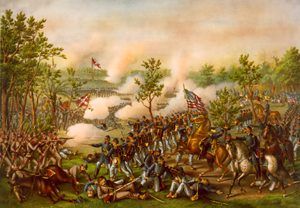 Georgia in the Civil War 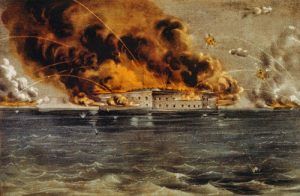 On January 19, 1861, Georgia seceded from the Union as the “Republic of Georgia” and on February 4, 1861 it joined the Confederate States of America. Most Georgians hoped to avoid war and peacefully leave the Union, but, when Fort Sumter, South Carolina was fired upon on April 12, 1861, the Civil War began. Governor Joseph E. Brown called for volunteers on April 18th and by October, some 25,000 Georgians had enlisted in Confederate service. That number would grow over the next several years.

Georgia was relatively free from warfare until late 1863 and the state changed its economy from one of cotton production to food production. Early in the war, the state’s 1,400 miles of railroad tracks provided a frequently used means of moving supplies and men but, for the Union, these tracks would soon became a target. The majority of the battles of Georgia occurred in the last two years of the Civil War and by the middle of 1864, most of its railroads lay in ruins or in Union hands.

Over the years a total of nearly 550 battles and skirmishes were fought in the Peach State. The first major battle resulted in a Confederate victory at the Battle of Chickamauga on September 18-20, 1863. It would be the last major Confederate victory in the west and the second costliest in the Civil War, after Gettysburg, Pennsylvania. In this conflict led by Confederate Commander, Braxton Bragg and Union Commander, William Rosecrans, almost 125,000 soldiers would be engaged resulting in an estimated total casualties of 34,624,  16,170 Union and 18,454 Confederate. 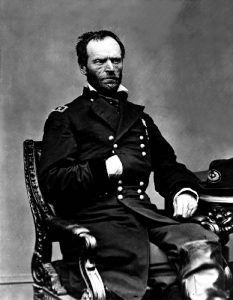 In 1864 General William T. Sherman’s armies invaded Georigia as part of the Atlanta Campaign. Confederate General Joseph E. Johnston fought a series of battles, the largest being the Battle of Kennesaw Mountain, trying to delay Union armies for as long as possible. President Jefferson Davis soon replaced him with a more aggressive commander, General John Bell Hood, who attempted several unsuccessful counterattacks at the Battle of Peachtree Creek and the Battle of Atlanta, but Sherman captured Atlanta on September 2, 1864.

In November, 1864, Union General William T. Sherman stripped his army of non-essentials, burned Atlanta, left it to the Confederates, and began his famous March to the Sea. After the loss of Atlanta, the governor withdrew the state’s militia from the Confederate forces to harvest crops for the state and the army.

As Sherman and his troops moved across Georgia, they lived off the land, burned plantations, cotton gins, and mills; wrecked remaining railroads, bridges and telegraph lines, and seized or killed the livestock. Thousands of escaped slaves followed him as the troops entered Savannah on December 22, 1864. Georgia’s militia did not try to stop Sherman or the Union soldiers. The march was devastating to Georgia and the Confederacy, both economically and psychologically.

When the Civil War was finally over, Georgia had lost more than 18,000 of her sons in battle, with countless others missing and wounded. The slaves were emancipated in 1865, and Reconstruction started immediately after the hostilities ceased. The state’s economy was in shambles and it remained poor well into the 20th century. Georgia did not re-enter the Union until June 15, 1870, the last of the Confederate States to be readmitted.