When we traveled this route last time, the “Dry Cimarron” River was flowing with water by Kathy Weiser-Alexander.

There are two reasons. First, it was the settlers traveling along the Santa Fe Trail, who, after experiencing 60 miles without water, gave it the nickname.

The other reason is that the area has two Cimarron Rivers very close to each other. The other Cimarron River flows through Cimarron Canyon State Park, where it joins the Canadian River. Some locals still refer to the other river as the Wet Cimarron.

The Dry Cimarron River was sometimes known as the “disappearing river” because of its notable feature of sinking and rising again further on. It flows from the foot of Johnson Mesa, cuts a deep canyon across the northern part of Union County, crosses a corner of Oklahoma, and finally empties into the Arkansas River near Dodge City, Kansas.

When the wagon trains of the early settlers came through, the Cimarron River was often dry, with the travelers frequently crossing the riverbed without even realizing they had been there.

The lack of water, coupled with Indian attacks, made the trip a hazardous one. Thunderstorms were also a problem when claps of thunder and lightning caused stampedes of horses and cattle. Wagon wheels bogged down in the deep mud when streams flooded. 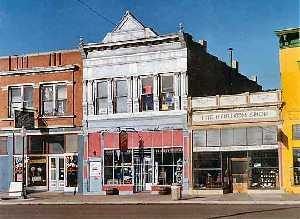 From Raton, the Dry Cimarron Scenic Byway makes its way east on New Mexico Highway 72 across I-25 for about 5 miles to its junction with NM Highway 526 and turns north along Highway 526 1.7 miles to Sugarite Canyon State Park. 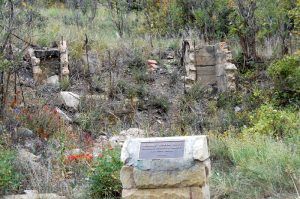 Ruins of the old Sugarite School House, by Kathy Weiser-Alexander.

Coal mining in the canyon began in 1894, and the town of Sugarite was established as a coal-mining town in 1912. Sugarite, a “company town,” was just one of seven towns in the Raton area built by the St. Louis, Rocky Mountain, and Pacific Railroad. In its heyday, it boasted up to 1,000 residents, a school, a theater, the Blossburg Mercantile Company, the Bell Telephone Company, an opera house, a physician, a justice of the peace, and a music teacher.

In addition to its history as a coal mining area, nature enthusiasts will appreciate the abundance of wildlife, birds, butterflies, and wildflowers among the lakes, creeks, forests, and meadows. Several outdoor recreation activities are possible, including fishing, boating, hiking, horseback riding, hunting, and camping. See the full article HERE.

Continue the journey along the Dry Cimarron Scenic Byway by returning to New Mexico Highway 72 and continuing east about five miles to the Yankee area. 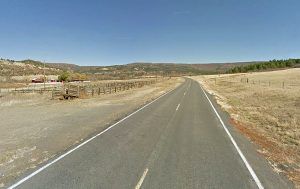 When settlers first moved west along the trails to this area, the grass was so tall and thick that it was necessary to navigate with a compass at times. On a knoll to the south, there used to be a mansion built by Yankee entrepreneur A.D. Ensign after the turn of the century. Before the settlement of Yankee was formed, farmers from nearby Johnson Mesa dug coal on the slopes of the mesa for their personal use. In 1904, the Chicorica Coal Company, backed by a Wall Street brokerage firm and the Santa Fe Railroad, promoted by the entrepreneur A. D. Ensign, developed the coal beds on Johnson and Barela Mesas. As the Yankee mines continued to develop, frame houses were built, and the population grew to several thousand residents by 1907, featuring a school and numerous businesses. The mansion that Ensign built was a beautiful two-story home that featured solid mahogany, velvet furniture, oriental rugs, and marble statues. But the Ensign estate changed hands several times, and by 1923 its treasures had been sold, and the mansion fell into a state of disrepair. All traces of Yankee have vanished, and a cattle ranch now occupies the site.

Atop Johnson Mesa in New Mexico by Kathy Weiser-Alexander.

Highway 72 twists and turns as the road climbs up to Johnson Mesa. Along the eight-mile drive, visitors will often see deer, turkey, and bear on this climb, as well as gorgeous views to the lower elevations. Suddenly the road takes a turn, and travelers find themselves on an enormous plain. On top of this high, grassy plateau, once sat the small community of Bell, a progressive farming settlement whose residents established the first telephone connections in New Mexico. Read our full article HERE. 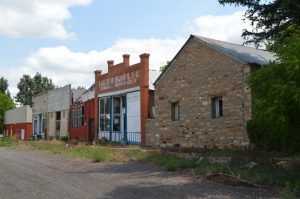 Buildings on the south side of Folsom, New Mexico by Kathy Weiser-Alexander.

As you continue the drive on Highway 72 headed for Folsom, the descent from the Mesa is spectacular. Folsom is 19 miles past the old settlement of Bell.

The coming of the Colorado and Southern Railroad in 1887 was the start of Folsom. Now a semi-ghost town, Folsom is a friendly ranching community with several historic buildings. The old railroad station, moved from the right-of-way around 1970, is now a private residence; the abandoned stone two-story Folsom Hotel still stands, as well as an old gas station on the corner, several false-front stores on the south side of Main Street; and the general merchandise store, built in 1896, is now a museum. 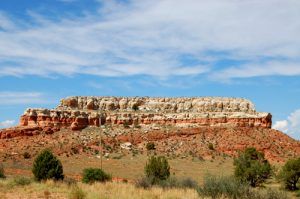 Continuing on NM 456, you will cross the Dry Cimarron River several times. At Travessier, there is a picturesque overlook, which is the entrance into the Dry Cimarron Valley, which narrows into a series of wild and wonderful sandstone formations. On the north side, you will see a particular colored sandstone formation called the “Battleship,” named in remembrance of the Maine. You will also see “Wedding Cake Butte,” a round mound rising about 300 feet above the valley floor, where its red, white, and brown layers of sandy rock gives it an appearance of a large layered cake. In the early days, many couples exchanged wedding vows atop this geographic formation. The drive along NM 456 is a refreshing change from the grasslands.

Just before the Oklahoma border, turn right (south) on Hwy 406 towards McNees Crossing. A state historic sign sits in the actual “ruts” of the Santa Fe Trail. The trail crosses the North Canadian River, also called “Corrumpa Creek” by people who live in the area. The crossing is named for a young scout of an east-bound caravan who was killed in the autumn of 1828 by Indians. A short distance to the north is a gate (close it if you go through). To the east is a windmill; nearby is a small marker erected in 1921 on the 90th anniversary of the first celebration of July 4, in what is now New Mexico. 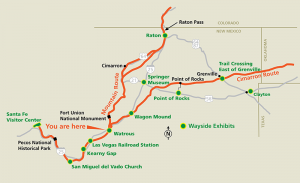 Continue on NM Highway 406 south towards Seneca and Clayton. You will cross traces of the Old Santa Fe Trail here and again through the Kiowa National Grassland. Many wonder why it’s possible to see so many Santa Fe Trail ruts more than 100 years after the trail closed. It’s a rule of geology that linear scars tend to perpetuate themselves – in other words, ruts are places for rainwater to run like a little stream, so they tend to keep eroding and perpetuate themselves. Clayton is approximately 23 miles from McNees Crossing. Turn right when you reach US 56 to Clayton.

North of Clayton on Highway 370, visit The Clayton Lake State Park to see the tracks left by at least eight different kinds of dinosaurs. Some 100 million years ago, this site was the shoreline of the Gulf of Mexico. The site is well interpreted and accessible by stairs and a boardwalk. Several of the tracks are unique or reported at only one other site in the world. 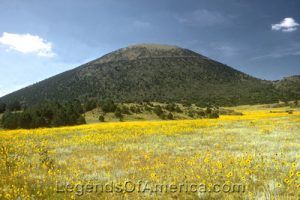 Capulin was a distinct landmark for those pioneers who traveled the Santa F Trail. Photo by the National Park Service.

Continue north on Highway 370, turn left on NM Highway 456 back to Folsom. From Folsom, Capulin Mountain is nine miles southwest on NM Highway 325, where you’ll pass Twin Mountain red cinder rock quarry where Black Jack Ketchum was caught. Learning that train robbery was not a viable career option, he was hanged in Clayton, where his body still rests in the cemetery.

The Capulin Volcano National Monument is the only volcano in the world where you can drive to the top and then walk down into the crater or hike the one-mile rim trail for a stunning panorama of the Raton-Clayton Volcanic Field. The volcano was withdrawn from public entry in 1891 but was proclaimed a National Monument by President Wilson on August 9, 1916. It now has a visitor center, a bookstore, and exhibits.

To the southeast of Capulin is Sierra Grande, the largest single mountain in the United States — 40 miles around the base and covering 50 square miles. Capulin Volcano National Park closes its doors at 4:30 p.m. — so try to get there by mid-afternoon at the latest. It’s just a short trip to Capulin, where one may find food and fuel and an RV camp, or from Folsom, it is eight miles to Des Moines for food, fuel, and lodging. 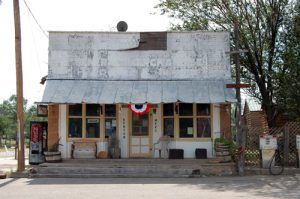 Up until 1890, there were no schools in what would become Cimarron County, in the Oklahoma Panhandle, and only two communities and post offices — in Mineral City, which claimed 98 inhabitants, and the other in Carrizo, which boasted some 83 people. Carrizo was established about a mile west of where Kenton would later be established.