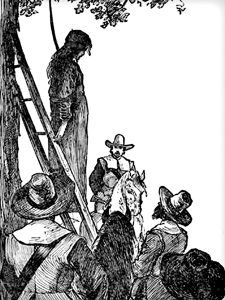 The first person to be convicted for witchcraft crimes and hanged for it in colonial America was Alice ‘Alse’ Young, a resident of Windsor, Connecticut. Some of her powerful contemporaries made sure she was killed at the gallows in Hartford, Connecticut, on May 26, 1647, forty–five years before the Salem trials began.

There were no spelling rules in those days, hence the variations in her name. No one knows where she came from or when she was born, although there are some theories that may ring true with further evidence. Ancestry sites are loaded with misinformation about her. The truth is if you go to an English ancestry site, you’ll find hundreds of people by the name of John Young from that period. The fact remains that there are no specific marriage records for John and Alice Young that definitively connect to the couple in Windsor, Connecticut. However, we know they were married thanks to a medical description about Young sent to an alchemical physician, John Winthrop Jr., in 1652, where Winthrop notes on the back of the notation that Young had been married to a woman hanged as a witch in Hartford.

A lot of information can be gleaned from Windsor Land Records. John Young bought a home lot on Backer Row in Windsor, Connecticut, in 1641, but he is mentioned in those land records earlier. He also owned a forty-acre plot of agricultural land on the Farmington River (then called the Little River) directly across that body of water from his home lot on Backer Row. The Backer Rowhome lot was located in the middle of several other lots of married sisters of the maiden name Tinker who were from Windsor, England. All of these women and their families, except for one, left Windsor, Connecticut, shortly after Alice’s hanging. The last one left no more than six years later. For these reasons, it is a reasonable possibility that either Alice or her husband were related to this family grouping.

Selling his land in Windsor in 1649, John Young moved to Stratford, Connecticut, where he “departed this life April 7, 1661” after several months of illness and was buried on April 8, 1661. He had no will. No heirs claimed his estate.

Alice Young Beamon, the likely daughter of Alice Young, married Simon Beamon of Springfield, Massachusetts, in Windsor, Connecticut, in 1654. They resided in Springfield and had many children there. Alice Young Beamon was verbally accused of witchcraft thirty years later as a widow in Springfield. Her family regarded it as slander, and one of her sons defended her. She was never indicted for a crime.

Since the daughter Alice married in 1654, it is unlikely that her mother was as old as forty years as some have suggested. There is no evidence for that age at death. No one has definitively identified any English records belonging to either John or Alice Young though some historians have offered speculations. 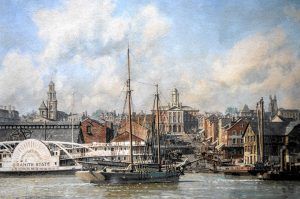 Although no trial records exist, many historians and scholars have postulated (based on actual records) that influenza or similar epidemic took hold of the town of Windsor when Alice’s accusations and she may have been made into a scapegoat. Indeed, looking at Windsor’s mortality records for 1647 in the Old Windsor Church Record, otherwise known as the Matthew Grant Diary, the death rate increased substantially that same year. People of important families in Windsor, including two children of the minister John Warham, died that year and the child of Bray Rossiter, the town doctor. Family members of legislative members and those living in proximity to the Young home also died. (Rossiter was the first person to perform an autopsy in the New World, starting the Hartford Witch Panic in 1662). In total, twenty-seven people died that year at a rate four and a half times higher than the death rate of six persons the previous year.

The only records that are known at this time directly pertaining to this event are from the diary of John Winthrop Sr. and the Matthew Grant Diary or the Old Windsor Church Record. Winthrop’s notation in the spring of 1647 states simply, “One ________ of Windsor arraigned and executed for a witch in Hartford.” The second record, listing the actual name, was not discovered until the late nineteenth century when the Matthew Grant Diary was found again after missing for over a couple of hundred years. Matthew Grant wrote on the inside cover, “Alse Young was hanged, May 26, ’47,” as discovered by historian John Hammond Trumbull.

Very few records exist in Connecticut pertaining to the witch trials. The hanging site for Alice and the ten other victims of the trials may have been near the Old State House when it was Hartford’s old town green or Meeting House Square. A jail was on the northwest corner of that place, and the stocks and pillory were also there. However, historian and minister William Deloss Love wrote in his book, The Colonial History of Hartford, that the hanging sites were located on a hill near Albany Ave. No records have been found to validate this statement. Others say that the site was at present-day Trinity College. However, many historians disagree with that supposition and state that it was the place of revolutionary hangings. In essence, no one has the answer to that question.

As awareness increases about Alice Young and more research is done, it is hoped that further facts will be found and added to this story and the histories of all of Connecticut’s eleven witch trial victims. The facts conveyed in this article can be verified in primary records, including Windsor Land Records and the Matthew Grant Diary. 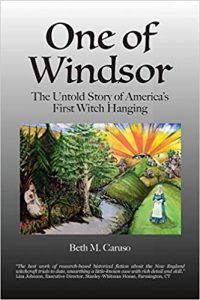 The Book, One of Windsor by Beth M. Caruso

About The Author:  Beth M Caruso’s first historical fiction novel is One of Windsor: The Untold Story of America’s First Witch Hanging (2015), a novel that tells the tale of Alice ‘Alse’ Young and the beginnings of the colonial witch trials. She based the story on her original research by exploring early primary sources such as early Windsor land records, vital statistics, and other documents. The Salty Rose: Alchemists, Witches & A Tapper In New Amsterdam (2019) is Beth M Caruso’s second novel and explores alchemy in early colonial times, an insider’s view of the takeover of the Dutch colony of New Netherland, and the Hartford Witch Panic with the information she gathered from previous and ongoing research. It is a follow-up historical fiction novel to One of Windsor. Beth is passionate to discover and convey important and interesting stories of women from earlier times. She lives in Connecticut with her family.