“The houses, streetscapes, and landscapes they constructed remain, in great measure unchanged, from the nineteenth century.”

Caledonia, Missouri is a small village located in the Bellevue Valley of Washington County. Today, most of the town has been declared a National Historic District. 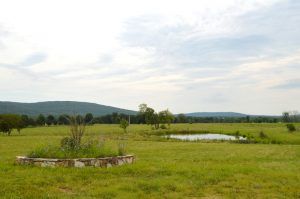 This area of the Bellevue Valley southeast of Caledonia, Missouri has been cleared. Photo by Kathy Weiser-Alexander.

The Bellevue Valley was first settled in 1798 by emigrants from Tennessee, North Carolina, and Virginia. At that time, the valley was heavily forested, but the land was fertile, so farmers, most of whom were Scotch-Irish, moved in to work the land. Today, the area is the most remote agricultural settlement of Spanish Upper Louisiana and is the oldest American farmers’ settlement of the Missouri interior. The economy in the valley was primarily agricultural, based on livestock, hay, and small grains. Nearby mining and metalworking industries provided employment, markets, and cheap iron and lead goods. In addition, the land was covered with both pine and hardwoods, and area residents supplied wood products to other communities.

By 1803, after the Louisiana Purchase had been made, a second group of settlers began to arrive from North Carolina who were Presbyterian Scotch-Irish. One of these men was Robert Sloan, who along with others, was attempting to establish a legitimate claim before the deadline of December 1803, after which Spanish grant claims were not to be honored by the new American government. Sloan built his home where the present-day Presbyterian Church still stands. Another wave of Scotch-Irish emigrants from North Carolina came in 1807 and area residents continued to lure residents to the area to make their own claims. 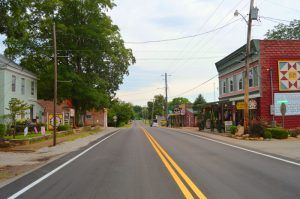 Methodist church members also acquired land north of where the townsite would later be established. Both the Presbyterians and the Methodists built log churches that served for generations before their churches relocated to “town.”

This area was originally a portion of the Miles Goforth Spanish Land Grant. Goforth sold some of his land to William Buford, who came from Virginia in about 1812. Buford built a home in 1816, which still stands today in Caledonia.

By 1817, at least three businesses and two residences were grouped near the banks of Goose Creek. These included Fergus Sloan’s blacksmith shop, Joshua Morrison’s distillery, and Alexander Craighead and Andrew Henry’s store. By this time, Andrew Henry had achieved a modicum of fame in Missouri history as he was associated with William H. Ashley in the Rocky Mountain fur trade. He had come to Ste. Genevieve in 1804 from southeast Pennsylvania when he was 29 years old and married a daughter of a prominent Creole family. He was a founding partner in 1808 of the original American Fur Company and was a principal in the 1809-1812 expedition to the Upper Missouri River. In the War of 1812, he became a major and was second in command to Ashley, of the Sixth Missouri Regiment from Washington County. 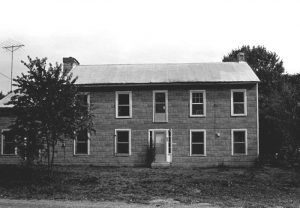 The Craighead-Henry House & Store is the oldest building in the Caledonia Historic District.

Miles Goforth later sold the rest of his Spanish Land Grant claim to 26-year-old Scotch-Irish entrepreneur Alexander Craighead, who laid out the town of Caledonia in 1818. He named the village after Scotland (Caledonia is Latin for Scotland) and sold lots from $1.50 to $5.00 per lot in 1819.

Craighead became the first postmaster when a post office was established in September. The first two businesses were Tom Sloan’s Blacksmith Shop and Fergus Sloan’s Brewery. The brewery, however, didn’t last long because the Methodists protested and it was soon out of business. The new town of Caledonia was the first official village in the Bellevue Valley and would soon become the foremost town in the St. Francois Mountains. The Craighead-Henry house and store, probably built before the town was platted in 1818, is the oldest property in the historic district. It is located on College Street.

The families Eversole and Peery were Virginians who became pioneer entrepreneurs of the Bellevue Valley. In addition to being farmers, they opened stores, built mills, and established an ironworks, the Springfield Furnace, between Caledonia and Potosi in 1823. Partners in the Springfield Furnace were Andrew Peery, Jacob Eversole, and Martin Ruggles, one of the earliest emigrants into the valley. Peery and Ruggles put up the money and Eversole, who was an engineer, built the plant. The three also erected a grist and sawmill a few miles downstream from the furnace, which they soon passed to another newly arrived Virginian, Andrew Hunter, and his son John. The Hunters would operate the mill for many years.

Martin Ruggles was from Massachusetts and had acquired his own Spanish land grant. He also had an entrepreneur’s crucial edge of education, talent, ambition, and wealth. Over the years, he was the first trustee of the Methodist Church property, an elder of Concord Presbyterian Church, and the Master of the Masonic Lodge. By the time of his death in 1840, he had become a money lender and owned substantial real estate holdings. 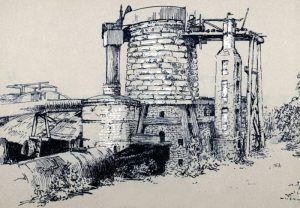 The furnace, built on the bank of Furnace Creek, was the earliest attempt in Missouri to smelt iron ore and was first called the Eversol, Peery and Ruggles Iron Furnace, after the owners. It, along with its subsidiary, the Cedar Creek Forge, first processed ore from Olaer Creek and Iron Mountain. The furnace succeeded where early operations had not because its owners were merchants and businessmen, not just smelters. They advertised as far away as St. Louis, and offered for sale an amazing array of goods including bar iron, custom castings, fireplace backs and jambs, brine kettles, mill iron, lead ore wagon boxes, lead molds, steamboat furnace grates, windowsills, sugar mill rollers, steam engine cylinders and pipes, and domestic holloware such as pots, kettles, skillets, and ovens. They also gained a government contract to produce cannonballs during the Blackhawk War of 1832. Certainly, Springfield Furnace was the first Missouri ironworks to produce so many products and market them so widely.

In addition to the reduction of iron ore and the finishing and marketing of iron goods, the place was a beehive of services and commerce. Lumber was sawed; saws, axes, and miners’ tools were sharpened and repaired; horses and mules were shod, wheel hubs were made, and wagons repaired. The furnace used a lot of charcoal, so the owners created a subsidiary industry in charcoal burning for local producers.

The partners also built a general merchandise store that sold meat, dairy products, salt, groceries, textiles, hardware, shoes, boots, gloves, sewing materials, medicines, etc. It was certainly the largest and best-stocked store in the Bellevue Valley. It grew to be a large complex that provided jobs a brought much-needed cash into the local economy. Sometime between 1828 and 1830, John Peery purchased the works from the others, and it became known as Peery’s Furnace. In later years it was called the Springfield Iron Furnace and continued to operate until 1842.

These four families — Ruggles, Peery, Eversole, and Hunter, together with their kin and in-laws, were exemplary builders of Caledonia and helped to assure Caledonia’s prosperity. 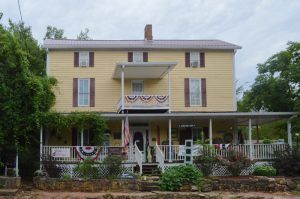 In 1824, Jacob Fischer built a building on present-day Main Street as the Stage Stop Inn, at which time the stagecoach would drive up on a stone road to the front of the Inn and passengers would disembark for a stay. Originally, the house had twelve rooms and a dirt floor basement. The back of the house contained separate quarters for the slaves. In the late 1840s, underground tunnels connected this house to the Jane Thompson house to the south, the Ruggles house to the north, and crossed under present-day State Highway 21 exiting outside in the vicinity of a nearby creek. The slaves were at one time jointly owned by the families in these three homes and the tunnels were used to get from one building to another and as a passage to work in the nearby fields. Local lore says that these tunnels also once served as part of the Underground Railroad. During the Civil War, this building served as a temporary hospital ran by the Union forces for soldiers wounded in the nearby Battle of Pilot Knob.